DEFCON is a U.S. military term that stands for Defense Readiness Condition.

This is part of a system that indicates the level of threat the U.S. faces, or may face, from other countries and the readiness of a potential military response to such threat.

Read on to see how that is calculated, and more.

Why Are We At DEFCON Level 3?

The U.S. is currently reported to be at DEFCON 3 due to the situation and conflict between Russia and Ukraine.

The circumstances brought about by Russian attacks in Ukraine has also led to tension between Russia and NATO.

In addition, this has created global backlash against Russian aggression, including imposed sanctions and other restrictions.

As a result, the U.S. is at DEFCON 3, meaning that certain units are in a state of preparedness for immediate response and deployment if necessary. 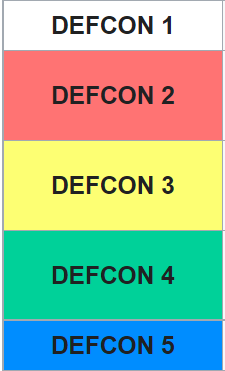 Defense Readiness Condition, or DEFCON, is a system utilized by the Armed Forces for identifying threat levels to the U.S. and military response readiness.

U.S. Joint Military Command and the Joint Chiefs of Staff indicate the DEFCON alert rate for the military as a means of establishing a specific level of required military readiness in response to potential attacks.

It’s important to understand that DEFCON levels are not applied across all U.S. Armed Forces or even individual units at the same time.

DEFCON 1 level is considered the most severe readiness condition in terms of threat and response.

At this level, the military is at maximum readiness to immediately respond to threats or attacks, and those related to nuclear warfare in particular.

This means that all necessary troops are mobilized and prepared to deploy and fight at a moment’s notice.

DEFCON 2 level is considered the second most severe readiness condition in terms of the military’s response to threat.

Again, this level is also related directly to the imminence of nuclear attack.

This means that any necessary units of the U.S. Armed Forces are ready to deploy and fight within six hours or less.

DEFCON 3 indicates that select forces are ready to deploy where needed in 15 minutes.

This level means that there is an increase in the readiness of U.S. forces above what would be considered normal.

Such response readiness would most likely apply to relevant and necessary security forces as opposed to the military as a whole.

DEFCON 4 indicates readiness that is above normal.

This typically means that there is an increase in gathering intelligence as well as tightening of security measures.

DEFCON 4 is a common state of readiness among many military units and bases across the globe.

The lowest state of readiness for the U.S. military is DEFCON 5.

It indicates “normal” or peacetime level of threat and response.

This level is considered the baseline of alert for the military during periods of no active or impeding conflict.

The Department of Defense introduced DEFCON as a military alert system in 1958, approximately a decade after the beginning of the Cold War.

The DEFCON system was created after the North American Defense Command (NORAD) was established with Canada.

At first, DEFCON indicated three readiness levels (normal, increased, maximum) and then added five more until the system was simplified into its five current levels.

It’s important to consider the historical Cold War context of DEFCON in that the levels are tied specifically to nuclear threats.

The Cold War was a period of tension between the United States and the Soviet Union, along with the allies of each nation.

The development of nuclear weapons and the threat of nuclear conflict between the U.S. and Soviet Union were at the center of the Cold War.

This is especially true of DEFCON 1, indicating an imminent or in-progress nuclear attack, and DEFCON 2, indicating a strong likelihood of nuclear war.

Though some countries have similar systems, DEFCON threat warning levels apply only to the U.S. military.

In addition, not all changes in DEFCON levels affect the entire U.S. military or Department of Defense (DOD).

For example, the DOD may remain at a different DEFCON level than a specific military unit, base, or mission.

Here are some historical examples of DEFCON levels:

DEFCON 1 is an alert that indicates the most severe and/or dangerous threat situation.

Therefore, this level is reserved for imminent nuclear war with the United States or one of its allies.

This is a state of maximum readiness in response to an impending nuclear war.

In addition, if the U.S. were fighting a nuclear war in progress, DEFCON 1 would surely be the indicated level.

The U.S. has declared DEFCON 2 during two historical instances.

First, DEFCON 2 was issued as an alert on October 22, 1962, in response to the Cuban Missile Crisis.

Reportedly, this alert level was applied to Strategic Air Command whereas the rest of the U.S. Armed Forces were at DEFCON 3.

Second, on January 15, 1991, the Joint Chiefs of Staff indicated DEFCON 2 as the opening phase of Operation Desert Storm began in the Persian Gulf.

This was the beginning of the Persian Gulf War.

There have been a few historical events that have led to DEFCON 3.

Most notably, during the attacks on September 11, 2001, Secretary of Defense Donald Rumsfeld ordered the level of DEFCON 3.

There was also reportedly an order to stand by for a potential increase to DEFCON 2.

In August of 1976, U.S. forces in South Korea were at a readiness level of DEFCON 3.

This was in response to an axe murder incident at Panmunjom which led to Operation Paul Bunyan.

In October of 1973, Egypt and Syria jointly attacked Israel, marking the beginning of the Yom Kippur War.

Within approximately two weeks of this attack, the following U.S. forces were placed on alert at DEFCON 3:

This elevated alert was in response to concerns of Soviet Union intervention in the conflict.

Certain documents declassified over 40 years later indicate that there were CIA reports of a Soviet Union ship that had been sent to Egypt carrying nuclear weapons, which motivated the level of DEFCON 3.

This state of alert lasted for a few days.

In general, DEFCON 4 is declared once situations have “normalized” after alert levels of DEFCON 3 or higher.

For example, a few days after the attacks of September 11, 2001, the DEFCON level was decreased from 3 to 4.

DEFCON 4 is, in a sense, the default level of Defense Readiness Condition for specific military units at any one time.

DEFCON 4 would likely apply in particular to strategic military units.

This is due to the fact that certain U.S. entities are perpetually gathering intelligence and strengthening security as a result of international fluctuations and overall global uncertainty.

DEFCON 5 indicates the lowest state of readiness or “peacetime.”

Since the development of the DEFCON system was a product of the Cold War and nuclear arms race, it’s difficult to determine whether the U.S. Armed Forces has ever been unilaterally set at DEFCON 5.

However, there are likely units and even bases within each particular military branch that are set at DEFCON 5 during periods when there is no active conflict or anticipation of such.

It’s difficult for members of the public to know of DEFCON levels with certainty, whether in the present or past.

For security purposes on behalf of the U.S. military and citizens, DEFCON levels are highly classified and unpublished.

In addition, though this system may appear out of date to some because of its Cold War origins, the Department of Defense continues to rely on DEFCON levels.

This is to keep military troops in a state of readiness to respond to attacks, especially those of a nuclear nature, during impending or existing armed conflicts.

The use and development of nuclear arms are not prohibited by many nations across the globe.

Therefore, the DEFCON system is likely to remain part of the U.S. Armed Forces.

Moreover, the five DEFCON levels are designed to step up military readiness in response to overall threat level whether or not it’s of a nuclear nature.

Officials do not announce or release such information to the public for security reasons and to avoid the possibility of creating panic for U.S. citizens.

Therefore, only the highest-level members of U.S. government intelligence and high-ranking military and government officials are notified of DEFCON levels.

When was the last time we were at DEFCON 4?

The last time the U.S. was at DEFCON 4 was prior to Russia’s aggression against the border of Ukraine.

Who controls the DEFCON level?

The DEFCON level is controlled by the U.S. Joint Military Command and the Joint Chiefs of Staff.

This Defense Readiness Condition is a scale indicating five states of alert used by the U.S. military.

Therefore, this system is controlled by only the highest level of intelligence, government, and military officials and personnel.

What is the highest DEFCON level reached?

The highest DEFCON level reached in the U.S. is most likely DEFCON 2.

This reportedly took place during the Cuban Missile Crisis in October of 1962, and the Persian Gulf War beginning in 1991. 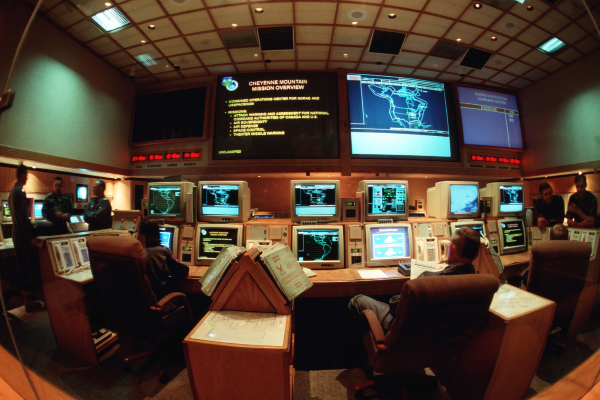 We are currently at DEFON level of 3. Find out why that's the case, as well as how the DEFCON level is determined and who sets it.