The U.S. Coast Guard has standards and expectations like every other branch of the military.

Personal appearance is something that the military takes very seriously from the uniform down to facial hair and tattoos.

The Coast Guard permits tattoos in certain places yet has restrictions on other parts of the body.

Furthermore, the content of the tattoo is also studied by the military branch in order to determine appropriateness.

In a nutshell, the Coast Guard tattoo policy can be summarized as follows:

Here’s a look at the tattoo policies in more detail.

What Tattoos Are Allowed In The Coast Guard?

The Coast Guard serves as maritime law and coastal defense for the United States.

As a result, you would expect the Coast Guard tattoo policy to align closely with the U.S. Navy, which is partly true.

Though the Coast Guard has made minimal updates to its tattoo policy over the last few years its standards remain fairly liberal in terms of body art.

The last sweeping changes were unveiled in 2020, with a few additions for the beginning of a new decade.

According to the Commandant Instruction 1000.1C, the purpose of the standards is to:

“Ensure our workforce presents a sharp, professional military appearance to the public, while allowing individual expression through authorized body art that is consistent with the Coast Guard’s Core Values.”

The Coast Guard tattoo policy extends to not only new recruits, but all unit commanders, officers, officers-in-charge, deputy/assistant commandants, and chiefs of headquarters staff.

Tattoos are permitted in the Coast Guard on most parts of the body.

There are no restrictions on the amount, size, or percentage of coverage of tattoos apart from the head, face, neck, and hands.

Each body branding is limited to a 4-inch x 4-inch area.

Tattoos sleeves (full and half-sleeves) are also authorized in the U.S. Coast Guard.

It is the only military branch to allow these types of body art in most situations.

The Coast Guard allows cosmetic tattoos in order to cover up scar tissue or to make other medical issues less prominent in appearance.

Lastly, permanent makeup that can consist of tattoos is only permitted on female members.

It must also be “conservative, in good taste, and complementary to the wearer’s complexion and the uniform”.

Permanent makeup cannot be brightly colored or extend past the outer corner of the eye.

It also cannot reach a width of more than 1/8 inch.

What Tattoos Are NOT Allowed In The Coast Guard?

While the Coast Guard tattoo policy is pretty liberal, there are a few major no-nos.

The Coast Guard regularly inspects ‘Coasties’ for tattoos and brands in order to make sure they remain in compliance.

The military branch does not allow tattoos on the head, scalp, face, neck, or majority of the hands.

Otherwise, tattoos on the neck and hands are generally not authorized unless you are granted a waiver.

The Coast Guard considers your hand any flesh of the body that exists below the wrist bone.

Furthermore, Coasties are not allowed to have any type of body mutilation.

Mutilations are described by the Coast Guard as “intentional alterations and/or modifications to a member’s body”.

These can include things like intentional scarring, excessive piercings, tongue splitting, or skin decorative implants.

The Coast Guard, like other uniformed branches, has less of a tolerance for the content of tattoos compared to its placement on the body.

Consequently, there are several types of tattoos that are strictly forbidden in the Coast Guard.

In short, tattoos or brands anywhere on the body that promote racism/discrimination, indecency, extremist or supremacist philosophies, violence, lawlessness, or sexually explicit material is prohibited.

The Coast Guard acknowledges that it is difficult to evaluate every single tattoo in the military that may violate content policies.

Therefore, care is taken when evaluating tattoos or brands in order to not implicate personnel who may have selected the ink based on its artistic value rather than a hidden meaning.

Related Article: 18 Pros And Cons Of Joining The Coast Guard

Here are some of the more frequently asked ones:

Can you have a full sleeve tattoo in the Coast Guard?

Yes, the Coast Guard does not place any restrictions on arm or leg tattoos, unlike the U.S. Marines.

Military personnel in the Coast Guard are allowed to sport both full and half-sleeve tattoos on the arms or legs.

Just make sure that the content of the tattoo sleeve does not violate any of the inappropriate/offensive issues listed under the Coast Guard tattoo policy.

Can you have neck/face/hand tattoos in the Coast Guard?

In general, no, but some small tattoos are allowed on the hands.

Head, scalp, and face tattoos are not authorized in the Coast Guard, like every other military branch, and for good reason.

Meanwhile, hand tattoos were once prohibited yet under the new policy service members are authorized one hand and two finger tattoos per hand.

There are restrictions on the size of hand and finger tattoos in the Coast Guard.

Lastly, neck tattoos are not authorized in the uniformed branch.

Will the Coast Guard pay to remove tattoos?

The Department of Defense does not generally provide funding for tattoo removal.

If you are ordered by the military branch to remove a tattoo that violates its policy you may request financial support through a medical procedure, yet nothing is guaranteed.

However, there are several affordable tattoo removal options on the market.

Are Coast Guard officers allowed to have tattoos?

Yes, the Coast Guard tattoo policy states that officers are held to the same standards as enlisted personnel.

Coast Guard officers are also responsible for the appearance of the Guardsmen under their supervision, including compliance with the tattoo policy.

Can you get a waiver for tattoos in the Coast Guard?

The military does grant waivers for a variety of issues that otherwise would violate one of their policies.

Therefore, it is possible to receive a waiver from the Coast Guard for your tattoos yet it isn’t something you should count on.

Regardless, the Coast Guard is more likely to grant a waiver for body placement violations compared to content violations.

What happens if you violate the Coast Guard tattoo policy?

According to the Coast Guard tattoo policy, active duty or reserve members whose tattoos or brands violate the policy have a couple of options.

A) The service member may seek medical advice regarding the removal or alteration of body art in order to reach compliance.

Or B) refuse to change or remove the tattoo and face disciplinary action.

Coasties that are unwilling to follow the orders as outlined in the Uniform Regulations manual are administratively separated from the maritime branch.

What other grooming standards does the Coast Guard have?

The Coast Guard has looser standards for personal grooming compared to other military branches.

Despite that fact, there are still several things that are prohibited in the Coast Guard.

Haircuts are tightly regulated for both male and female personnel.

Additionally, men are only permitted to have mustaches and sideburns with stipulations.

Beards or any other type of facial hair is not authorized in the U.S. Coast Guard.

Body piercings are also prohibited with the exception of women who may have one pair of studded earrings.

Regardless of the sex, no piercing “shall be made through the ear, nose, tongue, chin, eyebrow, or any other body part that would be visible while in uniform”, according to the manual.

Other types of piercings that are concealed by a uniform (i.e. nipple piercings) are strongly discouraged due to the potential for infection and medical complications.

The Coast Guard tattoo policy for 2021 is designed to strike a balance between personal expression and military professionalism.

Coasties appreciate a fairly liberal tattoo policy that allows ink on most parts of the body aside from the head and face.

While there are exceptions on neck and hand tattoos, as well as what types of body art are permitted, overall there are plenty of ways to express yourself in the military branch. 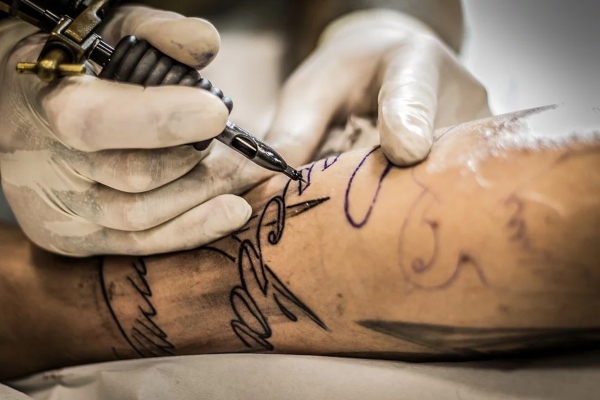 The Coast Guard has some of the most stringent tattoo policies of any of the 5 branches of the military.