The U.S. Marine Corps is one of the more desirable branches of the military that new enlistees seek to join. The specialized branch is responsible for conducting amphibious and expeditionary operations for the U.S. Military.

The current figures claim that the USMC has approximately 186,000 active duty members.

Like other branches of the military there is a structured system regarding military ranks and pay.

For a more detailed summary and breakdown of Marine rankings and 2021 base pay, please continue reading below.

Marines Ranks And Pay For 2021 – Enlisted

The U.S. Marines reward long-term members as well as those assigned more responsibility. Therefore, expect your average monthly pay to get determined by rank as well as years served.

The pay in the Marines increases steadily over a military career in any rank. Some rankings eventually reach a peak in terms of maximum amount of money you can earn monthly.

Review the charts below to see how Marine ranks determine pay based on number of years served:

The pay rates posted above do not include a variety of bonus and benefits exclusive to U.S. Marines and other branches of the military.

Additional incentives, pay, and bonuses for serving the Marines may include:

It is important to verify with your local recruiter all the benefits you can receive serving the U.S. Marine Corps.

Marines Ranks And Pay For 2021 – Officer

Next, let’s take a look at the ranking structure for officers in the Marines:

Along with the pay charts for enlisted personnel, the above figures for monthly pay are the absolute minimums. Marines will at least earn the posted amount per month based on rank and years served.

Finally, it is time to study the pay charts for warrant officers of the Marines. Warrant officers are classified above enlisted Marines yet not as high up in ranking or pay as designated officers.

What is Marine Corps pay grade?

Marine Corps pay grade is a designation for enlisted pay. Starting with E-1 through E-3 for the lowest ranks. Non-commissioned officers (NCOs) have pay grades of #E-4 and E-5, while Staff NCOSs are Marines serving in grades E-6 through E-9.

What is a Marine’s starting salary?

Most enlisted Marines start out with a pay grade of E-1. After boot camp, an E-1 with less than two years in service can currently expect a monthly base pay of about $1,700 per month, not counting allowances.

How do Marines rank up?

To gain rank above E-4, Marines must serve time in their grade and the service. The Marines have a designated slot for every pay grade in each position, so there must be an open slot for promotion.

Do Marines get paid more than Navy?

Pay for servicemembers is equal across all branches of the U.S. military. So, an E-3 in the Marines makes the same amount as an E-3 in the Navy. Different branches may have more room for advancement, depending on the job.

Do Marines get paid for life?

Military retirement can start after 20 years in service. At 20, members receive a pension equal to half their base pay. This percentage increases until the 30-year mark when retirees receive 75% of their base pay.

Fulfilling a career in the U.S. Marines is one of the best honors that any member of the U.S. military can ask for. It can also come with steady, reliable pay and multiple promotion opportunities.

If you have more questions about expected monthly pay and other military benefits, contact a local Marine recruiter. 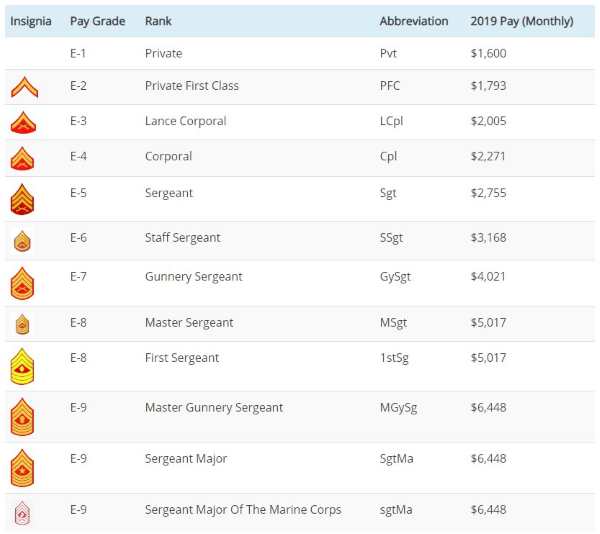 Learn more about the ranks and pay for US Marines. Includes details on the pay rates for both enlisted and officers, as well as how much pay increases year over year.