The U.S. Marine Corps (USMC) is a very demanding branch of the military that requires efficiency both on land and in the sea.

As a result, the physical fitness requirements of the U.S. Marines is intense.

The Marine Corps has physical fitness test (PFT) standards that you are required to meet upon arrival at basic training, as well as each year after becoming a Marine.

In this article, you will learn about the physical requirements based on gender and age.

Jump To A Standard

The U.S. Marines have frequently been updating their PFT standards over the course of the last five years.

The PFT test involves three events: pull-ups or push-ups (your choice), crunches or a plank, and a three-mile run.

In order to prepare for the initial Marines PFT standards, we recommend training and attempting to meet the following conditions based on your age group.

Please note that you need to get a score of at least 40 points in each category.

It is considered the bare minimum for being allowed to continue training for the U.S. Marines.

A new addition to the PFT is the option to do a plank instead of setups. Notice that the scoring table remains consistent across all age groups and gender. As of right now, no matter age or gender, the scoring is the same. It’s possible that this may change in the future as the Marine Corps collects data from PFTs.

The high altitude run point system is adjusted only for those units conducting the 3 mile run at or above 4,500 ft mean sea level.

One last thing to note is the push up or pull up test. Marines are encouraged to choose pull ups over push ups as it’s a better field test of upper body strength. The max amount of points a Marine can get with push ups is 70, whereas a Marine has the possibility of getting the complete max of 100 points with pull ups.

Women are often overlooked in their role with the U.S. Marines.

The Marine PFT standards for females is also divided based on age group.

Once again females are tested in pull-ups or push-ups, crunches, and three-mile run.

As it is for the males, the row event is an optional alternative for Marines aged 46 or older or if the Marine is postpartum or injured. If the Marine is younger than 46, approval is required from the Commanding officer.

The three-mile run is also adjusted if the Marine has to test at high altitude at or above 4,500 ft mean sea level.

Related Article – How To Lose Weight For The Military: Your 30-Day Plan

The Marine Corps have been adjusting their PFT standards since 2015. The Marines recently updated their age brackets and exercises.

The new changes have also introduced the option between deciding to test for push-ups or pull-ups.

However, if you do decide to do push-ups you are not able to receive full marks like you would with pull-ups.

Additionally, the U.S. Marines will also allow enlistees and members to replace crunches with the plank pose.

How is the Marine Corps PFT conducted?

The Marine Corps physical fitness test consists of three events. All of the events are conducted in a single session.

However, you are given up to two hours to complete all three activities.

First, Marines have the option between testing for pull-ups or push-ups.

Please make sure that you understand the Marine Corps PFT standards for both activities based on gender and age group.

You must get a minimum score of 40.

Secondly, Marines must complete abdominal crunches or a plank.

Once again, the goal is to obtain a score of at least 40.

An even higher score is preferred.

Third, new recruits, as well as existing Marines, are challenged to complete a three-mile run in the designated time slots in order to earn the grade.

Once again there are maximum and minimum Marine Corps PFT standards for reference.

The only authorized uniform for the PFT is the green-on-green t-shirt and shorts. The Marine can wear athletic shoes of their choice.

Additionally, make sure you bring plenty of water and stretch between exercises in order to remain warmed-up and ready for the next activity.

What are the U.S. Marines CFT standards?

One is the aforementioned PFT standards which we went over in great detail for the purpose of this article.

The second series of activities are grouped in the Combat Fitness Test (CFT). CFT is divided into three categories of testing.

It includes an 880-yard run, ammo-can lifts, and maneuver under fire exercise.

The Combat Fitness Test is more demanding compared to the PFT and requires the use of military items also used in training and combat.

Like the PFT, the Marines recently updated CFT scores to make it more challenging to reach maximum points.

What is the Marines IST?

The Initial Strength Test (IST) is completed upon arrival at boot camp.

It is technically different from the PFT since the testing consists of pull-ups, crunches, and 1.5 mile timed run.

As you probably noticed the distance of the run is doubled once you progress to PFT standards.

How do Marine Corps PFT standards compare to similar tests with other branches of the military?

All branches of the U.S. Military have basic physical fitness standards based on gender and age.

However, Marine Corps PFT standards are considered more demanding compared to the Army and Navy.

For example, the timed run is double the distance of the Navy.

The Air Force PT standards have both a 1.5 mile and 2-mile run.

However, the Marines are unique in that they give new recruits and members tested annually the option of completing pull-ups or push-ups.

Marine Corps PFT standards are designed by the branch of the military to determine your physical fitness readiness.

The goal is to get a score of at least 40 points in each activity in order to remain in good standing with the Marines.

A rowing event and high altitude three-mile run are completed later on in basic training.

For now, the objective is to get satisfactory scores in pull-ups or push-ups, crunches, and regular three-mile long-distance run.

Check out the physical fitness testing requirements for the other military branches below: 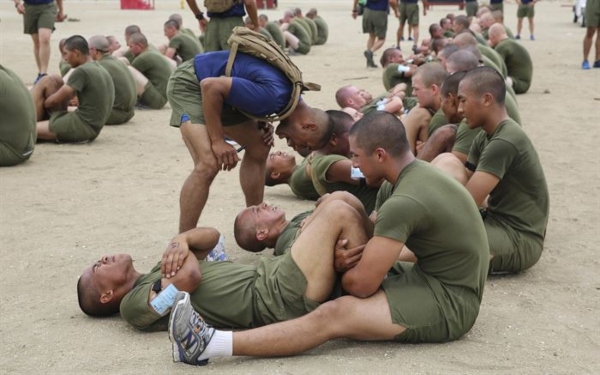 Learn more about the USMC PFT standards for both men and women. Also includes info on how the test is conducted, how it compares to other branches, and more.