Body art like tattoos are a way to represent yourself.

Unfortunately, certain organizations still frown upon tattoos and other types of body art.

Despite the military having strict standards for personal grooming it has actually relaxed many of its previous rules on tattoos.

The Navy has one of the most relaxed tattoo policies of any military branch yet there are still certain restrictions.

The main takeaways regarding the policies are:

Here’s a more detailed discussion on the policies.

What Tattoos Are Allowed In The Navy?

Tattoos in the United States actually have origins in the Navy.

Sailors were some of the first to start getting body ink after touring Southeast Asia where the tradition was already common.

As a result, the U.S. Navy has observed looser rules and standards when it comes to tattoos compared to other military branches.

The Navy recently changed some of its grooming standards in 2016, including far fewer rules regarding tattoos.

The policy has also been updated in 2020 to allow a single tattoo on the neck (as long as it’s less than one inch in diameter).

Additionally, tattoos below the knee and elbow are now allowed regardless of the quantity or size.

Therefore, sailors are no longer regulated by a number of tattoos on the arms or legs, meaning service members can have full sleeves.

This is good news for Navy SEALs, as they tend to have an affinity to full sleeve tattoos.

Hand tattoos, including ring tattoos, are also permitted under the new guidelines of the U.S. Navy.

What Tattoos Are NOT Allowed In The Navy?

The U.S. Navy, like the other branches of the military, operated for decades without changing tattoo policies.

However, as tattoos have become much more a social norm (40% of Millennials have at least one tattoo) the U.S. Armed Forces has begun to relax its standards.

Regardless, there are still certain standards you need to follow in order to qualify for the Navy.

While neck tattoos were once not permitted, the ink needs to remain small and under one inch in diameter.

Secondly, tattoos are still not allowed on the head, face, ears, or scalp.

Since body art is such a diverse subject with an endless list of images one can ink to their body, it is difficult for the U.S. military to create a list of everything the organization does not allow.

Consequently, the Navy grants permission to a commanding officer to determine what is acceptable and what is not allowed.

The U.S. Navy has zero tolerance when it comes to body ink that is considered “offensive, racist, sexist, extremist, or discredit America.”

Tattoos may also not discriminate against national origin or religion, even if the ink is covered under a uniform.

Any body art that suggests gang affiliation or the use of illegal substances is also not permitted.

Lastly, body mutilation is not allowed in any regard in the U.S. Navy.

It includes tongue forking, skin modification (including intentional scarring), intentional burns to create designs on the skin, or any type of dental ornamentation.

There are several questions that are asked frequently by people interested in joining the Navy:

Are hand, neck, or face tattoos allowed in the Navy?

Hand and neck tattoos are allowed in the Navy.

Neck tattoos were recently added to the acceptable list of Navy tattoos so long as they are below one inch in diameter.

Tattoos behind the ear are also permitted as long as the ink is not touching the ear directly.

There are some circumstances where a Navy recruiting commander may grant a waiver for having a neck tattoo that exceeds the maximum 1 inch x 1 inch dimensions.

However, face tattoos are still NOT permitted in the United States Navy.

The same is true of the head, scalp, and ears.

Are Navy officers allowed to have tattoos?

Therefore, Navy officers are allowed to have tattoos that extend below the elbow or knee, places on the body that were previously restricted prior to the updated policy.

Commanding officers also have discretion when it comes to allowing or prohibiting body art on other sailors that go against the Navy tattoo policy for 2021.

Will the Navy pay to remove tattoos?

Unfortunately, the answer is usually no.

In the past a soldier could get funding from the military branch he or she was serving in order to remove a tattoo that was not allowed for service.

However, in 2006 the Department of Defense released a new policy that requires active duty military personnel to pay for their own tattoo removals.

There was hope along with the new Navy tattoo policy that the decision would get reversed, however, the DOD policy still remains in place.

Sailors that are ordered to have a tattoo removed by a commanding officer can get financial support yet a command-directed tattoo removal in the Navy is rare.

The good news is that since the Navy is more loose with its tattoo policy the chances of needing to remove a tattoo in order to serve the country are far less.

Can you go to the Naval Academy if you have tattoos?

The Naval Academy is located in Annapolis and prepares some of the brightest young minds for officer positions in the military branch.

In the past, the restrictions against having tattoos in the Naval academy were fairly intense.

The academy has loosened some of its standards in support of the new Navy tattoo policy for 2021.

While it is still fairly frowned upon to join the Naval academy with a tattoo, there are exceptions.

The official academy policy on tattoos states body art is prohibited anywhere on the body that is “prejudicial to good order, discipline, and morale, or are of a nature to bring discredit on the Naval Service.”

Though you may get away with a few tattoos on the arms or legs, the academy does not allow any body art on the head, face, neck, or hands.

Related Article – US Naval Academy Summer Seminar: A Day In The Life Of A Camper

Can you get a waiver for tattoos in the Navy?

Yes, you can receive permission for a tattoo that is otherwise not allowed under the terms of the Navy tattoo policy.

Though waivers are not handed out liberally, you may receive a pass for a neck tattoo that is larger than one inch in diameter.

In order to qualify for a neck tattoo waiver, the ink may not touch the hairline or reach behind the ears.

Additionally, the Navy may grant a waiver for cosmetic tattoos that were performed by a licensed medical professional.

Sometimes cosmetic tattoos are performed in order to correct certain medical conditions and therefore the Navy may grant a waiver.

Military waivers are granted on a case-by-case basis with no guarantees.

What happens if you are caught with a prohibited tattoo after you’ve enlisted?

Sailors that are discovered to have tattoos with prohibited content may face disciplinary action.

The disciplinary action could include involuntary discharge in the most extreme situations.

The U.S. Navy presents commanding officers with the discretion to decide which tattoos are acceptable under its tattoo policy.

Unless it is an extreme case most sailors are given the option of removing or modifying the tattoo in order to conform to current rules and regulations.

What other grooming standards does the Navy have?

Body art is not the only grooming standards that the U.S. Navy regulates.

The U.S. Navy currently prohibits men from having body piercings yet women are allowed to wear one ball-studded earring per ear.

Navy hair standards require men and women to keep it “neat, clean, and well-groomed” with specific requirements regarding length.

Certain hairstyles are not allowed, and you can find a full listing of permitted and prohibited hair styles in the link below.

The Navy requires sailors to have a clean-shaven face with the exception of tightly regulated mustaches and sideburns.

Beards are not permitted in the U.S. Navy.

Get more details about Navy grooming standards by clicking here.

The Navy tattoo policy is adapting to a changing society where body art is becoming much more socially acceptable.

New standards allow small neck tattoos, as well as larger tattoos that extend below the elbow or knee.

The new policies for 2021 are a slight change from massive body art reform across various branches of the military that began in 2016.

We will do our best to keep the article updated with any new changes to the Navy tattoo policy. 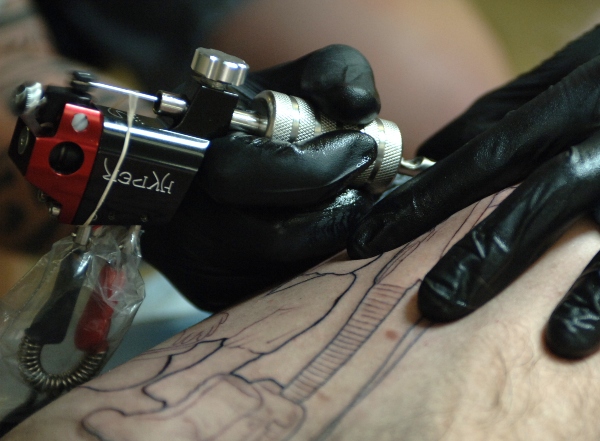 The Navy has a long history of being favorable and lenient towards sailors having a wide variety of tattoos. With that said, they do have some rules and regulations that you need to follow.