Tattoos are not discussed quite as frequently in the Air Force compared to the Navy, where its origins begin.

However, the Air Force tattoo policy for 2021 is actually fairly loose and arguably as liberal as the new Navy policy.

It is important that you have body art that remains in compliance with Air Force standards in order to avoid disciplinary action.

Learn more about what is and isn’t considered acceptable under the Air Force tattoo policy.

The key takeaways for the Air Force tattoo policy include:

Here’s a more detailed discussion on what is and what isn’t allowed.

What Tattoos Are Allowed In The Air Force?

Recent studies have concluded that more than 4 out of 10 adults have tattoos in the 21st century.

Tattoos are especially popular with Millennials which represent the recruiting pool for all military branches.

In accordance, the Air Force (along with other branches) have started to revise its policies based on tattoos.

The Air Force tattoo policy for 2021 follows the same groundwork that was outlined under sweeping reform in 2017:

As you can see there are several more options for airmen to have tattoos while serving the Air Force under the new restrictions.

The biggest change is the “Excessive” tattoo rule, or 25% rule.

It has helped pave the way for military personnel to have tattoo sleeves (half or full sleeves) without getting disqualified from duty.

Therefore, the Air Force tattoo policy is fairly loose with limitations no longer in place regarding tattoo size or placement.

In fact, the Air Force is the only military branch that also permits tattoos on the feet.

Airmen can sport tattoos below the ankle line, as well as one ring tattoo on a hand.

Accordingly, airmen with existing hand tattoos can also get grandfathered into the new standards after speaking with a commanding officer.

Therefore, practically every part of the body aside from the head and neck are fair game in the Air Force aside from a few stipulations.

What Tattoos Are NOT Allowed In The Air Force?

Along with creating a more liberal tattoo policy the Air Force also introduced defined locations that are not permitted in the military branch under the 2017 changes.

The Air Force does not allow tattoos on the face, head, scalp, neck, tongue, lips, or eyelids.

Hands are also limited to one ring tattoo on one of the two hands unless grandfathered through an existing policy.

Outside of the seven body parts that are a major no-no, the Air Force essentially allows tattoo placement elsewhere.

The second aspect of military tattoos that the Air Force assesses is the content of body art.

Inappropriate tattoos listed above are not authorized on any part of the body, even if the soldier can cover up the offensive content in uniform.

It is difficult for the Air Force to list every type of obscene or offensive tattoo.

If you are unsure if your tattoo constitutes a violation you should bring the subject up when speaking to a recruiter.

Waivers are sometimes granted to military personnel that would otherwise violate the USAF tattoo policy.

There are also options to get tattoo removal at reasonable costs.

There are several questions that we often get asked on Operation Military Kids about the Air Force tattoo policy.

Here are some of the most common…

How does the USAF define a tattoo?

The Air Force defines a tattoo as “a picture, design, or marking made on the skin or other areas of the body by staining it with an indelible dye”.

It can also include other methods of body altercation that are only detectable or visible under certain conditions (i.e. ultraviolet light).

Tattoos also include brands and body markings under USAF standards.

Brands are pictures, designs, or other markings burned into the skin or other areas of the body.

Meanwhile, “body markings” are pictures, designs, or other markings as a result of using means other than burning to permanently scar or mark the skin.

Can you have a full sleeve tattoo in the Air Force?

Yes, under the recent changes in 2017 the Air Force now allows tattoo sleeves.

It is possible to have a half or full sleeve tattoo on the arms or legs in the Air Force.

Previously, airmen were not allowed to have tattoos that covered 25% of their body which largely made tattoo sleeves unauthorized.

However, the new changes have granted more leeway for airmen to represent themselves on the arms or legs without violating the Air Force tattoo policy.

Can you have neck/face/hand tattoos in the Air Force?

No, tattoos on the face, neck, and hands are not permitted with the exception of a single ring tattoo on a hand.

Airmen are allowed to have one full-band ring tattoo on one of the two hands.

Otherwise, the hands are off limits along with the entire neck and face.

The face also extends to the rest of the head, including the scalp.

You can use the t-shirt test to determine if you have any tattoos that would violate the current Air Force tattoo policy.

Any tattoos that are visible over the t-shirt collar are violations of the Air Force tattoo policy for 2021.

Will the Air Force pay to remove tattoos?

The Department of Defense recently passed rules that stipulate the military will not cover expenses related to tattoo removal.

The only exception is if a commanding officer orders the removal, in which the soldier may potentially receive compensation if he or she is struggling to finance the operation.

Your best bet to get a tattoo removed the ‘right’ way is laser surgery from a qualified laser tattoo removal treatment facility.

With that said, we have reviewed alternative Laser Pen Kit Removal options in the past, with limited success.

Are Air Force officers allowed to have tattoos?

Yes, under the new Air Force tattoo policy officers are held within the same standards as enlisted personnel.

Therefore the same expectations toward what tattoos are and are not authorized for service members also apply to officers.

What are the disciplinary actions for having an unauthorized tattoo in the Air Force?

According to the Air Force tattoo policy, service members who have or receive unauthorized tattoos, brands, or body markings are required to initiate removal or alteration.

Airmen may have the opportunity to receive tattoo removal at a medical treatment facility or must do so on their own accord.

Airmen that refuse to remove or alter unauthorized body art in a timely manner are subject to a variety of appropriate quality force actions.

It includes but not limited to reprimand, UIF, control roster, referral EPRs/OPRs, military justice action, ineligibility for schools and assignments, or administrative discharge.

Can you get a waiver for tattoos in the Air Force?

It is possible to receive a waiver from the USAF regarding tattoos.

If you have questionable tattoos that may violate the placement or content of the USAF tattoo policy, a recruiting officer can exercise some discretion.

The same is true of commanding officers who have discretion when a soldier under their supervision receives a new tattoo while already in service.

However, don’t count on a waiver. Understanding and following the Air Force tattoo policy, especially for new recruits, is essential.

What other grooming standards does the Air Force have?

The Air Force has several grooming standards that military personnel are expected to observe.

Haircut lengths and styles are heavily regulated both for male and female personnel.

Additionally, mustaches and sideburns are permitted with several restrictions.

The Air Force expects military personnel to have mustaches which are “conservative, moderate, being within reasonable limits, not excessive or extreme, and will not extend downward beyond the lip line of the upper lip”.

Beards and other types of facial hair are not authorized in the USAF unless a medical waiver is obtained.

Females are allowed to have earrings (within acceptable standards) while males are not granted the same privilege.

Females are also allowed to have makeup and lipstick so long as it is applied conservatively and “in good taste”.

The Air Force tattoo policy is considered liberal by military standards, especially when stacked up against the Marine Corps.

It allows an unlimited number of tattoos on the chest, arms, and legs so long as the content is not considered offensive under the policy.

Meanwhile, the face, head, scalp, and neck remain places on the body where tattoos are still not authorized. 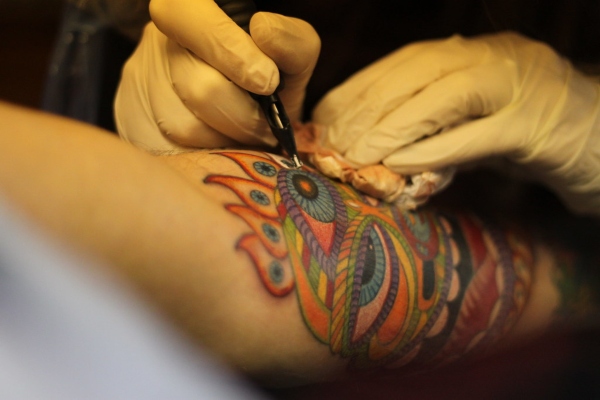 The Air Force has some pretty specific tattoo policies that can affect your potential of joining the branch. For example, neck tattoos are not allowed, but tattoos on your arms are allowed. With that said, they have to fit certain criteria.