The Navy SEALs are real-life elite superheroes who are often subject to Hollywood interpretation in Navy SEAL movies.

In some cases, the best Navy SEAL movies of all time are complete works of fiction.

However, in some cases the movies reflect events that actually happened.

Get the popcorn ready because we put together a collection of ten Navy SEAL movies to stream today.

In the 1990s movie Navy SEALs, Lieutenant Curran and the SEAL team set out to rescue an aircrew.

In doing so, the team discovers the enemy has American weapons and plans to use them against Americans.

Furthermore, the Navy SEALs movie later became the platform for a video game with the same name.

James Cameron is responsible for writing and directing the movie The Abyss.

In this movie, those aboard a submarine need rescuing.

A Navy SEAL team sets out to rescue them. At the same time, a hurricane is brewing. Also, the Soviets are on their way to get to the submarine first.

While all this is going on, some strange things are happening below the water’s surface.

The Abyss is a suspenseful movie with some brutal scenes and edge-of-your-seat action.

The movie Zero Dark Thirty is a thriller that illustrates the search for Osama Bin Laden, who heads Al-Qaeda.

The events in the movie start after the attacks on America on September 11th.

In the movie, a CIA analyst and the CIA director follow the intel to a compound where they believe Osama Bin Laden stays.

Then, a Navy SEALs team moves in to capture the target.

There is a ton of action in this movie, so get ready.

Bruce Willis stars in Tears of The Sun, and he is a member of the Navy SEAL team responsible for rescuing a doctor in the jungles of Africa.

The rescue is necessary because of a civil war in Nigeria and a recent coup.

However, upon reaching the doctor, the team is sent to rescue, the doctor refuses to leave her patients.

The SEAL team knows the easiest option is to force the doctor to evacuate with them.

However, the SEAL team sees precisely the kind of destruction the rebels can inflict on innocent people, and the SEALs realize they must do something to stop it.

Act of Valor came out in 2012, and the director includes authentic Navy SEALs and the U.S Navy Special Warfare Combatant Crewmen in the movie to add to the authenticity.

In this movie, terrorists send an ice cream truck laden with explosives to kill the ambassador to the Philippines and his kid.

While doing so, they kill several kids at an elementary school.

At about the same time, two CIA operatives are gathering intel, and the rebels kill one and capture the other.

A Navy SEAL team goes into rescue the operative, and they realize they need to work to stop the terrorists who kidnapped the CIA operative from attacking Americans.

The movie Act of Valor found inspiration from actual events.

After a submarine vanishes, another sub commanded by Gerard Butler’s character, Commander Glass, goes to figure out what happened.

Commander Glass has a reputation for doing things his way.

While Glass is off trying to figure out what happened to the missing submarine, a Navy SEAL team keeps an eye on a Russian submarine they think has something to do with the missing American sub.

The movie involves a coup, and the Russian president needs help from the SEAL team and Commander Glass to avoid a war.

The movie Lone Survivor centers around a Navy SEAL team sent to take out a leader for the Taliban.

Mark Wahlberg stars as one of the four members of the team that deploys to get surveillance and kill the Taliban leader, if possible.

However, the team finds themselves in Afghanistan very much outnumbered by the enemy during an ambush.

There is a lot of action in this movie, so it is not for anyone struggling with violence and gore.

You can tell the outcome by the Navy SEAL movie’s title, but the camaraderie evident in this movie is impressive.

Also, Lone Survivor reflects actual events, and there is an epilogue that reveals details of the actual events inspiring this movie.

Tom Clancy is responsible for the book Without Remorse, which became an action-packed option for Navy SEAL movies in 2021.

Michael B. Jordan and Jamie Bell star in Without Remorse, which centers around a Navy SEAL team targeted by Russians for their role in rescuing a CIA operative.

Senior Chief John Kelly’s wife, who is pregnant, becomes a victim of the retaliation while Kelly has life-threatening wounds.

Upon recovering, Kelly realizes the CIA will not investigate what happened, so he takes matters into his own hands to avenge the death of his wife and baby.

Kelly’s actions land him in jail, but he has information that gives him the opportunity to get out to finish his vendetta.

Renegades released in 2017, and the film follows a Navy SEALs team as they head to recover a bank vault at the bottom of a lake in Bosnia.

The SEAL team in this movie just got in trouble for their role in wreaking damage and havoc failed mission involving a Serb general.

Their three-day suspension leads to an adventure.

Decades before, Germans has this gold, and they put it in a Bosnian bank vault. The Germans arrest everyone in the town, but a kid escapes the Germans.

Then, the Germans flood the town with water.

This little boy grows up with this secret about the gold and is the grandpa of one of the Navy Seals’ girlfriends.

The SEALs decide to retrieve the gold using their skills in equipment from on base.

Things do not always go as planned, so expect some intense drama.

SEAL Team Six is a television movie that depicts the events at the Abbottabad compound during the Navy SEAL raid resulting in Osama Bin Laden’s death.

While United States officials could not confirm if the depictions of the events were accurate, the movie illustrates SEAL team six training for the mission to capture Osama Bin Laden.

The Pentagon orders the attack on the compound based on gathered intelligence despite the fact the location of the compound was in Pakistan.

This daring mission occurs at night and results in the death of Osama Bin Laden. 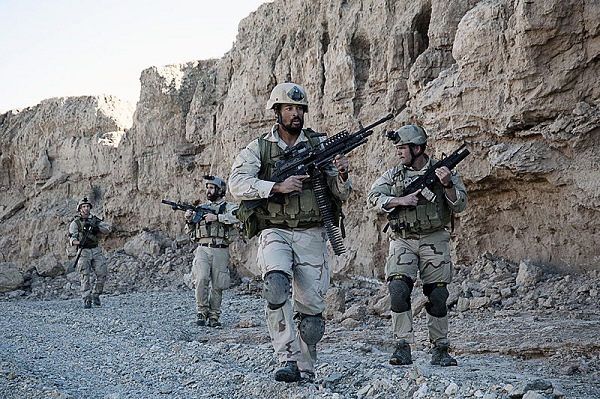 If you'e looking for the best movies about Navy SEALs, you've come to the right place. Check out our list of the 10 best Navy SEAL movies of all time.