The US Navy is one of the largest branches in the US Military.  With over 320,000 active duty personnel, the Navy has a long tradition of defending our nations waters, and force projection throughout the world.

Like every other military branch, they have a very structured ranking system that clearly designates who’s in charge of whom.

Whether you’re a Navy SEAL, a pilot, or a cook, the ranking structure is the same no matter what job you have in the Navy.

Below is a table outlining the Navy Ranks and Basic Pay for 2021 for both officers and enlisted.

Jump To A Rank

Keep in mind that the above pay is based on the lowest number of years in the Navy while achieving a specific rank.

The longer you serve, the higher your pay will be.

Check out the charts below to see how it all plays out on a yearly basis:

The above pay rates do not include the wide variety of bonuses and benefits that are included in Navy service.

Additional incentives, pay, and bonuses may also include:

To name just a few.  Check with your local Navy recruiter to learn more.

Related Article: How To Land The Highest Paying Jobs In The Military

Here’s a chart showing the ranking structure for officers in the Navy:

Just like with the enlisted ranks, the above pay numbers are the absolute minimum.

The longer you serve, the higher the pay will be.

Check out the charts below to see how it all plays out:

Which branch of the military pays the most?

All military branches pay the same. Pay is dictated by your rank and length of time in service, and goes up as time goes on.

What is the first year pay for an enlisted sailor?

Does the Navy pay for housing?

Like other branches of the military, the US Navy entitles sailors to a Basic Allowance for Housing (or BAH). Its purpose is to provide an allowance for housing, and is determined by several factors. 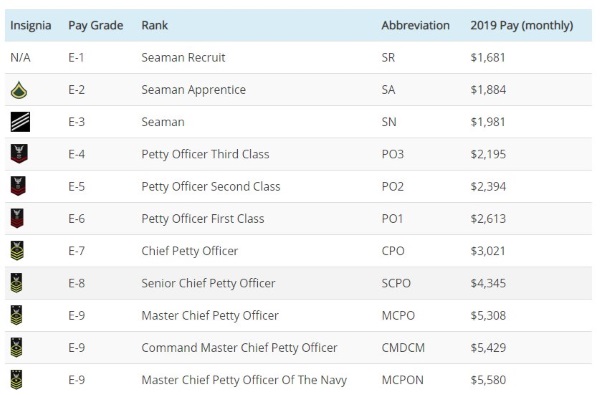 Learn more about the ranks and pay for the US Navy for 2021 here. Includes the pay rates for both enlisted, as well as officers.