The Marine Corps is considered the most demanding and challenging branch in the military.

As a result, many of its expectations are set at a higher level compared to the Army, Navy, and Air Force.

Recently, the Marine Corps has loosened and simplified its restrictions on their tattoo policy.

Here are the key takeaways for the Marine Corps tattoo policy:

See a more detailed discussion on the policies below.

What Tattoos Are Allowed In The Marine Corps?

According to Marine Corps General Robert B. Neller, the tattoo policy over the years has:

“Attempted to balance the individual desires of Marines with the need to maintain the disciplined appearance expected of our profession.”

Marines are now even allowed to have sleeve tattoos as long as the sleeve doesn’t extend past the wrist.

Marines have the opportunity to receive waivers for cosmetic tattoos that cover up scars and other body disfigurements.

A waiver is granted by a commanding officer and offered on a case-by-case basis.

When it comes to any area of the body that is NOT concealed by a PT uniform, the Marine must follow slightly more demanding guidelines.

There are stipulations regarding visible tattoos:

Additionally, married Marines are permitted to have one single band tattoo (no more than 3/8 inch) on one finger.

Any other body art on the hands is strictly prohibited.

What Tattoos Are NOT Allowed In The Marine Corps?

The Marine Corps tattoo policy breaks down what is not allowed on a Marine in two different ways, just like other military branches.

Recent amendments have created a fairly liberal tattoo policy with the intention to remove barriers for potential recruits.

As previously mentioned, there are places like above the collar bone and below the wrist that are still restricted (aside from one band tattoo).

The Marine Corps has aligned with the other services and now allows sleeve tattoos. 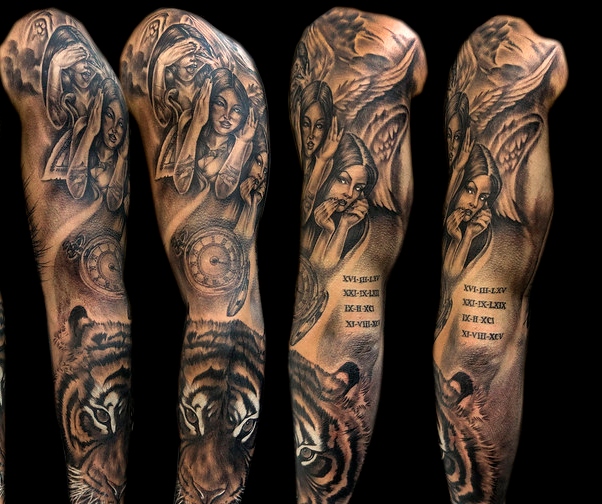 The Marine Corps defines tattoo sleeves as “the full coverage of the skin by tattoo ink” which is generally located on the arms or legs.

Here is a quick breakdown of the places on your body the Marine Corps does not allow tattoos:

The current Marine Corps Tattoo Policy can be found in the MCBUL 1020.

In addition to the location on your body, the Marine Corps will also extensively study the content of the body art.

The Marine Corps has a zero-tolerance policy when it comes to offensive tattoos comparable to the Army, Navy, Air Force, and Coast Guard.

The Marine Corps tattoo policy for 2022 states that ink is never allowed which is “prejudicial to good order and discipline.”

Furthermore, tattoos that are “drug-related, gang-related, extremist, obscene or indecent, sexist, or racist” are not authorized under any circumstances.

In order to remain compliant with the Marine Corps tattoo policy, use common sense.

Ask yourself, ‘Would your mother approve of this type of tattoo?”

If the answer is no, the Marine Corps isn’t going to like obscene or indecent tattoos any more than other professional organizations.

Recruits that are interested in joining the U.S. Marines and already have tattoos can speak with a recruiting officer to determine if any of the body art is in violation.

There are waivers granted in certain situations, especially for former Marines wishing to join the Reserves, yet the military branch generally bends its rules more for tattoo placement than content.

We get a lot of commonly asked questions regarding the Marine Corps tattoo policy.

Can you have a full sleeve tattoo in the Marine Corps?

In order to remain in compliance, the sleeve must stop before the wrist.

Can you have neck/face/hand tattoos in the Marine Corps?

No, the Marine Corps tattoo policy makes it clear the locations are not authorized.

The Marine Corps has a similar policy for face, neck, and hand tattoos as other military branches.

The only exception is on the hand where a wedded Marine is authorized one band tattoo on one of the two hands.

Will the Marine Corps pay to remove tattoos?

If you are ordered to remove a tattoo that the Marine Corps determines is non-compliant you may seek funding through a military clinic for professional removal.

Are Marine Corps officers allowed to have tattoos?

Yes, under the new Marine Corps tattoo policy officers are permitted the same rights for body art as enlisted members.

Commanders are also given permission to make individual determinations for tattoos that are sported by other personnel under their supervision.

Can you get a waiver for tattoos in the Marine Corps?

It is possible to request a waiver for a tattoo that is located on a body part that is otherwise not authorized in the military branch.

The recruiting officer is given permission to assess each situation on a case-by-case basis.

Former Marines that have “out of regulation tattoos” and wish to join the reserves are often granted a waiver, as one example.

The Marine Corps rarely grants waivers to Marines with obscene or indecent tattoos as the content of the body art is judged more harshly.

What other grooming standards does the Marine Corps have?

The Marine Corps has strict grooming standards compared to its brother branch, the U.S. Navy.

Haircuts are required to remain “neat, clean, and well-groomed” at all times.

There are a number of regulations related to what hairstyles are authorized and not authorized.

Male Marines are permitted a mustache after completing recruit training.

The Marine Corps tattoo policy for 2022 is designed to maintain a professional and disciplined organization.

As a result, standards are set in place that determine what types of tattoos and where on the body they are authorized.

Speaking with a Marine Corps recruiter can help clarify if your current body art is compliant or not.

Marine officers are given permission to make the determination for Marines that are already enlisted in the military branch. 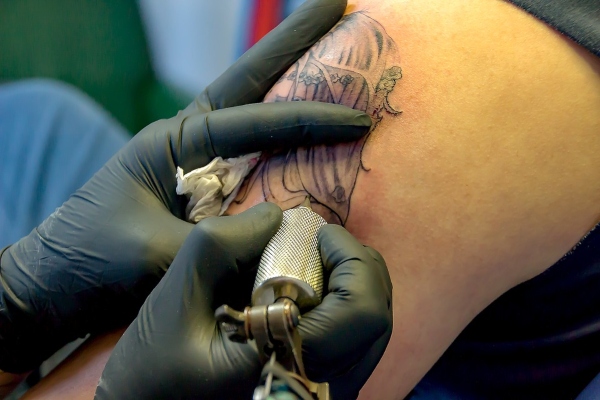 Just like with the Coast Guard, the Marine Corps has a very stringent tattoo policy that is strictly enforced.