Less than 1% of Americans will sign on the dotted line and join the brotherhood of the U.S. Marine Corps.

Those that do will tell you that there are some amazing pros and unfortunate cons that will become evident during an enlistment.

Whether you are a 17 year old “poolee” that has grandiose ideas of war, a salty devil dog with years of war fighting under your belt, or are a young Marine killing time on duty, the following is a list of 13 pros and cons of joining the United States Marine Corps that is relatable to every Marine.

7 Pros Of Joining The Marine Corps

You are considered elite and are the only servicemember who can claim membership for life.

The enemy fears U.S. Marines and there are even rumors of enemy fighters being ordered not to attack convoys if they see the coveted eagle, globe, and anchor emblem on the sides of the vehicles

According to the Marine Corps Times, there are 5 soldiers for every 1 Marine.

It’s no wonder why the official recruiting slogan for the US Marines is “the few, the proud, the Marines”.

Every branch of the military has some form of dress uniform.

These uniforms are placed into different classes which rates the times at which they are allowed to be worn.

The U.S. Marines have dress blue alphas which are unparalleled in the realm of military uniforms.

The dress blues are primarily reserved for elite functions/ceremonies, but when they are finally brought out for an occasion, people take notice.

Are you taking a girl to the birthday ball with you?

Be prepared for a large amount of admiration from your date as she lays her eyes upon your dress blues.

Of course, Marines have several other commonly recognized uniforms such as the “chucks” or charlies.

These are the uniforms that Marines are allowed to wear in everyday public situations, and are commonly seen in movies as the uniform that Marines would wear when on leave from service in WWII, Korea, or Vietnam.

Charlies are widely disliked among members of the Marine Corps, but they still look sharp either way, and are the uniform of choice when Marines are serving as representatives for the U.S. Marine Corps. 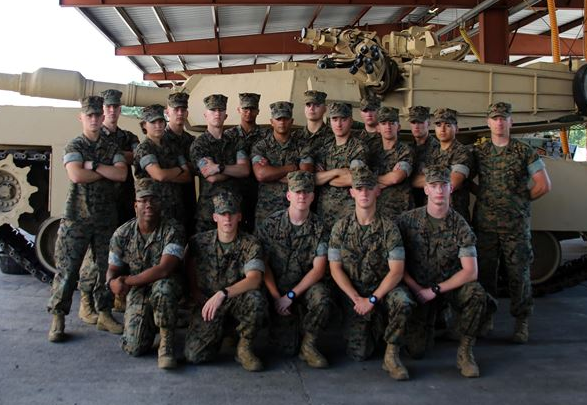 This is far and wide, the biggest pro of serving in the U.S. Marine Corps.

The brotherhood and friendships are unlike anything else in life.

The bonds that are formed with fellow Marines will remain with you long after your time in the service is completed.

Additionally, it is not uncommon for older Marines from Vietnam, Korea, or WWII to comment and immediately recognize the fact that you both earned the title of U.S. Marine, regardless of the war that is was earned during.

This is far and wide, the biggest pro of serving in the U.S. Marine Corps.

The brotherhood and friendships are unlike anything else in life.

The bonds that are formed with fellow Marines will remain with you long after your time in the service is completed.

Additionally, it is not uncommon for older Marines from Vietnam, Korea, or WWII to comment and immediately recognize the fact that you both earned the title of U.S. Marine, regardless of the war that is was earned during.

Marines undergo physical training at least 3 times a week for most platoons and units around the Corps.

This means that you will likely be in the best shape of your life.

One benefit of being in fantastic shape, apart from feeling good and being able to run 3 miles even after staying out on the town for a full night, is the attention from others.

Yes, the opposite sex will notice your fitness level and appreciate the fact that you are clean shaven, squared away, and are doing something bigger than yourself.

While your pay in the Marine Corps is dictated by how long you served and your rank (like every other branch of the military), there’s one thing you’ll never have to worry about: Uncle Sam bouncing his check.

With an annual budget of $700 Billion per year, the US Military is the most well-funded military in the world.

Just starting out in the Marines, you can expect to take home about $1,600 per month.

That might not sound like a lot, but when you consider the additional benefits like free food, free (or heavily subsidized) housing, medical, dental, and vision coverage, the take home pay isn’t too bad.

Here’s a snapshot of Marine pay for the first 1 – 10 years of service:

When you join the Marine Corps, one thing is for sure: you won’t be living in a tent out on the street.

Sure, you might be in a tent in the middle of Afghanistan for several months.

But that only lasts as long as your deployment does.

Once you’re back in garrison, you can expect to be housed in a location with running water, heat/air conditioning, and electrical.

As your career progresses through the Corps, you will be given opportunities to move into other housing accommodations that are more fitting for whatever rank you are.

The Marines offer government quarters that some claim rival any modern condominium or apartment.

With that said, the best part about it is it’s highly subsidized.

The Marines offer all sorts of housing allowances, including the basic allowance for housing (BAH), Move-In Housing Allowance (MIHA), and Advance Basic Allowance For Housing.

6 Cons Of Joining The Marine Corps

Marines have one of the hardest and longest boot camps of any of the military branches.

To even step foot through the door, you need to meet the basic physical fitness test (PFT) standards.

You’ve probably seen movies like Jarhead or Full Metal Jacket and wondered if Marine drill instructors are really that scary.

At Marine boot camp, you can expect to be screamed at, sleep deprived, food deprived, and living one meal at a time in order to successfully complete the training.

It’s all, of course, done for a purpose.

They shape you and your brothers around you to be a part of the most lethal fighting force our nation has to offer.

Marines stand duty, lots of it. A list is generated monthly and distributed to platoons to ensure that all duty posts are manned at all hours, day and night.

You can expect to stand some duty post once every few months, or every few days if you are around during a large leave block when most other Marines took vacation time.

What do you do while on duty?

You update a logbook with regular and irregular activities, read entertaining logbook posts from past duties, and maintain order and regulations within the establishment that you are responsible for.

Duty posts may be 24 hours long or around 12 to 14 hours if you stand a post that starts in the evening and stretches to the morning.

Either way, be ready for long periods of trying to find ways to entertain yourself and your fellow Marine on duty.

When there’s a war, you’ll be the first one in. (right behind special forces like DEVGRU and Delta Force, of course)

Being a Marine can be very dangerous, especially during wartime.

Even though they are way smaller in size than the Army and Navy, the Marines suffer a disproportionately higher rate of combat casualties and deaths. (Source: fas.org)

This of course can be attributed to the fact that Marines essentially “pave the way” for other larger forces that move in after the major fighting has been done.

A lot of guys join up with the Marines for that reason, not realizing that war isn’t exactly what they thought it would be.

#4. Con: Family Life Can Be Brutal

Being an U.S. Marine means being deployed to various locations around the world for different periods of time.

Even in peacetime, Marines may be tasked with performing humanitarian work to remote locations where you can’t bring your family along with you.

Having a wife and kids at home is easy for some, and not so easy for others.

Related Article: 10 Benefits Of Being A Military Wife (and 5 Not-so god things)

It takes a very strong spouse to deal with the fact that you won’t be there for your kids’ first steps, first words, or first anything.

The armed forces have made tremendous strides in developing internet access for their soldiers, Marines, sailors, and airmen.

However, given the various missions of the Marine Corps, there’s a good chance that you won’t be anywhere near an internet connection.

#5. Con:  Feeling of Wander/Disconnect After Service

While serving as a U.S. Marine, daily life is understood and laid out for everyone. Wake up at a specific time, workout, eat, work, have liberty, and then sleep.

There is no longer a sense of belonging or understanding of where one should be at any given time of day.

It is easy to feel a disconnect and sense of wandering while attempting to find a path in life outside of the Marine Corps.

Many Marines struggle with finding a sense of belonging that is as strong and embracing as the bond that they felt with their fellow Marines while serving on active duty.

It is something that every Marine is faced with and is a very major dilemma facing anyone who is leaving the structured lifestyle of the Marines.

#6. Con: Things Can Get REALLY Boring

You’ve seen those Marines commercials that are always showing all the cool stuff, right?

You know what kind of stuff I’m talking about…

Marines running in to a helicopter or V-2 osprey, then taking off from an aircraft carrier.

Or driving up a beach in an Amphibious assault vehicle, running on to the beach with guns blazing.

Or even driving through some remote desert in an Abrams tank, shooting at bad guys.

If none of this sounds familiar, check out the video below:

This is what a typical day in the Marine Corps looks like, right?

Well, yes and no…

Sure, there will be times when you’re doing the cool stuff.

However, things can get really boring.

What they don’t show in those commercials is the long hours spent cleaning the bathrooms, picking up trash outside the barracks, or standing guard for 5 hours straight in a sideways driven rain.

If you think all of your time in the Marines will be spent rappelling from helicopters, skydiving from C-130’s, or looking through a sniper score right before your about to take out a Taliban leader, think again.

How To Join The US Marine Corps

Jobs In The Marines 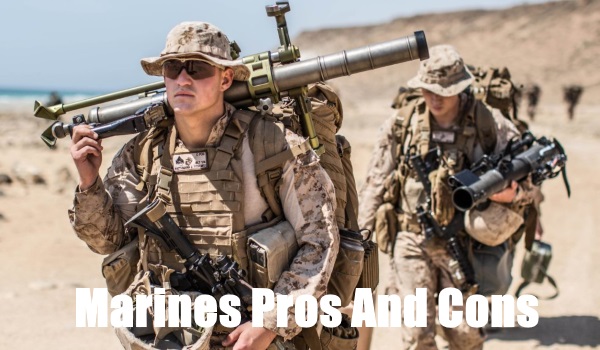 Learn more about the pros and cons of joining the Marine Corps, as well as how you can make this branch of the military work for you.

13 Replies to “13 Pros And Cons Of Joining The Marines”