Soldiers have always been held to higher grooming standards and expectations compared to civilians.

However, in recent memory, the U.S. Armed Forces have made its tattoo policies more lenient in order to adjust to a changing society.

The Army tattoo policy for 2021 is fairly loose, among the most liberal tattoo policies in the military along with the Navy.

Learn more about what is acceptable, and what body art is still prohibited before you join the U.S. Army.

The main takeaways regarding the Army Tattoo Policy are:

Let’s take an in-depth look at the policy in detail below.

What Tattoos Are Allowed In The Army?

The U.S. Army prides itself on a clean and neat presentation.

However, the military branch has adapted to modern social norms where nearly half of all Millenials have at least one tattoo.

The Army revised its tattoo policy during the conflicts in Afghanistan and Iraq in order to open up a larger recruiting pool.

Tattoos and brands are defined by the U.S. Army as “permanent markings that are difficult to reverse in terms of financial cost, discomfort, and effectiveness of removal techniques”.

The Army tattoo policy no longer limits the number of tattoos on a soldier.

Additionally, the size of tattoos is also not scrutinized near as much as previous generations.

As a result, members of the Army are allowed to have as many tattoos as they want on their chest, arms, torso, and legs.

It is an adaptation of a previous Army tattoo policy that limited the number of tattoos to four below the elbow and knee.

However, the skin below the wrist and from the neck up is still off-limits.

The only exception to the hand is a ring tattoo, with one being permitted per hand.

The Army tattoo policy is a constant revolving door.

Therefore, soldiers with tattoos that were previously compliant to military policies yet have since been deemed inappropriate can get “grandfathered in”.

Regardless, it is impossible to have a tattoo on the face or head grandfathered because these locations on the body were never authorized in the military.

Army soldiers are inspected routinely for new body art as well as other regulations of its grooming standards.

Attempting to hide or cover up tattoos in violation of the policy is a bad idea and will inevitably end up with disciplinary action.

Before obtaining a tattoo it is recommended that soldiers (or individuals interested in serving the military), speak to a unit leader/recruiting coordinator to ensure the ink falls within acceptable standards.

Related Article: Can You Join The Military With A Felony?

What Tattoos Are NOT Allowed In The Army?

There are two things to consider when gauging if a tattoo is allowed/appropriate in the U.S. Army:

B) Message of the tattoo

As far as placement we recommend using the t-shirt test.

Put on a t-shirt and stand in front of a mirror.

The Army does not allow any visible tattoos that show above the t-shirt collar line.

The same rule applies to the neck, face, ears, and scalp (as well as the inner mouth or eyelids).

Hand tattoos are prohibited in the Army aside from the allowance of one ring tattoo per hand.

Otherwise, you will want to avoid placing tattoos on or below the wrist.

Secondly, the Army will analyze the appearance of the tattoo and its message.

The U.S. Army prohibits any tattoos that are racist, derogatory, sexist, extremist, or indecent.

These types of tattoos are not allowed regardless of where you place them on the body (even if hidden under a uniform).

The Army grants commanding officers the responsibility to determine what types of tattoos are appropriate and which ones may be deemed offensive.

Here are the main types of tattoos the U.S. Army analyzes and may prohibit you from enlisting in the military:

Lastly, branding tattoos are not authorized in the U.S. Army.

Military personnel are prohibited from having tattoos, including brands on the head, face, and neck.

There are several commonly asked questions regarding the Army tattoo policy:

Can you have a full sleeve tattoo in the Army?

The U.S. Army recently changed its policy regarding tattoos on the arms.

Tattoos are also not allowed on or below the wrist (aside from a single ring tattoo).

However, there is no longer a limitation to how many tattoos Army soldiers can have on the arms so long as they follow other stipulations.

Can you have neck/face/hand tattoos in the Army?

No, the Army does not allow tattoos on the face, neck, or hands.

The only exception is a small ring tattoo that can exist on each hand (limit one per hand).

Face and neck tattoos are highly discouraged in the U.S. Army.

There are a few waivers that are granted each year by Army recruiters if the officer determines the tattoo is not too distracting.

Will the Army pay to remove tattoos?

The Army will not pay to remove existing tattoos prior to joining the military branch.

The only way you could get compensation for tattoo removal from the U.S. government is if the Army tattoo policy changed after you enlisted.

For example, if a commanding officer determined your tattoo violates its policy, you could request funding for the removal.

However, those circumstances happen infrequently in the U.S. Army.

Are Army officers allowed to have tattoos?

Yes, officers of the Army can still have tattoos.

The Army tattoo policy for 2021 is different from previous regulations that held commanding officers to higher physical appearance standards compared to enlisted soldiers.

The new policy basically holds officers to the same rules as enlisted soldiers when it comes to tattoos.

Commanding officers are also responsible for determining if a soldier under their watch gets a new tattoo that is deemed offensive.

Can a soldier cover up a tattoo with makeup or bandages?

The Army does not allow soldiers to cover up a tattoo anywhere on the body with bandages or makeup.

It doesn’t matter if the tattoo is hidden when in uniform or not.

However, “permanent makeup” is an exception.

The Army approves permanent makeup like tattoos that represent eyebrows or eyeliner as long as it follows the traditional rules for makeup (only on female soldiers).

What happens if a soldier is caught with an unauthorized tattoo/refuses to remove?

According to the Wear and Appearance of Army Uniforms and Insignia Manual 670-1, there are procedures for handling unauthorized tattoos.

If a soldier has any tattoo or brand that is prohibited under the Army tattoo policy (or is not grandfathered in), he or she will receive a written notice from a commander regarding the violation.

Once the soldier receives the notice he or she has 15 days to make a decision.

The Army traditionally provides three options: A) appeal the decision of the commander, B) have the tattoo professionally removed, or C) keep the tattoo.

Tattoo policy appeals are handled by a commander at the O-6 level for a final determination.

Military personnel that violates the Army tattoo policy are responsible for any costs related to the removal of the tattoo.

Soldiers that elect to keep tattoo(s) in violation of the policy will begin administrative separation proceedings in order to terminate his or her service.

What other grooming standards does the Army have?

The U.S. Army – like every branch of the military – has fairly strict grooming standards.

Men and women service members are both required to follow stern haircut requirements.

Additionally, men are not permitted to have beards in the Army though tightly regulated mustaches are authorized.

Body piercings are not allowed for male service members, while females can sport piercing with several restrictions.

Learn what all is authorized and not authorized regarding Army grooming standards.

The Army tattoo policy for 2021 is adapting to body ink becoming much more a part of general society.

The tattoo policy no longer limits the amount or size of tattoos on the body so long as they are not present on the head, face, ears, neck, elbows, or hands.

If you have more questions about the Army tattoo policy, including body art that you are not sure will be authorized, contact a local recruiter. 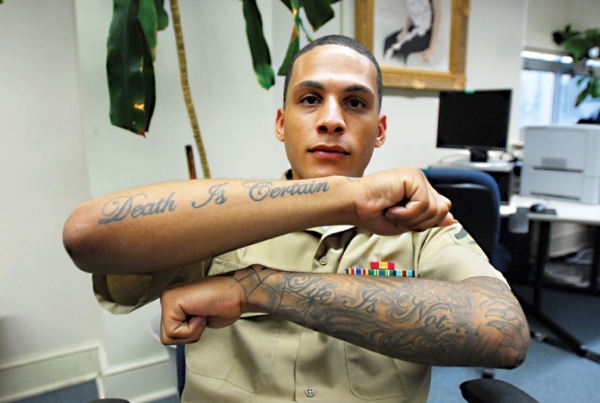 If you're considering joining the US Army, then you need to take their tattoo policy into account.