Movies involving snipers usually draw a crowd. In some cases, the sniper movies depict the sniper as a hero, but that is not always the case.

Also, sniper movies are often based on actual events and wars. Furthermore, in many cases, the films illustrate the internal thoughts and struggles of the snipers.

In any case, these sniper movies are full of edge of your seat non-stop action.

Grab the popcorn and get ready to add some sniper movies to your watch list.

Jack Reacher is a nomadic retired-Army criminal investigator who travels the country.

The inciting incident of this movie is a sniper shooting five civilians for no immediately apparent reason.

A suspect, Barr, is quickly found, but he writes down for the police to “get Jack Reacher.”

Given his lifestyle, Reacher is challenging to track down because he has no interest in being found.

However, there is an entire backstory to Reacher’s involvement with the suspect.

Previously, Reacher investigated Barr due to a shooting, except the Army opted not to persecute Barr.

Reacher made it very clear if he ever heard of Barr again, he would kill Barr himself.

While in Florida, Reacher sees Barr’s photo on the news and immediately heads to Pittsburg.

While the defense attorney is trying to sort out how to find a retired and nomadic Army investigator who does not want to be found, Jack Reacher shows up.

Reacher is committed to sorting out if Barr is responsible for the shooting, although he believes Barr is guilty at first.

As the movie progresses, we see Reacher come to different conclusions, and viewers learn why Barr asked for him.

The main character in Jarhead is Anthony Swofford (Swoff), who Jake Gyllenhaal plays.

The premise of the entire movie is a psychological profile of a soldier’s mindset during the Gulf War.

Also, this story’s narration is through the voice of the main character, a Marine sniper.

Swoff joins the Marines, and his initial experience in boot camp is full of stalling and the antics of a mostly crazy drill instructor.

Swoff makes it through boot camp and hopes to make it through the sniper course, as well.

As the story progresses, viewers see these soldiers’ doubts and internal and external struggles during basic training and combat.

Mark Wahlberg plays Bob Lee Swagger in the movie Shooter. Swagger is a skilled Marine sniper, and he vanishes after the mission goes sideways.

The United States government finds Swagger, and he realizes the government’s mission is a massive setup.

Now, Swagger finds himself the target of a manhunt because he is set up as having a plan to assassinate the President of the United States.

Instead of running, Swagger uses his training and skills to seek revenge on those who did him wrong.

The movie Jackal is a thriller movie with Richard Gere as the main character.

Gere’s character (Mulqueen) is an Irish Republican Army (IRA) sniper, and the FBI wants him to assassinate The Jackal, a professional assassin.

The Jackal (Bruce Willis), who works for the Russian mafia, is set to assassinate a politician.

Also, Willis’s character is a master at disguises, and Gere is the only one who can find him.

As the plot rolls forward, you realize Mulqueen has an ulterior motive to find The Jackal. We learn that The Jackal is responsible for wounding the mother of Mulqueen’s child, which causes a miscarriage.

As the plot moves forward, you realize plot twists and see The Jackal take on different personalities in order to meet his objective.

The movie American Sniper released in 2014. The film receives its inspiration from Chris Kyle’s memoir titled American Sniper: The Autobiography of the Most Lethal Sniper in U.S. Military History.

Kyle is a deadly sniper with over 255 kills between his tours during the Iraq War.

However, despite his success, his time in combat had a profound impact on his personal life.

His first tour to Iraq post 9-11 earns him the title of ‘Legend,’ except the experience was traumatizing.

Whenever Kyle returns home, he feels more and more distant from his wife and newborn son as the memories of his time in combat occupy his mind.

Eventually, Kyle gets help from the VA, and he adjusts to civilian life. However, the movie reveals what happens to Kyle on February 2, 2013.

5. Enemy at the Gates

The movie Enemy at the Gates came out in 2001, reflecting the nonfiction book of the same name.

The events in the movie reflect the Battle of Stalingrad from 1942 to 1943.

Despite basing the movie on a true story, the main character is only loosely based on a sniper named Vasily Zaitsev.

Jude Law plays Zaitsev, and he is a soldier with the Red Army. Zaitsev is obviously handy with a rifle, and his accomplishments earn him legendary status in the Army.

The Germans are not a fan of Zaitsev, and there is a plan in place to kill him that does not go according to plan.

This sniper movie is full of double-crosses, love triangles, and high-action war scenes.

While the movie Wanted is not a typical military-inspired sniper movie, it is worthy of the sniper list due to the action and all the assassins.

One night, Wesley meets a woman who tells him his dad was an assassin, and the person responsible for his death is now hunting Wesley.

Now, it is difficult for Wesley to believe, but he wakes up the following day with a ton of money in his bank account, which gives him the confidence to quit his job dramatically.

Then, he finds himself in training with a secret fraternity of assassins.

However, despite learning a tremendous number of assassin skills, including sniper skills, there is much more going on in the fraternity than Wesley expected.

The movie Sniper came out in 1993 and stars Billy Zane and Tom Berenger.

In Sniper, Master Gunnery Sergeant Beckett (Tome Berenger) is a sniper tasked with assassinating a rebel leader in Panama.

After Beckett’s spotter dies during the mission, Miller (Billy Zane), a civilian, becomes his partner.

The two of them must assassinate another rebel leader.

Despite being a sharpshooter, Miller has no combat skills, and the two struggle with Miller’s inexperience and problems with trust.

However, the movie has a dramatic ending with each character saving one another.

The Wall is a 2017 war movie that depicts two soldiers who find themselves trapped in one spot by an Iraqi sniper.

One soldier, Staff Sergeant Matthews (John Cena), is a sniper sent to look into a construction site in Iraq. Also, his spotter, Sergeant Isaac (Aaron Taylor-Johnson), is with him.

While investigating the situation, Matthews is shot by the sniper, and while Matthew thinks he is talking to headquarters for help, he is actually talking to the sniper who shot him.

With a lot of action and back-and-forth, the movie ends with a cruel and unexpected twist.

The movie Battle for Sevastopol is a biographical story about a female soviet sniper known as one of the deadliest snipers during World War II with 309 confirmed kills.

Also, the movie is dubbed in English and a few other languages and is one of many sniper movies worth checking out.

The movie revolves around the siege of Odessa and Sevastopol.

Lyudmila Pavlichenko is at the shooting range celebrating passing her entrance exams when her shooting catches the attention of the Red Army.

Pavlichenko is a natural-born sniper with skills that set her apart from both men and women.

The movie follows Pavlichenko throughout the course of her time as a sniper through three relationships and her friendship with Eleanor Roosevelt.

Pavlichenko proves her bravery and skill again and again during the sniper movie Battle for Sevastopol.

Was Mr. Rogers A Navy SEAL Sniper In The Military? 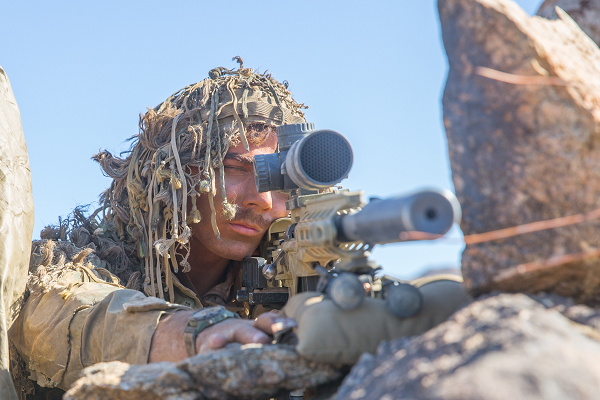 If you're looking for a great sniper movie to watch, check out our list. We feature the 10 best military movies that center around snipers, both fiction and non-fiction.