While Air Force basic training is considered by some to be a bit easier than their counterparts in the Marines and Army, that doesn’t mean you can slack off!

In fact, some even put Air Force BMT on par with that of the Army.

As a result, the Air Force has physical fitness standards you are expected to meet upon arrival at boot camp.

Air Force PT test standards work a little differently compared to the Navy and Army. However, the expectations are comparable.

Read the full article to get an idea of the expectations you are expected to meet in order to continue training toward becoming an Air Force cadet.

Note: If you’re struggling to lose weight for the military, you might want to check out this article.

It’s a 30-day workout / meal plan that was formulated to help you lose weight quick!

April 2021 Update – The PT test standards have not changed for 2021. Everything you will read below is current as of April of 2021.

Jump To A Standard

The Air Force, like other branches of the U.S. Armed Forces, expects you to arrive physically prepared for service.

As a result, the military branch has put together a series of guidelines known as Air Force PT standards.

The physical fitness test requires you to complete three PFT events during the first week of basic training.

The activities are designed to test your endurance as well as to measure your physical strengths and abilities.

You are required to pass the Basic Military Training PFT in order to graduate boot camp and continue to Advance Individual Training.

The Air Force sets suggested standards of what you should be capable of upon entry to BMT to increase your chances of graduation:

After the initial health and physical assessment is completed during zero-week of basic training candidates progress in AFBMT.

The table below explains the requirements of each award at graduation.

Please note that you need to match the requirements of “Liberator” in order to achieve minimum graduation standards.

“Thunderbolt” is an honorary graduate standard.

Meanwhile, “Warhawk” is considered extraordinary by the U.S. Air Force, and the highest physical test standards you can achieve at basic training:

Physical fitness standards do not end after you’ve completed Air Force basic training. You will continuously be physically tested to make sure you’re fit to remain in service.

The Air Force has an “exit-test” of sorts that measures your overall physical ability.

In order to graduate and continue your career in the Air Force, see the chart below for the minimum male PT test requirements under 30 years of age, and 30 – 39 years old:

It’s important to note that if you were to only get the minimum on all 4 components that it would not generate a passing score. The minimum requirements are established so that you test adequately in all components rather than excelling in some while disregarding others.

Once again the initial health assessment is conducted to identify recruits that demonstrate poor physical condition. The Air Force has suggested standards upon entry to increase chances of graduating on time.

Once again the three award types given upon graduation are based on performance:

Just like with males, Females will continue to be tested to measure their physical fitness levels.

In order to graduate and remain in service, see the chart below for the female PT test requirements under 30 years of age, and 30 – 39 years old:

As with the men’s chart, it’s the same for women. If you were to only get the minimum on all 4 components it would not generate a passing score. The minimum requirements are established so that you test adequately in all components rather than excelling in some while disregarding others.

The Air Force recommends that you begin considering PT standards even if you are not of age or may not enlist for six weeks or more.

Boot camp will help get you in shape to pass minimum standards.

However, you can make basic training far easier for your body and mind by being ready to go in advance.

How do you pass the Air Force PT test?

The Air Force PFT is a challenge yet not impossible. Thousands of service members complete it each year.

However, you will be at a disadvantage if you arrive at boot camp without a steady diet and exercise regime.

The expectations of Air Force PT standards do get higher throughout basic training.

Furthermore, the pull-up event and two-mile run are added to Air Force physical fitness standards. Boot camp will do most of the heavy-lifting and get you into shape.

However, we recommend that you exercise at least four to five days a week in preparation.

The Air Force also recommends that you train for the 1.5-mile run by jogging continuously for at least 15-20 minutes at a time.

Once you build up your stamina consider bumping up the jog/run to 30-40 minutes, three to five times per week.

Your pace can also increase over the training period. We suggest you practice sit-ups and push-ups in one-minute intervals.

Lastly, you may also want to consider the use of supplementation.

While they won’t do the work for you, they can certainly help you prep for the Air Force PT test before you ship out.

Check out the below recommendations the editors at OMK have personally tested:

How far is the Air Force PT test run?

During zero-week, new recruits are required to complete a 1.5-mile initial assessment.

The absolute minimum run times to be accepted into boot camp is 18:30 for males and 21.35 for females. However, the goal is to finish the run in less than 13:45 for males, and 16:00 for females to set yourself up for a successful graduation.

After the first assessment, you will eventually get retested in the 1.5-mile run.

Please consult the tables (above) based on gender to find out the different award types you can achieve.

The 1.5-mile run is generally performed in workout gear and with running shoes.

What can I expect during basic training?

The Air Force reports that BMT includes five days a week of physical conditioning. There are alternating days of muscular endurance and aerobic exercises.

Boot camp is a much more enjoyable experience if you are already meeting the minimum PT standards prior to arrival.

Air Force PT test standards are used to make sure new recruits are prepared for service.

The minimum standards make sure the new enlistee is physically prepared for combat and is not a health risk to the unit.

In order to prepare for Air Force Basic Military Training make sure that you start to exercise regularly as well as improve upon your diet.

Both of these lifestyle choices will get you physically prepared for zero-week.

See the physical fitness testing requirements for the other military branches below: 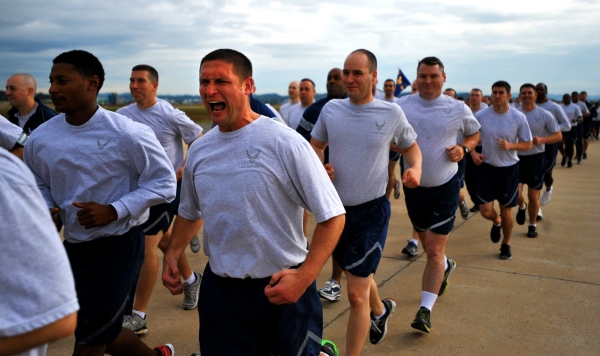 Check out the Air Force PT test standards and requirements for both men and women for 2020. Includes answers to frequently asked questions to help you pass the test the first time.