The U.S. Navy is known for running a tight ship (no pun intended) when it comes to hair, mustache, and grooming standards.

Navy hair regulations are known for their neat, professional demands.

According to the guidelines presented by the U.S. Navy, commanding officers must enforce that haircuts and facial hair do not impede the ability to safely wear and properly utilize emergency equipment.

For this reason, along with the long-standing tradition that U.S. Military members are “clean-cut”, we examine Navy grooming standards in this article.

You will learn the different policies in the Navy regarding haircuts, facial hair, body art, and other grooming standards.

Navy hair regulations for men are what you would expect from your typical branch of the U.S. Armed Forces.

The official policy of the U.S. Navy mandates that hair must be “kept neat, clean, and well-groomed”.

The Navy defines “bulk” as the distance that the “mass of the hair protrudes from the scalp”.

They have a crudely demonstrated illustration of exactly what that means on the official Navy.mil site, which you can see below: 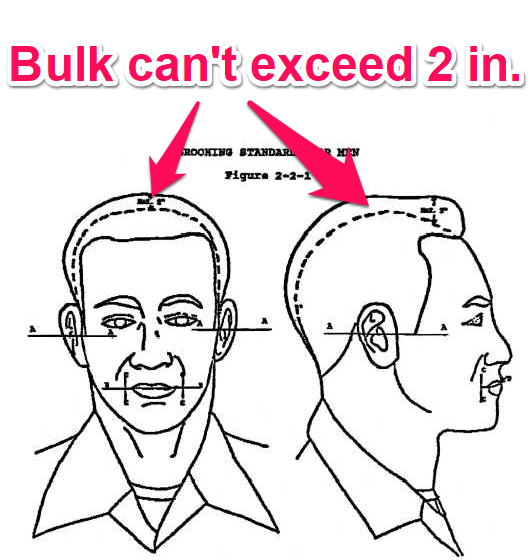 Naval members are not allowed to color their hair different from a “natural look”.

According to official guidelines, “faddish styles and outrageous multicolored hair” is not allowed.

There are exceptions that are made for unique types of hair, like curls or waves, that in some cases may be difficult to maintain a 3/4 inch taper from the back of the neck.

In terms of hairstyles, the Navy authorizes certain looks (i.e. afro) so long as the criteria of the maximum length and bulk, as well as tapered neck and sides,  are not neglected.

The hairstyle must also not interfere with military assigned headgear.

Braided or plaited hair is not allowed while in uniform.

The Navy considers sideburns a part of the haircut and requires that they are neatly trimmed and tailored.

They are not allowed to extend below a point level with the middle of the ear. 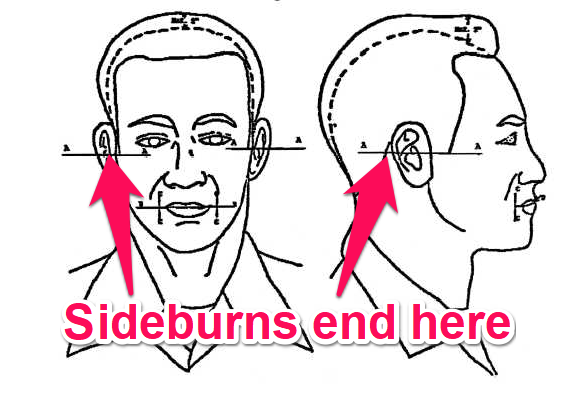 Sideburns must also remain even width and must end with a clean-shaven horizontal trim.

Female Sailors are required to maintain similar standards while on duty or in uniform.

According to the policy, “lopsided and extremely asymmetrical hairstyles” are prohibited.

Furthermore, angled hairstyles must have no more than 1 – 1 1/2 inch difference between the front and back length of hair.

Layered hairstyles are authorized if the layers are presented smoothly.

The length of hair, when in uniform, may touch yet not fall below a horizontal line level to the lower edge of the back of the collar. 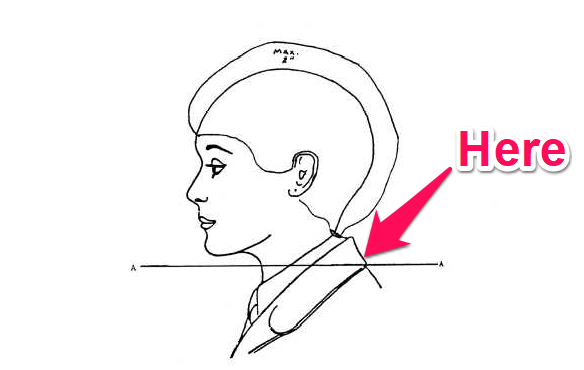 There is more leniency when dealing with jumper collars.

Longer hair like braids or cornrows must be neatly fastened, pinned, or secured to the head, and bangs cannot extend below the eyebrows.

Hair bulk (not including the bun) is measured from the scalp and cannot exceed 2 inches.

When the bun is considered, bulk may not exceed 3 inches when measured from the scalp and the diameter of the bun shall not exceed 4 inches in either the width or the height.

Strands that are dyed with unnatural colors are not authorized.

Like men, the Navy recognizes unique hair textures like curls and waves. They still must minimize scalp exposure.

Hair extensions must match the current hair color. Wigs and hairpieces have other requirements.

Click here for additional standards on specific types of female hairstyles and how the Navy requires you to maintain them.

The U.S. Navy requires that the face be clean-shaven unless a shaving waiver is authorized by a Commanding Officer.

The waiver is sometimes used to grant religious accommodations or other special interests.

A Navy mustache is the one exception.

Mustaches are allowed by the Navy, yet must be kept neat and closely trimmed.

Abusing the privilege will result in stricter facial hair restrictions. (IE no mustache at all)

Navy mustache regulations specify that no portion of the mustache may extend below the lip line of the upper lip.

It is also not allowed to go beyond a horizontal line that extends across the corners of the mouth.

The Navy put out a crude drawing that demonstrates this, which you can see below: 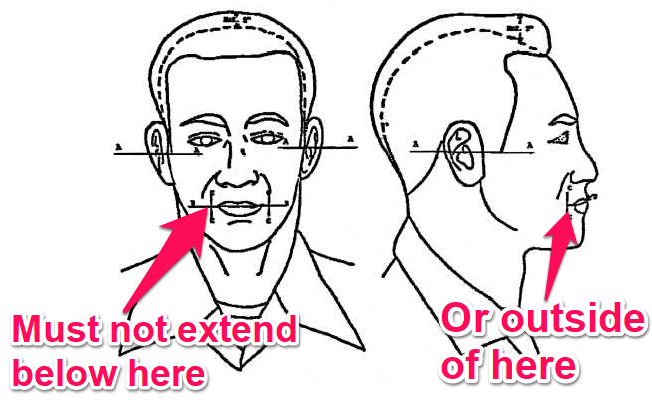 Additionally, no more than 1/4 inch beyond a vertical line drawn from the corner of the mouth.

Related Article: Which Branch of the Military Should I Join?

So, for example, handlebar mustaches or goatees are not allowed. 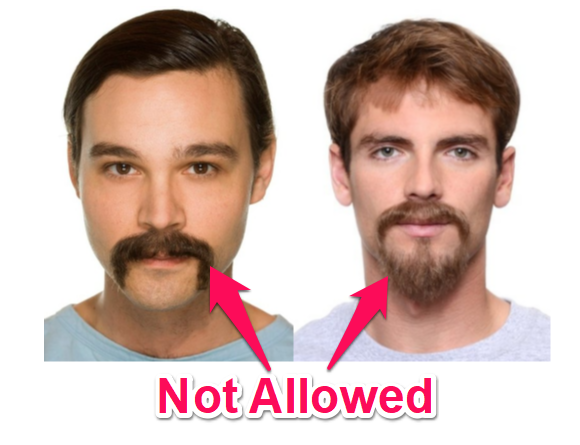 The same rules apply for beards and other facial hair.

The only thing that is permitted are Navy mustaches that fit within the limitations described above.

According to the U.S. Navy, the following personnel are not authorized to wear facial hair of any kind, unless granted a medical waiver or religious accommodation:

The U.S. Navy outlines specific rules and regulations regarding jewelry, including piercings.

According to official policy, jewelry is authorized for all personnel if it remains “conservative” and is “in good taste while in uniform”.

The items must also not present a safety or FOD (Foreign Object Damage) hazard.

Earrings have two different guidelines, one for men and one for women.

As for body piercings, they are not permitted while in uniform.

Consequently, no articles other than earrings for women are authorized while on duty.

These include body piercings of any type, like nose or lip rings.

Body piercings are also not allowed in civilian attire when in a duty status or while on military ships, aircraft, or vehicles.

Body piercings are also not allowed in places under U.S. Military jurisdiction or participating in organized military recreational activities. 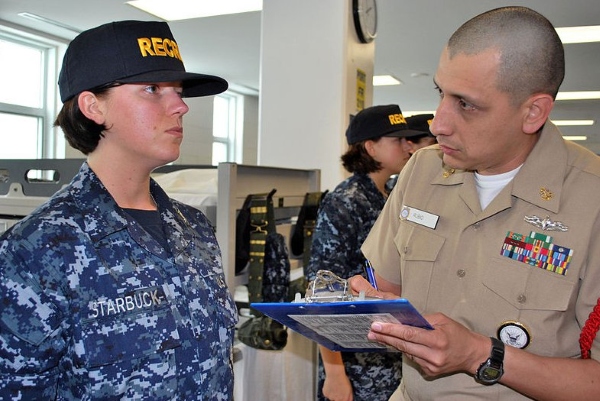 Navy grooming standards apply to a number of other parts of the human anatomy.

Here are some other considerations you need to follow if enlisting in the U.S. Navy:

We actually have a full article on the Navy Tattoo Policy here. 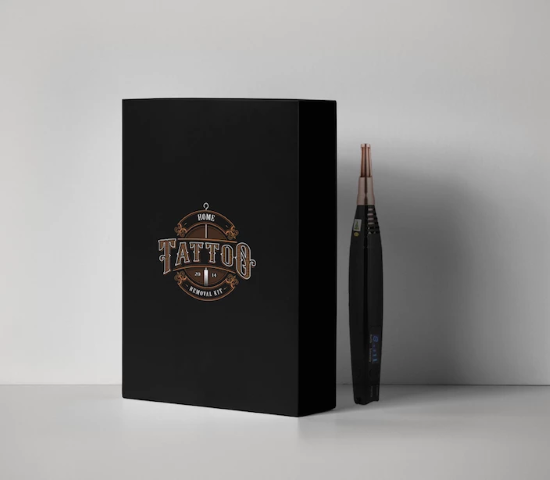 Can you have a beard or mustache in the Navy?

Unfortunately, because the Navy wants their sailors to be clean-shaven, beards are not allowed. Mustaches, on the other hand, are allowed under certain conditions.

Special Note on this: No doubt you have probably seen pics of Navy SEALs with full on beards, and you’re probably asking yourself ‘Why is this guy telling me beards aren’t allowed in the Navy?’

During the wars in Iraq and Afghanistan, special ops forces (such as the SEALs) are  / were commonly in contact with the local population.

Because of this, the Department of the Navy relaxed the rules on beards to help them adapt to the cultural norms in the area of operations.

It’s important to note that this was only applicable to SEALs in specific parts of the world.

As a frogman, you wouldn’t want to be sporting a full on beard when doing underwater operations.

Are hair cuts mandatory in the Navy?

You need to meet certain grooming requirements, with hair length being one of them. All of this is discussed in meticulous detail in the article above.

Can I wear dreadlocks?

Like the Air Force, the US Navy allows female sailors to wear dreads, provided they meet certain criteria. Men are not allowed to have dreadlocks.

Can I wear a ponytail?

Female sailors are allowed to wear a ponytail, provided they meet the mandatory criteria in regards to length and style of the ponytail.

The U.S. Navy has fairly strict guidelines for your presentation. Hair regulations are enforced tightly.

Navy grooming standards have specifics depending on if you are a male or female service member.

The best advice is to wear nothing obnoxious or overpowering that will get the attention of a Commanding Officer.

“Clean-cut” Navy members fit in with the culture of the U.S. Armed Forces.

The Navy grooming standards are used to determine if their Sailors are presenting themselves in a neat and professional appearance. Learn more about the standards here.