There are several different branches of the United States Military, but often the first one that comes to mind to the general public is the U.S. Army.

The Army has an outstanding tradition in the United States. Many have direct relatives, or close friends that have served.

Along with a patriotic duty to serve, the U.S. Army has also assisted many to find a purpose in their life. It has helped military members afford college and get steady pay that otherwise might not have been available.

The Armed Forces offers several benefits as well as some disadvantages to consider. After a careful review it should hopefully make clear if a life in the U.S. Army is for you.

Related Article: 13 Pros And Cons of Joining The Marines

5. An Opportunity to Serve

There are families where children follow in the paths of their parents, grandparents, and even great-grandparents that served.

Some of these individuals served in extreme conflicts like Vietnam, Korea, and WWII.

An opportunity to carry on the tradition of being in the U.S. military is very important for some adults. As is the opportunity to serve the United States.

There is nothing more patriotic than being enlisted in the Armed Forces. It helps boost self-esteem, create discipline, improve leadership qualities, and learn more about true sacrifice.

Some members want to try out the U.S. Army and then make a career out of being in the military. Others seek the military as a means to help fund extended education opportunities.

Whichever your motivation is, there are plenty of job opportunities the Army has to offer.

One of the great benefits of the U.S. Military has always been its allegiance to providing tuition and other funds to service members.

In addition to connecting you with higher education and career opportunities, the U.S. Military also gives you many important life skills that you learn while serving the country.

3. Family Bonds for a Lifetime

While frats and sororities, as well as other clubs, may claim a “true family bond” none really does it as well as the U.S. Army.

The Army, and all the other branches of the U.S. Armed Forces, is a true family environment. You will develop a special bond with other soldiers that is impossible to replicate elsewhere.

Even after you leave the military that bond will last forever. When veterans pass on the streets they wear their stripes proudly and with colors.

The special brotherhood starts at boot camp, translates into potential conflict situations, and then years afterwards. It connects people of all races, religions, creeds, and colors.

The sheer amount of places you will visit in the U.S. Army would cost thousands of dollars to do so if you spent money out of your own pocket.

Thus, in addition to the numerous other benefits of serving in the military, the opportunity literally gives you a chance to see the world.

Some soldiers have observed numerous places in the United States, countless countries, and multiple continents before they turn 30. Who outside the military without deep pockets can claim the same?

If you are adventuresome and want to see other parts of the world where you will not only protect but serve, the U.S. Army is the greatest opportunity to do so on someone else’s dime.

See our article on Army ranks and pay here.

Though joining the military is far from the highest paying job when you consider that basic pay starts in the low $30,000 that is a lot more money than your typical early 20-year old would make elsewhere.

Note: The housing allowance shown above is the maximum allowed. Unless married you live in barracks with no housing allowance at all and have to have command authorization to be housed outside of the barracks and only after E-4 has been obtained.

The same goes for the Food allowance.  This is a maximum, and only given if you’re not living on base or don’t have access to the chow hall.

In addition to steady, reliable pay – soldiers also receive a number of terrific benefits since it’s a government job.

Housing is covered during your time on assignment and stipends exist upon returning home. Free health care is provided to members. U.S. Army members can advance their education through the GI Bill.

There are individuals that want to serve the country in someway, but are unfortunately unable to meet the physical requirements of such a demanding role.

If you are enlisting in any branch of the U.S. Military, expect to get tested physically and mentally more than you have ever experienced.

The pressure starts at boot camp and carries on into service. Soldiers are undeniably fit and not everyone is capable of serving in that regard.

You hear it often but it bears repeating. The U.S. Military is not an easy job on families.

Like a police office or firefighter, the job requires hours, weeks, or months away from family. The person serving not only struggles with these demands, but the rest of the family as well.

Related Article: 10 Benefits Of Being A Military Wife (and 5 not-so good things)

Rest assured joining the U.S. Army is a serious commitment and sacrifice. Some soldiers miss out on a lot of family activities and seeing their children grow up.

3. Little Control Over Where You’re Stationed

Though the U.S. Army will do its best to station soldiers based on requests it is no guarantee, especially if you are new to the service.

When you enlist you have to go in with the expectations that you will have little to no control over where you live.

It could involve getting stationed in a war conflict zone, or other dangerous area. It is part of your commitment to the U.S. Army.

While some people enlist in the military wanting and embracing conflict, it is not for everyone.

In a time of war the U.S. Army is often on the ground, more prone to attacks then other branches like the U.S. Navy or U.S. Air Force.

1. Prepare for Plenty of Discipline

The U.S. Military is the most disciplined work environment you will ever experience. They have rules and guidelines for everything. Some of which you may not agree with fully.

The Armed Forces is no democracy. There is a ranking order and soldiers with more clout get to make the rules (obviously within reason).

In addition to being able to get disciplined and not talk back, new enlistees should also expect a lack of privacy and some uncomfortable living standards – depending on where deployed.

The decision to join the U.S. Army is not an easy one. It comes with major ramifications and will require a long-term commitment.

There is no “two weeks notice” you can give a superior. When you commit, you commit.

However, joining the U.S. Army may be one of the greatest decisions you ever make as there are many benefits to enlisting.

How To Join The US Army 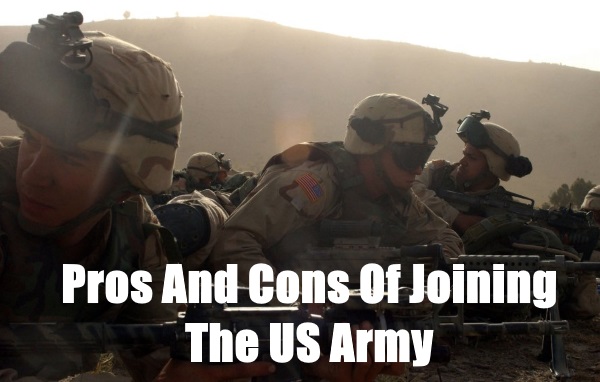 Learn more about the pros and cons of joining the Army, including daily life, pay, and more.