The United States Air Force serves as the aerial and space warfare branch of the military. It was divided from the U.S. Army in the early 20th century in order to support changing technology as equipment went to the air.

The USAF has a structure for how it ranks its service members. The ranking is important as it not only assigns roles and responsibilities, but also relates to how much you get paid.

Here is a detailed outline of Air Force rankings and 2021 pay.

The pay in the United States Air Force improves the longer you serve just like most occupations. As you will notice in the charts (below) the base pay steadily increases yet eventually reaches a cap for each ranking.

Here is a detailed breakdown of USAF ranks and pay based on years served:

The pay rates posted above do not include a variety of bonus and benefits exclusive to the U.S. Air Force.

Additional incentives, pay, and bonuses may also include:

Please check with your local Air Force recruiter to learn more about pay and benefits.

Let’s examine the ranking structure for officers in the Air Force:

Along with the pay charts for enlisted personnel, the above figures for monthly pay are the bare minimums. The good news is that you will at least earn that much and more depending on how many years you have served.

There is a lot to the pay structure in the U.S. Air Force depending on ranking and years served.

The article breaks just the surface of USAF pay and rankings. Please contact a local recruiter to receive more details about expected monthly pay and other military benefits. 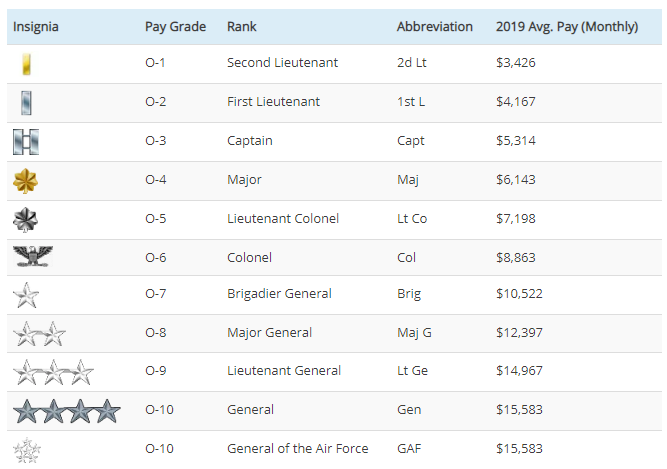 Like every other branch in the US military, your pay in the Air Force is dictated by your rank and length of time in service.