Recruiters work hard to find highly qualified and ambitious recruits, but the Navy has a history of investing in commercials geared to help recruiters out and bring the best into the Navy.

Plus, the Navy commercials are amazing and inspiring.

Since the Navy does impressive work to inspire recruits to turn up and serve their country, and want to revisit some of their best commercials of all time.

This video for the Navy is titled ‘One Navy,’ and it discusses the sailors’ value on the narrator’s boat.

She goes on to say the sailors all have different backgrounds with different life experiences.

While the narrator speaks, the commercial pans to showing sailors sharing where they are from.

You can tell the Navy is an inclusive branch that accepts and celebrates its diversity. Also, they look at diversity as an asset.

When you watch this commercial, it gives you the sense that the Navy gives you not only a diverse learning and working environment, but this happens with a sense of family and togetherness.

Knowing you have acceptance in the Navy and having opportunities to learn and grow in that type of culture is what sets the Navy apart.

As the commercial ends, the words ‘America’s Navy Forged By The Sea’ come on the screen.

In the background are tremendous waves, which leaves you with a feeling of strength within that inclusion.

This Navy commercial begins with showing sailors during a dorm inspection, and the narrator tells you, ‘this isn’t an audition…’

Next, the video shows a helicopter and a ship over the water while saying, “…or the road trip you took to the coast.”

As the narrator continues to say, “…and it’s far from those weekend camping trips.”

As the narrator speaks, the commercial shows service members working together and using big machinery, and setting up massive tents.

The commercial continues to show more sailors working together doing their jobs. Some are jumping out of an airplane while describing how different the Navy is compared to doing jobs such as bagging groceries.

Next, the narrator shows a sailor setting up explosives and talking about the Navy is more than “crashing parties.” Then you hear, “it is not where the seat takes you but who it makes you.”

This particular commercial paints the picture that a job in the Navy is not a routine or run-of-the-mill position. A Navy job will set you apart from the rest.

The phrase ‘It’s Not Just a Job; it’s an Adventure” was a massively successful ad back in the 1980s, and it is clear the Navy was on point with their marketing plans even back then.

This commercial opens to some great music playing, and you can hear what sounds like radio chatter in the background.

Next, the narrator points out that most Navy jobs give sailors technical training while showing clips of sailors doing really cool jobs.

You can see pilots in the cockpits and sailors running the runways on the fighter aircraft carriers, and it has a Top Gun vibe.

As the pilots take off, the narrator encourages you to call your recruiter because joining the Navy is not just a job; it is an adventure.

After watching this awesome vintage commercial, you have to wonder if this is what inspired Top Gun, which came out after this commercial.

This commercial opens up underwater with a beating sound and other underwater noises. A submarine then materializes from the darkness like a ghost.

The following image is inside the submarine, where you can hear the background noise of sailors doing their jobs. At the same time, two deep-sea divers swim up and out of a hatch with flashlights.

As the divers swim to an object, the camera rapidly accelerates up and out of the water, where you meet the view of a small Navy watercraft speeding by with armed sailors on the ready.

Next, there are helicopters, warships, flight decks, and pretty much all the Navy’s cool things.

After that view, crisis happens, and someone in the submarine reports a problem before the lights go red and pilots start taking off from the flight deck.

After some super cool shots of multiple planes taking off and being in the cockpit with a pilot, you see what appears to be this futuristic plane heading to space.

The parting words are ‘from the depths to the stars,’ and you can still hear the pulse of the ocean’s sounds along with the eerie sounds of space, which sounds amazing.

The ‘You are Tomorrow. You are the Navy’ commercial is another nostalgic look back at the late 1980s.

It begins rather rapid-fire with a young man studying, hanging out, then studying again before going back to him working as what appears to be a DJ.

The scene cuts to the guy competitive diving to a Navy ship on the ocean.

You get the sense from this commercial that this all-around busy and hard-working kid is exactly what the Navy is looking for. Also, with all the things in which he appears to have interest, it is easy for viewers to see themselves in this commercial.

Next, the narrator reaffirms this idea by saying the Navy knows you will be a part of shaping the future and invites you to join the Navy to both serve your country and learn the technology of tomorrow.

As the narrator speaks, you see flashes of a tremendous number of sailors doing their jobs

The Navy Seal – SO commercial is incredibly motivating.

If you did not have hopes of being a SEAL, you will when you are done seeing this Navy commercial.

The commercial begins, and you see these missile-type objects underwater, and the hatch of the object opens, and a SEAL diver swims out.

A SEAL narrates the commercial, and he explains they converted missile tubes so SEAL team members could sneak in. He also explains that Special Warfare Operators, or SOs, are Navy SEALS groups that work together.

As the SEAL explains what it means to be a SEAL, you see them jumping out of planes, training with several types of weapons, and training in freezing temperatures that would kill someone unskilled.

While you watch all these SEALS go through rigorous training, you learn that it is not just about physical fitness.

It takes a tremendous amount of determination or grit to complete the program and operate when so many people count on your ability to do your job.

This next navy commercial is short, but it hits hard.

It begins with great music and shows a Navy ship on the ocean before seeing a pilot. As you witness sailors jumping into the water from a helicopter, you are asked the question, “why should you consider getting an education in the Navy?”

Next, the camera pans to a massive flight deck of a Navy ship, and the narrator answers, ” THIS is one of your classrooms.”

The rock music continues as the screen flashes to other sailors at work, and the words Navy pops up with the statement “accelerate your life.”

It sure beats sitting in a classroom all day!

This powerful commercial begins with a sailor in full combat gear and weapons, and you hear his voice saying, ” I am a United States Sailor.”

Next, you have another sailor continue by saying, “I will support and defend the constitution of the United States of America.”

At this point, you realize you are witnessing sailors of different jobs and backgrounds saying the Sailor’s Creed.

Also, it is not just the faces of sailors; it is men in women in the middle of their work every day.

The pilot is flying, the Navy SEAL silently emerges from the inky water, and even a combat team member on the ready with her weapon.

As they all go through reciting the Creed, it is clear the Navy values diversity and the honoring of the Creed itself.

Your final word is ‘A Global Force for Good.”

The commercial focuses on the USS Enterprise, which is a decommissioned United States Navy aircraft carrier.

This particular carrier was the first nuclear-powered carrier, and she is the longest carrier, as well.

Also, this particular aircraft carrier served the United States for 55 years, making her one of the top three oldest carriers for the Navy.

Knowing that about the Enterprise makes the Navy commercial ‘Let the Journey Begin’ even more compelling.

The opening shot is of the Enterprise with the sunset in the background, and the narration is by several voices, some of them overlapping.

What you hear in the commercial is that those who served on the Enterprise were a part of a culture and character “forged in valor.” Also, the Enterprise was where “courage was found.”

After going through all the accomplishments of both the Enterprise and those who served in the Navy, viewers are asked, “What did you do today?”

I suspect this commercial alone had recruits lined up ready to go.

This one is by far the best Navy commercial I’ve ever seen! I remember when it first came out thinking, ‘OK, what the heck is this all about?’

The commercial is simple. It shows waves breaking onshore on a full-moon night.  The waves casually break onshore regularly and with a rhythm, while the clouds overhead intermittently and briefly cover up the moonlight, casting a pitch-black shadow.

When the moonlight is again revealed, a set of 4 footprints trail from the surf zone to the beach. It’s pretty clear now that 4 Navy SEALs created these footprints on a covert mission.

As quickly as the footprints are revealed, a large crashing wave sweeps over them, covering up all Navy Special Warfare commandos tracks.

One of the comments on the video sums it up the best: Simple. Subtle. And Frightening.

I don’t know about you, but I’m ready to sign up! 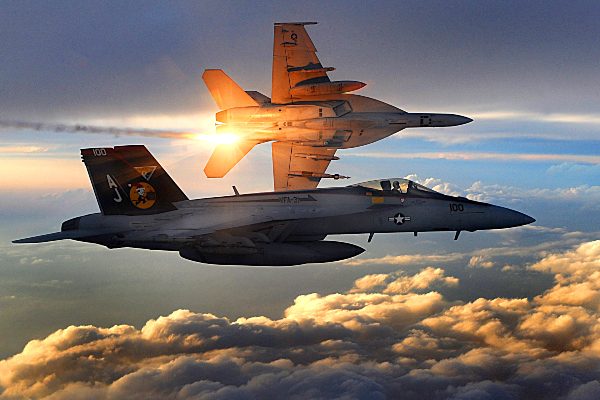 See our choices for the 10 best Navy commercials of all time, including advertisements like 'It's Not Just a Job; It's an Adventure', 'Accelerate Your Life', 'A Global Force For Good', and recruiting commercials for the Navy SEALs.