Mr. Rogers has enjoyed a posthumous resurgence over the last few years thanks to a couple of critically-acclaimed films regarding the larger than life figure.

Fred Rogers, who is best known by his TV moniker “Mister Rogers”, starred in his own children’s program for more than 3 decades and was universally beloved.

The cult appeal of Mr. Rogers has led to some wild assertions, many of which are false and capitalize on Rogers notoriously squeaky clean public image.

For example, there are claims online that suggest that Fred Rogers served in the military as an elite sniper.

Some have claimed that he was a Navy SEAL.

Yet another claimed Mr. Rogers was a Marine that served in Vietnam.

Are there any truth to these claims?

The short answer is no, though the truth gets a little more complicated when you examine the life of Mr. Rogers.

Who is Mr. Rogers anyway?

Fred Rogers was born March 20, 1928, as the nation braced for the Great Depression.

The young man had an early passion for education, faith, and entertainment which he successfully combined into his beloved TV series, “Mister Rogers’ Neighborhood”.

The PBS show which was aimed toward a preschool audience introduced children to important concepts and life lessons.

Mr. Rogers was a master at teaching these lessons to children through the use of music and guest appearances.

While Mister Rogers Neighborhood was groundbreaking and set the precedent for future TV children’s programs, many wanted to know more about the real Mr. Rogers.

Despite not being afraid to tackle difficult subjects on his show like death, sibling rivalry, and divorce – Mr. Rogers maintained a very private personal life.

It wasn’t until recently, following his tragic death from stomach cancer in 2003, that more biographical information came out about the TV legend.

Unfortunately, it has also contributed to spreading some false rumors about the devoutly religious man.

Mr. Rogers was an ordained Presbyterian minister and often introduced the core tenets of Christianity to his audience.

Nonetheless, he rarely spoke about his faith or any private matter directly on camera and insisted on leading by example.

The mystery surrounding his personal life has led some to ask one important historical question – Was Mr. Rogers in the military?

Fred Rogers has been the subject of a resurgence in pop culture following the release of an award-winning biographical documentary in 2018.

Additionally, Tom Hanks starred as Mr. Rogers in the 2019 Hollywood blockbuster “A Beautiful Day in the Neighborhood”.

It has contributed to various stories about the extremely private man, many of which sound too absurd to be true.

But what about military service, was Mr. Rogers in the military?

If you conduct a quick internet search you will probably find a variety of sources that assert that Fred Rogers served in the U.S. Navy.

Moreover, some assertions go as far to suggest that Mr. Rogers was active in the Vietnam War.

In fact, he was a highly decorated sniper that recorded an unusually high number of confirmed kills while overseas.

After his time in the military ended, Mr. Rogers decided to clean up his appearance and ditch the military uniform for the signature sweater.

The constant appearance of the sweater, “historians” argue, indicates that Mr. Rogers was attempting to conceal his full-sleeve tattoos and war wounds.

It would all be fascinating if the story was true, which it is not.

The primary reason Mr. Rogers gets linked to military service is that he received a Presidential Medal of Freedom from George W. Bush.

While the award is generally reserved for valiant acts of service in the military, it can also apply to other industries, such as television.

Nonetheless, this faint connection has contributed to a barrage of wild accusations that link Mr. Rogers to military service and other urban myths.

Those that have studied the life of Fred Rogers can attest to how bizarre the claims are that he was a highly decorated sniper during the Vietnam War.

While it does serve as an interesting anecdote to an otherwise squeaky clean individual, the claims are absolutely baseless.

For starters, Fred Rogers was born in 1928 and considering that the Vietnam War didn’t begin until 1955, he would have been too old to serve.

The age factor alone greatly discredits any realistic possibility that Mr. Rogers served in the Vietnam War, either as a Navy SEAL or Marine Scout Sniper.

Furthermore, there is no evidence that Mr. Rogers ever had time to serve in the military.

He went directly to college after completing high school where his entertainment career started shortly after graduating from Rollins College.

It also doesn’t make sense why a recent graduate of the Pittsburgh Theological Seminary would seek a combat position in the military where he was allegedly celebrated for maintaining a high head count.

Other Myths and Urban Legends

The primary “evidence” that Mr. Rogers was in the military is connected to his attire.

Recent claims that point to military service suggest that Rogers insisted on wearing long-sleeves to cover up his numerous tattoos.

The pundits claim that it is further evidence that Mr. Rogers was attempting to conceal his past history in the U.S. Navy.

However, the assertion is nothing more than a long list of tall tales that have been exaggerated about the whole children’s entertainer.

There are other urban legends that hint at Rogers lacking true character like the famous GIF that shows him flipping off a camera.

Lastly, there are some more damaging accusations about Mr. Rogers, like the baseless claim that he used the TV program as a cover to abuse children.

However, like most reckless conspiracy theories, there is little to no evidence to support any of these accusations as nothing more than speculative.

Mr. Rogers was an iconic TV personality that was known for valuing a pure and clean lifestyle.

As a result, it’s not shocking that following the death of the highly private man, wild and reckless claims would surface on the internet.

While it may be fascinating to think of Fred Rogers as a highly skilled and deadly sniper for the Navy SEALs during the Vietnam War, it just doesn’t make any sense.

There is no direct evidence that connects Mr. Rogers to military service aside from receiving the Presidential Medal of Freedom from President George W. Bush.

The claim that Rogers sported his signature sweater to cover up Navy SEAL tattoos is a huge stretch and doesn’t fit the persona of the soft-spoken, passive, highly religious individual.

What do you think, was Mr. Rogers in the military? Leave a comment below! 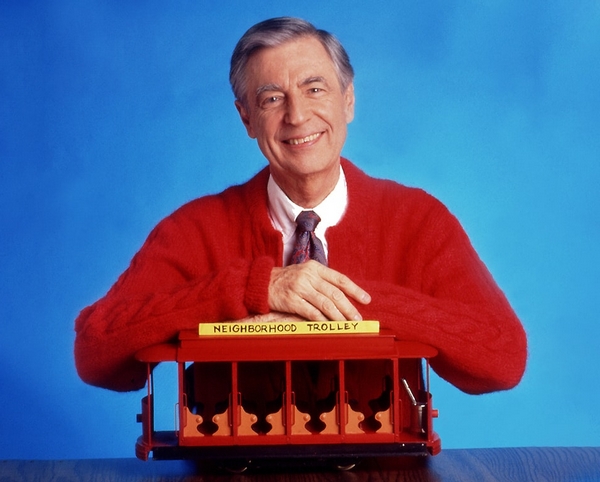 Did Fred Rogers (aka Mr. Rogers) serve in the military? Short answer, no. Learn more about the myths about him being a Navy SEAL sniper that served in the Marines during the Vietnam War, and other crazy myths.