This eye examination is intended to determine if a recruit needs glasses.

If eyeglasses are necessary, recruits will be issued official lenses and frames to wear during their time at Basic Training.

Even if you attend Basic Training with your own “civilian” glasses, while you are there you must wear your official government-issued glasses once you receive them for the remainder of training.

These government-issued frames and lenses have traditionally earned the nickname “BCGs,” or “birth control glasses,” due to their lack of aesthetic appeal.

However, in the past few years, the military branches have instituted measures in attempt to overcome the reputation of BCGs so that service members feel more comfortable and attractive when wearing their GI eyewear.

What Are Birth Control Glasses?

These frames are issued to military recruits or personnel in need of corrective lenses for their vision.

They are part of the standard gear issued during Basic Training.

Traditionally, S9s have consisted of thick, brown plastic frames and large lenses so they would be less likely to break.

However, their look was considered so unattractive for the wearer that people began calling them “birth control glasses.”

This nickname implied that any chance of connection with the opposite sex while wearing these glasses was almost nonexistent.

The inception of BCGs took place during World War II when there was an unprecedented need for U.S. forces.

Poor eyesight was not an eliminating factor for those going into military service.

Unfortunately, many of these service members with less-than-optimal vision had their glasses broken and faced difficulty in purchasing new ones.

This prompted a directive to provide eyeglasses, repairs, and replacements to military personnel in need of them.

At that point, the U.S. Army decided to develop glasses for its soldiers.

Initially, the Army approached nine suppliers to meet the huge demand for eyeglasses.

However, the difficulty in maintaining that many contracts led to the selection of Bausch & Lomb as the company who would provide the quality and quantity of glasses needed by American troops.

At that point, the Department of Defense acknowledged that many service members were rejecting such GI eyewear once enlisted due to the uncomfortable feel and unattractive look of the frames and lenses.

This has led to expanded choices among military personnel for eyewear.

Adequate vision has always been associated with military readiness and has historically been part of physical standards required for service.

However, it wasn’t until 1917 that the U.S. Army developed a program to assist soldiers in need of corrective eyewear.

At that time, the charge was just 10% over what the government was charged for frames and lenses.

This created the need for optical manufacturing units.

Within a year, the Army allowed glasses to be issued for free to enlisted personnel.

Unfortunately, the program for government-issued eyewear at no cost was eliminated in 1922.

Military physicians would still prescribe corrective lenses for those who needed them, but they were no longer issued free of charge.

Initially, military eyeglasses were made from metal, including silver and nickel.

In 1968, the military began issuing black cellulose acetate frames which continued into the mid-1970s.

The S9 spectacles which became infamously known as birth control glasses were introduced in the mid-1970s.

Today, military personnel still have the option of wearing S9 eyeglasses with their sturdy brown frames.

In fact, these frames are called S9 Brown “BCG” and they are manufactured by Rochester Optical.

Though the BCG frames are no longer issued during Basic Training, some troops choose to adopt their look once they are enlisted.

This is perhaps for a “retro” or “vintage” look.

What Kinds Of Glasses Does The Military Issue Now?

The military is now offering a new design of eyewear with the hope that service members will retain and care for their glasses more consistently than they would for BCGs.

The new 5A standard-issue eyeglasses have replaced the S9 model.

The 5A frames have been tested for strength and comfort and are considered more stylish with their sleeker black frames.

This current basic issue eyewear is intended to resemble slimmer and lighter “civilian” glasses for a more contemporary look.

In addition, the goal is for service members to wear their new 5As more regularly for improved performance and training, even after boot camp.

Rochester Optical is the manufacturer of standard issue eyewear for the U.S. Armed Forces.

Called the R-5A, these eyeglass frames are made of durable plastic and are available in brown and black.

The frames are unisex, with a rectangular shape that allows for digital progressive lenses.

Compared to BCGs, the R-5As are considered stylish and comfortable as well as durable.

For active-duty service members, reservists, and National Guard members who meet the criteria, the military has approved ten frames that are more representative of current styles worn by civilians and sold in commercial markets.

These frames consist of a variety of materials and colors, including black and gray.

They are available through military providers under the Frame of Choice Spectacle Program.

Though the unattractive frames of “birth control glasses” are no longer issued, recruits in Basic Training must still wear government-issued eyeglasses for vision correction during this time.

Contact lenses are not approved for wear at any point during Basic Training.

After graduation from Basic Training, military members can wear civilian glasses while in uniform if they meet regulation standards.

Of course, standardization of military dress and regulation appearance is prioritized by all branches of the U.S. military.

However, some concessions have been made across time.

The switch from S9 BCGs, for example, to 5A GI frames reflects the military’s progress in considering the personal comfort of troops in addition to their professional look.

To ensure compliance with regulations, recruits who become enlisted personnel have the option to continue wearing their GI eyewear.

If enlisted troops prefer alternative frames, they should have a clear understanding of the guidelines for approved eyewear determined by their military branch.

What To Bring To Navy Boot Camp 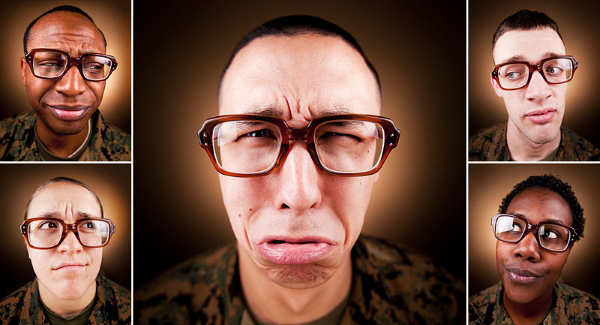 Learn more about what Birth Control Glasses are, including their history, the different types, what's issued now, and more.