The “Murph” workout is named for Lieutenant Michael Murphy who died in 2005 while serving in Afghanistan.

The Murph workout is performed on Memorial Day in honor of Michael Murphy and all fallen service members.

This CrossFit-based workout includes a challenging, timed regimen of running, push-ups, pull-ups, and squats while wearing a weighted vest or body armor.

If you are interested in completing the Memorial Day Murph Workout, this provides the information you’ll need.

1. What Is The Murph Workout?

Most people who are familiar with CrossFit are aware of the Murph Workout Challenge.

CrossFit is a form of interval training.

It primarily consists of strength and conditioning workouts made up of functional movements and performed at high intensity levels.

The Murph workout, in order, includes:

The entire workout is timed and typically performed while wearing a weighted vest of 20 pounds.

To complete the standard, full-version Murph WOD at competition level, the following is required:

The official structure of the Murph workout must start and finish with a one-mile run.

However, there are two methods of approach for completing the pull-ups, push-ups, and squats portions.

The common strategy among Murph competitors is to “partition” the repetitions (reps) of 100 pull-ups, 200 push-ups, and 300 squats into 20 rounds.

Therefore, each round would include 5 pull-ups, 10 push-ups, and 15 squats.

Another partition approach is for each round to include 5 pull-ups, 5 push-ups, 15 air squats, and 5 push-ups.

This helps not only maximize your time, but also provides a small break between push-ups to allow for the arms and core muscles to rest.

In Order Or Un-Partitioned Method

Some choose to do the Murph workout in order, or in an un-partitioned manner.

However, this is a more difficult strategy especially in terms of completing the full set of push-ups without rest.

In addition, some participants perform the Murph workout without a weighted vest.

This creates a noticeable variation in terms of completion time.

The average time for completing the Murph workout is 47 to 57 minutes, though any time close to an hour is considered good.

2. Who Was Lieutenant Michael Murphy?

Some people are familiar with Lt. Michael Murphy’s story from the book and/or movie Lone Survivor.

Lt. Murphy was a Navy SEAL team member who died serving his country in Afghanistan during Operation Red Wings in 2005.

On June 28th of that year, Lt. Murphy along with Petty Officers Danny Dietz, Matthew Axelson, and Marcus Luttrell were dropped in the mountains of Afghanistan.

They were ambushed by militiamen due to locals who found their position by accident and gave it up.

During the resulting fight, Lt. Murphy risked his life by coming out from cover and finding a signal to call for help.

Of the four service members ambushed, only Luttrell was able to escape, though barely alive.

Luttrell was discovered and cared for by locals in a village for over three days before he was rescued by U.S. Armed Forces.

Lt. Murphy’s courage, self-sacrifice, and devotion to his fellow service members by relaying his unit’s position led to Luttrell’s rescue and the recovery of the remains of the three killed in that battle.

3. Origin Of The Murph Workout

Lt. Michael Murphy himself originated what he called the “Body Armor” workout.

After his death, it became a localized CrossFit WOD.

In 2007, Dr. Joshua Appel decided to bring the “Murph” to his CrossFit group as a means of recognizing Michael Murphy, and others who lost their lives in active service, on Memorial Day.

Appel, serving as an Air Force pararescueman, was the team leader that helped rescue Luttrell.

In addition, he helped to recover the bodies of Michael Murphy and Danny Dietz, keeping the body armor he wore while doing so.

By 2010, the annual workout had spread, and with cooperation between Appel and Michael Murphy’s father, the Murph Challenge became a national fundraiser.

4. Why Is The Murph Workout Associated With Memorial Day?

CrossFit features “hero” WODs (workouts of the day), such as the Murph workout.

These WODs are completed in honor of the memories of Armed Forces service members who sacrificed their lives.

This has become an international event to honor fallen service members and the legacy of Lt. Michael Murphy.

In general, the tradition has grown for gyms to close on Memorial Day and offer Murph as the only workout.

This is often followed by a community event such as a cookout or picnic to commemorate the day.

5. Preparing For The Murph Challenge

The Murph Challenge is a difficult and long workout that requires endurance as well as strength.

Though running speed is important for the one mile run at the beginning and end, it is the pull-ups, push-ups, and squats that present the greatest challenges in terms of time and completion.

Therefore, it is essential to have a strong foundation in each of these movements to finish the workout safely and avoid physical injury.

Extra care and caution should be taken in preparation for those who intend to wear a 20lb vest while doing the workout.

There are some modifications for each physical challenge to help train and prepare for the Murph workout.

In addition, mental preparation is an important element when it comes to the Murph workout.

Participants are recommended to commit to a strategy in approaching the workout that suits their individual level of physical fitness and ability.

This might mean foregoing the 20lb weighted vest, avoiding any sprinting during the running portions, and using the partitioning method for the pull-ups, push-ups, and squats.

Exercises in mindfulness and controlled breathing can enhance endurance and help reduce feelings of being overwhelmed.

It’s also essential to hydrate before, during, and after this intense workout.

The Murph Challenge should ideally be practiced and performed in a relatively cool environment to avoid the potentially serious consequences brought on by heat stroke and heat exhaustion.

The below video does a pretty good job of describing how to prep for the Memorial Day Murph Workout:

The Memorial Day Murph Challenge Workout is a way for people to remember fallen service members, like Lt. Michael Murphy.

In addition, this rigorous workout is a method of acknowledging the strength, courage, and discipline among those in the Armed Forces, serving past and present.

Anyone can sign up for and participate in the Murph workout, regardless of fitness level.

However, it is strongly recommended that participants modify the exercises to meet their individual physical needs and abilities.

For those who are interested, registration for the Murph Challenge begins online on April 1st each year.

Most Famous Navy SEALs Of All Time 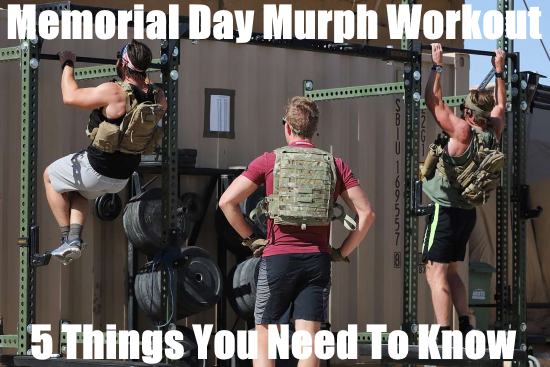 The Murph workout is an annual event that is held on Memorial Day to honor former Navy SEAL Michael Murphy.