When male recruits arrive at military boot camp, they receive what is called an “induction” or “buzz” haircut.

The whole head of hair is cut with clippers, without a guard, leaving the head with just stubble and a shaved look.

There are practical and traditional reasons for why they give this haircut in the military, though this applies to just males who are potential enlistees or cadets during their respective basic trainings.

After basic training, service members can choose a regulation-approved haircut.

Why Do They Shave Your Head In The Military?

Though technically your head is not shaved in the military, males are given very close haircuts during basic training.

Such induction or buzz cuts have become a rite of passage in joining the U.S. military, dating back to George Washington’s leadership of the Continental Army.

The initial purpose of wearing short hair was to enhance cleanliness among service members.

Shaving regulations relaxed beginning with the Civil War, though head and facial hair was expected to be neat and trim.

During World War II, the U.S. Army implemented the buzz cut upon induction of recruits.

The official explanation for this practice was field sanitation, to help reduce the risk of spreading hair and/or body lice.

In addition to personal hygiene benefits, the military buzz cut has had the following effects:

Today, buzz cuts are given to recruits shortly after their arrival at military basic training.

During the rest of boot camp, recruits receive trim cuts about once per week.

In some branches, the buzz cut may not be repeated but the sides and back may be trimmed.

At the beginning of boot camp, male recruits appear to have shaved heads due to the close buzz cut.

By the time of basic training graduation, most recruits have a bit more hair that is visible.

Do Women Have To Shave Their Head?

Women do not have to shave their heads as recruits or cadets in basic training.

In fact, there are military regulations in some branches such as the U.S. Army stating that women cannot shave their heads.

However, just like male enlistees and cadets, there are haircut requirements for female service members.

Female recruits must have clean, well-kept, and typically short hairstyles so as to appear disciplined and professional.

When women arrive at boot camp, their hair must meet the following requirements when in uniform:

Longer hair must be tied into a bun and kept above the collar.

For Navy basic training, female recruits do receive haircuts to ensure stipulated standards are met at all times.

Women in the Navy can allow their hair to grow after completing basic training.

However, they must continue to wear and style it so that standards and regulations are met when in uniform.

What Kind Of Haircut Can You Have After Basic Training?

After basic training, service members have options as far as approved regulation haircuts.

Of course, male troops can continue wearing the buzz cut style if they wish.

Other approved options include:

Essentially, male military service members are expected to project a clean, professional, and uniform appearance according to official regulations.

This means haircuts that are short, neat, and well-groomed.

Airmen must have tapered hair above the ears and at the nape of the neck. Hair may not touch the ears, eyebrows, or collar.

The hair length and bulk must not interfere with proper headgear, and any hair coloring must look natural.

Sailors must have hair above the ears and at the nape of the neck tapered from the hairline upward at least ¾ inch.

Hair cannot touch the ears, eyebrows, or collar and cannot be longer than four inches.

The length and bulk of the hair cannot interfere with proper headgear and hair cannot be styled such that it extends more than two inches from the scalp.

Soldiers may not have haircuts that appear trendy, spiky, or disheveled. The hair must be tapered at the neckline and to conform to the shape of the head.

Hair cannot fall over the ears or touch the collar. Soldiers can wear hairpieces to cover hair loss, but they must conform to haircut regulations.

Hair color must be a natural shade.

Marines must have hair that is evenly graduated from no length at the hairline, with no outline or edging.

Their hair cannot exceed three inches in length or styled in such a way that it protrudes from the scalp by more than two inches.

Hair must not protrude beneath proper headgear or look unsightly. Hair coloring must look natural.

There are rare exceptions to the rules and regulations of military haircuts.

In some instances, special operation forces such as Navy SEALs, Green Berets, etc., are offered some leniency to allow them to blend into non-military populations.

These relaxed grooming standards are known as “social camouflage.”

These specific groups are allowed to grow their head and facial hair in such a way to lower their risk of standing out during required missions.

Men in the U.S. Armed Forces are required to have short haircut styles, beginning with a buzz cut at the start of basic training.

This allows for uniformity in appearance, practicality, and cleanliness.

Many male recruits consider the “shaved” head experience of this induction cut to be a rite of passage in joining the military.

Female recruits are held to different standards in terms of haircuts, so they do not undergo a “shaved” head or buzz cut.

Once basic training is complete, male service members can choose other options for their haircut.

However, it must meet discipline and grooming standards set forth by regulations according to each branch. 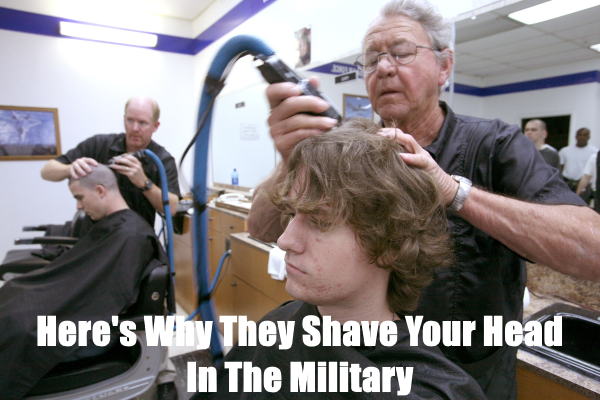 So, why exactly do they shave your head in military boot camp and basic training? Find out why they do it here!