Your buddy next to you gets shot in the arm, and needs to be evacuated pronto.

In the chaos of war, it’s not as easy as just picking up the phone and calling 911 for help.

There are rounds going off nearby, it’s loud, and you can’t hear anything.

But you need to get him out of here fast…

This is where a 9 line medevac call comes in…

I’ve personally made hundreds (if not 1,000’s) of medevac calls like this, and it’s extremely important for you to get them right the first time.

Throughout this article, we’ll discuss what exactly a 9 Line Medevac call is, how they’re formatted, and 2 example scenarios of actual calls I’ve made.

What Is A 9 Line Medevac?

A 9 Line Medevac is a standard collection of codes that every Marine, military officer, helicopter and medical personnel (everyone at the Shock Trauma Platoon (STP) and Forward Resuscitation Surgical Suite (FRSS)), and all security guards are trained in; so, it can be universally applied.

Each one of the nine lines provides vital information that’s used to transmit from how many patients there are, the mechanism of injury, necessary equipment to bring, the location, and the possible hostile/non-hostile scenarios that could have manifested.

It’s communication that’s done between the point of injury and the would-be medevac team.

A 9 Line Medevac is not mandatory in garrison—as in a civilian setting.

There is a military version and a non-military one used, but for the sake of this article I will discuss the one used by U.S. Armed Forces.

What Is the Format of A 9 Line Medevac?

In short, a 9 line call go’s in this format:

Here’s details on what each one of these lines mean.

A specific location is given in coordinates. It would be communication in the form of latitude and longitude. This is where the patient pick-up would be.

This is going to be the channel you’re going to go to. The radio man (for platoon), corpsman (for recon team) or CIA agent (SEAL team) will spit a 9 Line off, so the enemy can’t follow the code.

For example, CT (Charlie Tango) may be the radio frequency channel; Charlie may stand for latitude and Tango might be for longitude.

Line 3 – Number of patients by precedence:

A – None: Basically, no special equipment is required; just safely land the helicopter for extraction.

B – Hoist: This means that the Medevac team is going to have to pick up the litter and cannot land the helicopter. Maybe there is mountainous terrain and will need to hover. Team will need to clip a rope onto the litter and “hoisted” up. This type of scenario is to be expected.

C – Extraction equipment: This is where your patient is encased in something—maybe a smashed-up Humvee or whatever their mechanism of transportation was, and the patient is stuck in it. The Medevac team will need some type of “Jaws of Life” equipment to get him out.

D – Ventilator: Basically, this is the information needed to inform helicopter personnel if they are going to need a carousel on the helicopter. This allows for multiple patients to be loaded onto the helicopter on litters. The number of patients will help determine this.

The configuration and structuring of the litter patients on the carousel will allow support units to set patients up onto oxygen for the duration of the flight.

A – Litter: How many litters are going to be on there? Support unit will need to compensate with a carousel. This structure allows for multiple patients to be stacked securely for evacuation, so Medevac team needs to know how many litters there are.

B – Ambulatory: Patients are listed as ambulatory if they can walk with little to no assistance.

This information informs the Medevac team whether the area has been secured or will require an escort.

N – No enemy combatants are at the pick-up site.

P – This is where potential enemies may be in the area, so use cautionary escort support in case of possible RPG or troop threat.

E – There are enemy troops in the area, give number if possible (whether there is a vehicle or just ground troops). This is also where you notify them if there is going to be an RPG or any aerial assault weaponry.

X – Confirmed enemy troops in the area, are hostile and heavily armed. Armored escort IS required.

A – Panels: This provides information to what color the panels are going to be. Panels are carried in the corpsman/medical personnel’s pouch. Each day it is a different color. Command Center knows ahead of time what color is being used.

B – Pyrotechnic Signaling: Using flame or lanterns by burning a different colored flame for each operation. Most commonly used method at night.

C – Smoke Signaling or “Pop Smoke,” this information provides what color smoke will be used. Command Center knows ahead of time and is changed with every operation. Basically, this is really strong burning smoke and is not used if high winds or heavy rain is present. This is usually the most common method used.

D – None. No signal required. Sky is clear and easily able to be seen.

E – Other: This information will be transmitted beforehand. If in heavy enemy territory or when there is a threat of possible enemies listening on the line.

A – Patient is a US American troop

B – Patient is a US civilian noncombatant

D – Patient is a local national

E – Patient is an enemy prisoner of war (EPW)

Is there a contamination at the site? Will Haz-Mat suits be required? This information will provide Medevac team with potential threat to containment inside of the helicopter. This is information that will lead to possible imminent infection or possible lethal exposure.

B – Is it biological warfare? If so, what type?

C – Is there chemical warfare present? If so, what type?

Examples of A 9 Line Medevac Call (*Note: The following are real life scenarios from actual combat)

“We were in Upper Kandahar during a normal routine patrol and a Marine from 1st MAR stepped on an IED. During the IED explosion we started to take what seemed to be light fire from a single shooter. So, we immediately had one Killed on Site (KOS) and two injured. We performed assessments and began immediate treatment. Smith called in for aerial support and medevac to extract the two wounded Marines and KOS Marine.”

Line 1: We gave coordinates in Upper Kandahar where the extraction was needed.

Line 2: We changed comms three times and ended up doing our route call to CDC at Bastion because it was closest to us. We comm checked the frequency and continued our 9 line.

Line 4: We needed two IV suspensions. I needed a body splint for the 1 marine because he had multiple breaks in his upper and lower extremities and his bones were pretty much mush. I had already put 1 King in and bagging him. I needed a special ventilator.

Line 6: E – Hostiles in the area. We had not yet secured the single sniper we were receiving fire from and we were requesting definite escort.

Line 9: No detected NBC at this time.

“We called in an aerial lift for Afghan National Police that rolled their MRAP severely injuring three and killing the driver. The mechanism of destruction was unknown at that time.”

Line 1: Coordinates were given outside Camp Jackson on a push.

Line 2: Comms for the day were separate. We used both to call in for the Afghan Nationals and the CDC was being run by the Geneva Forces—part of our joint alliance out of Camp Dwyer.

Line 3: 3 urgent and 1 was left at site for National pick-up (deceased).

Line 4: None was request. All supplies were already on hand because we had a well-stocked medical MRAP at the scene.

Line 6: No escort requested at this time.

Line 9: No NBC detected at this time. Stand-by for possible deviation.

We used a 9-line is a standard secure way of relaying information between patrols and patrol teams that were over the wire and garrison command.

It is a standard format that’s universal during wartime as a means of communication to detail important information and as little information as possible to complete an objective which is typically the extraction of an injured individual to a higher echelon of care. 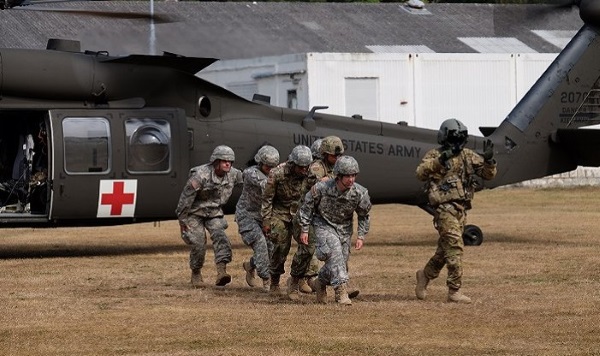 Learn more about what a 9 Line Medevac call is, how to call it in, details on what each line means, and 2 real world examples.