There is a reason why Special Forces soldiers are called ‘elite’ troops.

That’s because few can pass the rigorous mental and physical standards it takes to become a Special Forces operator.

Among the most distinguished and well-known of the US Military’s elite Special Forces are the Navy’s Special Warfare Operators; known to most as ‘Navy SEALs’.

They take on some of the Navy’s most sensitive intelligence gathering and small squad tactical missions.

Intro To The Navy SEAL Rating

Often times they are just a breath away from the enemy and their missions are so clandestine that reinforcements if they get in trouble, are rarely an option.

They are thought of so highly by military decision-makers, that they were chosen over other military branches Special Forces to be the ones to take down notorious terrorist Osama Bin Laden in 2011.

Navy Special Warfare Operators have to be equally at home in the water, on land, and in the air.

SEAL is the acronym for this very thing as it stands for ‘SEa, Air, and Land’.

Just the rigors of being accepted as a SEAL candidate is too much for many, let alone going through the actual training it takes to become a Navy Special Warfare Operator (SO).

The intense daily training and constant mission preparation they go through are reflected in their motto ‘The Only Easy Day Was Yesterday’.

Read on if you think you have the physical stamina, mental determination, and courage it takes to become a Navy SEAL.

Many think that Navy Seals are direct descendants of the Navy’s WWII underwater demolition teams.

While this is true tactics wise, their origin actually can be traced back even further than that.

They were born from what became known as Amphibious Scouts and Raiders in 1942.

These brave men were tasked with gathering intelligence on potential beach landing spots in advance of landing Allied troops during WWII.

Many asked to volunteer were former amateur and professional athletes because the military recognized the importance that these special troops be extremely physically fit.

Among the first 10 volunteers to train at the school established in 1942 was Phil Bucklew, who is now considered to be the ‘Father of U.S. Naval Special Warfare’.

In 1943, further training was to include the use of explosives and led to the formation of Navy Combat Demolition Teams (UDT).

Lt. Commander Draper L. Kauffman, ‘The Father of Naval Combat Demolition’, was in charge of setting up this school.

After playing key roles in successful Allied Forces landings in Northern Africa and Italy, Navy Combat Demolition Teams were tasked with an even more critical role in the D-Day invasions in Normandy, France.

They were charged with blowing up obstacles that impeded landing craft and placing explosives to be used to breach the beachhead.

Despite having over half of their numbers killed or wounded, the Navy Combat Demolition Teams at Omaha Beach managed to plant explosives that blew 8 full and 2 partial gaps in the German lines.

Since that time, Navy Special Warfare Operators working under one name or another, have been a part of every major conflict the United States has played a role in.

To become a Navy Special Warfare Operator one has to be extremely physically and mentally fit to serve.

Here are the requirements that one must meet to qualify to enter Navy SEAL pipeline training.

Here is what it takes to pass the Navy SEAL physical screening test: 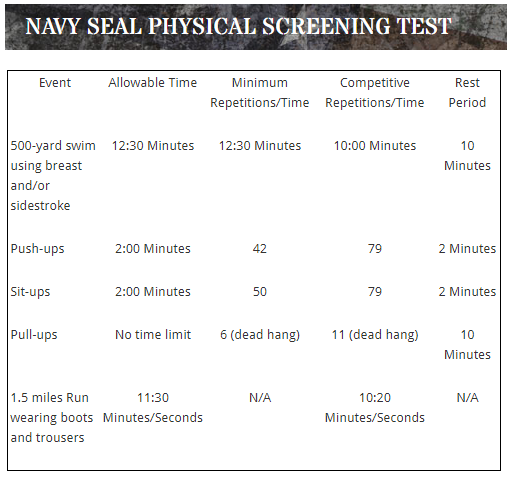 To say that training to become a Navy SEAL is long, hard and challenging is putting it mildly.

It’s a yearlong endeavor that will definitely challenge anyone’s mental and physical limits.

It will also teach those who want to become a member of this elite fighting force how to stay cool under pressure and adapt to any hostile environment they find themselves in.

Both enlisted and officer SEAL candidates train side by side and there is no privilege that comes with rank.

This is mostly a course that introduces what it’s like to be a Navy SEAL to a new recruit.

It involves a lot of physical training and mental testing to see if a new recruit has what it takes to successfully navigate through the Navy Special Warfare Operators training pipeline.

It’s more of a screening phase for potential Navy SEALS than it is an actual training course.

This is a pass or fail only physical fitness test.

In this case, ‘modified’ means it gets even harder than the initial Physical Screening Test.

Fail and you will not be given an opportunity to enter the Navy Special Operations Warfare training pipeline.

Fail and you will not be given an opportunity to enter the Navy Special Operations Warfare training pipeline.

This is the precursor course for the famed BUD/S course. It focuses mainly on further conditioning to get ready for the main BUD/S course. A SEAL candidate will also receive education on the history and traditions of Navy SEALS

Here is the course (or A school) that everyone talks about. It definitely is the real deal when it comes to Navy SEAL training. It will put every SEAL candidate through their paces as it pushes them to their mental and physical limits.

This is especially true of the first 4 weeks of the course. Here future Navy SEALS learn the value of teamwork, perseverance, and humility.

The 4th week of this stage of training is known as ‘Hell Week.

Its 5 straight days of exhaustive physical and mental stress where a SEAL candidate averages 4 hours of sleep a night.

This week is what makes or breaks a large percentage of aspiring Navy Special Warfare Operators.

Once past hell week training gets somewhat less physical and stressful but don’t mistake this as meaning it gets much easier because there will still be plenty of physical conditioning.

There will also be an introduction to demolitions, SEAL communication channels, and hydrographic reconnaissance.

Although Navy Special Warfare Operators are most at home in the water, they also have to jump out of planes or repel down from helicopters at times too.

That is exactly what they will learn to do in this segment of their training.

Chances are if a SEAL recruit has made it this far they have what it takes to be a Navy Special Warfare Operator.

During this course, a SEAL recruit will learn the core tactical knowledge that it takes to as a member of a SEAL platoon.

If they get in trouble, will consist of such things as small unit tactics, advanced demolitions, land navigation skills, all-weather training, basic field medicine, and maritime operation basics.

SEAL recruits will also go through special SERE (survival, evasion, resistance, escape) training during this phase of the training pipeline.

That’s why after SEAL Qualification Training there is a very good chance that any Navy Special Warfare Operator will get more specialized training aimed at their specific mission.

This could be anything from becoming a sniper to learning advanced combat casualty care.

More on Navy SEAL training can be seen on the below YouTube video:

Although their missions are separate and distinct, Navy SEALS and Navy SWCC go through very similar types of special warfare training.

Let me be clear about this…the overall training to become a SEAL vs. a SWCC is very, VERY different.

Becoming a SEAL is WAY harder, as we noted in the above section on training.

Think of SWCC troops as kind of the taxi service for Navy SEALS and other Special Forces personnel that need a lift onshore.

They are experts when it comes to inserting and extracting Special Forces units.

These elite fighting men are most comfortable when working around coastal areas and rivers.

They use a variety of small watercraft that have a deadly amount of firepower.

SWCC troops also gather coastal intelligence and have been known to go inland on occasion.

They are still among the best Special Forces troops in the American military.

Unlike many other types of Special Forces operators, Navy SEALS tend to prefer to carry just the minimal amount of gear necessary to complete a mission.

This is due to the fact that they like to move fast and be as stealthy as possible while doing so.

Many SEALs when on a mission will only even bring 3 or 4 clips of ammo.

Their training emphasizes to get their missions completed without engaging the enemy head-on to do it.

With that being said, here is the typical battle gear that a Navy Special Warfare Operator outfits themselves with:

This list just scratches the surface of what a Navy Special Warfare Operator may gear up with.

Each mission has special gear that will help improve its chances of success.

Navy SEALS have proven to be invaluable in conducting special operations missions across the globe in times of conflict.

Although this article covered just the basics of what Navy Special Warfare Operators do, the Navy is always coming up with new ways to make use of these Navy warriors’ special skills.

Navy SEALS are by no means just limited to coastal operations either.

Those that enter into Navy Special Warfare Operator training and go on to become full-fledged Navy SEALS become part of a truly distinguished Special Forces brotherhood.