For starters, these Air Force careers allow you to learn a technical skill.

You’ll have the rare opportunity to work on some of the finest military installations, aircraft, and equipment in the world.

Moreover, you’ll earn a consistent salary in a non-combat role while serving the nation.

And, when it comes time to leave the military, mechanical skills gives you an edge transitioning back to civilian life.

There are many employers willing to pay top salary for aircraft and helicopter mechanics which not every military career can offer.

Learn more about the 15 Air Force mechanical jobs worth pursuing.

There is a lot you can do with a mechanical/technical job in the military.

You’ll not only get the special opportunity to serve the country, earn money, but also acquire a technical skill.

For this reason, Air Force mechanical jobs are rewarding even after you leave service since many private employers have a hard time filling these positions.

Air Force mechanics operate on the most advanced aircraft in the world.

Overall, there are more than 30 Air Force mechanical jobs.

However, in this article, we’ve elected to narrow down the list to the 15 most desirable Air Force technical careers.

Accordingly, OMK has provided the AFSC and minimum qualifying scores on the ASVAB for each Air Force mechanical job.

These specialists operate on fighters, strike-fighters, and attack planes and prepare them to be ready at a moment’s notice.

As a result, Tactical Aircraft Mechanics (2A333) are extremely knowledgeable and good at their job.

Fortunately, the Air Force provides the training so long as you meet basic requirements, including scoring higher than 47 on the mechanical portion of the ASVAB.

In general, when planes and helicopters are on the ground, they’re undergoing maintenance.

For this reason, Aerospace Ground Equipment (2A632) technicians are charged with regular maintenance including resolving electrical and hydraulic issues.

Therefore, it doesn’t hurt to have a general knowledge of mechanics, electronics, as well as basic writing diagrams and schematics.

In addition to meeting requirements on both the mechanical and electrical segments of the ASVAB, mechanics must have a high school diploma or GED equivalent.

In fact, all Air Force mechanical jobs require at least a high school diploma or GED, and are open to individuals between the ages 17-39.

Aircraft Structural Maintenance (2A733) technicians are responsible for repairing physical damage on aircraft.

Thus, Structural Maintenance mechanics utilize a variety of methods to get aircraft functional and back up in the air.

Aircraft Structural Maintenance mechanics should have a solid understanding of aviation as well as the construction features of aircraft.

From there, Air Force mechanical jobs divide into separate training programs depending on the aircraft and/or AFSC.

Aircraft Metals Technology (1P031) is the Air Force version of welders and fabricators.

These specialists are responsible for creating and repairing parts essential to flight.

As such, Air Force welders are generally terrific at troubleshooting and making crafty adjustments.

Those interested in the AFSC should have a knowledge of metal repair and fabrication.

Moreover, normal depth perception is required to carry out the duties of the specialty code.

The U.S. Air Force operates aircraft that is remotely controlled, as well.

For this reason, Remotely Piloted Aircraft Mechanics must pass a background investigation before receiving the role.

Also, unlike some Air Force mechanical jobs, these mechanics must have normal color vision.

The Air Force has the unique ability to airlift someone out of a dangerous situation or participate in other special missions.

Consequently, the military branch needs mechanics that can fix airlift and other special mission equipment.

These specialists conduct pre-flight and post-flight inspections to verify everything is in working order.

Air Force Specialty Code 2A5X1 has the traditional requirements, including needing to have normal color vision.

When people think of the Air Force they probably think about fighters and paratroopers.

However, helicopters play just as important role in the Air Force as any other type of aircraft.

Accordingly, becoming a helicopter mechanic (2A532) is easily one of the best Air Force mechanical jobs.

These mechanics learn a specialty while maintaining and keeping helicopters at optimal performance levels.

Impressively, Air Force helicopter mechanics can completely disassemble the aircraft for transport before reassembling at another location.

The traditional requirements apply including needing to pass a national background check.

Air Force helicopter mechanics must have normal color vision as well as perform well on the ASVAB.

As a result, it’s the duty of Missile and Space Facilities Specialists to maintain ICBM launch facilities.

It’s certainly one of the most unique and interesting of all the Air Force mechanical jobs.

They’re one of the many service members in the Air Force working behind the scenes to keep the nation safe.

Air Force Missile and Space System Specialists operate at extreme heights, so make sure you are comfortable with those type of working conditions.

Munitions Systems is another one of the really interesting Air Force mechanical jobs.

It’s the responsibility of Munitions Systems Specialists to assemble and process non-nuclear munitions.

As such, these technicians are usually very careful and display an extraordinary attention to detail.

For starters, recruits must have a valid driver’s license, undergo a background investigation, and display no record of emotional instability or domestic violence.

Lastly, all new recruits are expected to complete the Basic Munitions System Course before starting the military career.

These technicians are tasked with maintaining launch and release of devices on aircraft.

Once again, since you are dealing with weapons and explosives, more requirements are required for the Air Force Specialty Code.

First, the Air Force seeks candidates that have experience loading and unloading munitions in the military.

The candidate cannot have any record of emotional instability (including domestic violence).

And, like many other Air Force mechanical jobs, normal depth perception and color vision is required for the job.

The military branch does maintain and occasionally use nuclear weapons systems.

For this reason, it’s the duty of the Nuclear Weapons Specialist (2W231) to inspect, repair, and store these weapon systems properly.

It’s crucial that Nuclear Weapons Specialists have a high level of attention to detail and are extremely careful with their actions.

The Air Force depends on these specialists for national security which is why there are so many requirements.

First, you’ll need to have normal color vision and depth perception, as well as a valid state driver’s license.

Secondly, the Air Force screens candidates for any record of emotional instability and other records with a Single Scope Background Investigation (SSBI).

Third, recruits must be eligible and screened for the Personnel Reliability Program (PRP) to work in the career field.

HVAC (Heaving, Vent, Air Conditioning and Refrigeration) is a smart career path to consider in the military.

The Air Force has its own team of HVAC technicians which also serves you well after the service contract ends.

In fact, HVAC is one of the fastest growing and emerging technical careers.

The good news is that military branch provides most of the training, so long as you have a basic understanding of HVAC/R system principles, controls, and components.

The reason is these military careers provide a government-issued vehicle as part of the job, making it necessary to have a decent driving record.

The margin for error is little to none for Air Force mechanics.

Perhaps it couldn’t be anymore clear than what Air Force Fuels deals with on a daily basis.

The goal is to correct these problems on ground to prevent serious issues from arising during flight.

Still, it doesn’t hurt to already have an understanding of internal hardware such as valves, lines, and gauges.

The ability to fly without being detected is made possible thanks to the hard work of Low Observable Aircraft Structural Maintenance (2A735).

It’s the expectation of these Air Force mechanics to design, fabricate, and modify unique bonded materials and metals that create a stealth effect.

Pilots trust and rely on these experts to remain undetected when carrying out highly confidential missions.

Last but not least, Aircraft Hydraulic Systems (2A635) is another one of the most rewarding Air Force mechanical jobs.

These mechanics are responsible for checking fluid levels as well as air and gas-pressured devices.

Hydraulic systems are abundant on aircraft and range from landing gear and breaks to flight controls and weapon systems.

The Air Force generally seeks candidates that have knowledge of mechanical principles especially when applied to hydraulic systems.

There are several mechanical jobs in the Air Force that recruits should consider.

Mechanical jobs not only provide an advanced skill / technical trait, but help you serve the country in the process.

Furthermore, the training is provided by the military branch so long as you meet the basic requirements of the Air Force Specialty Code (AFSC).

In general, the qualifications for most Air Force mechanical jobs are not too demanding.

The most important thing is to perform well on the General Technical (GT), Mechanical (M), and Electrical (E) portions of the ASVAB.

However, there are many other mechanical jobs that are still available if that is the case. 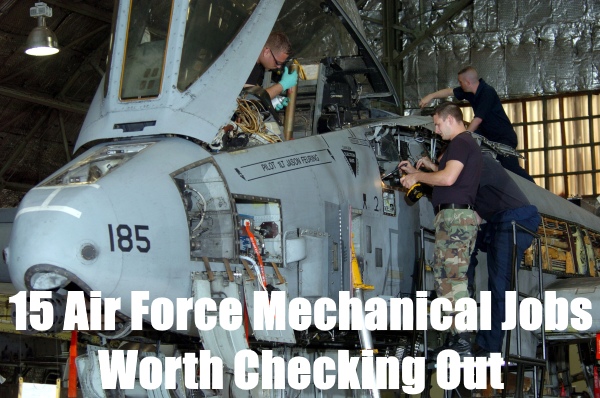 The US Air Force has numerous mechanic jobs that can help you land a good paying job once your service is up.