Air Force Tech School is a major progression in the young life of a cadet.

After completing Basic Military Training, you advance to Air Force Tech School where you learn the tools of your trade while also getting paid.

There are several advantages to joining the Air Force and learning career training at a tech school, compared to the civilian world.

Continue reading to learn more about Air Force Tech School and its locations throughout the United States.

1. What is Air Force Tech School?

After you enlist in the United States Air Force you have several standards and qualifications you need to reach to become officially recognized as an airman.

Several of these qualifications include things like performing well enough on the Armed Services Vocational Aptitude Battery (ASVAB) and meeting physical fitness requirements. These qualifications will be checked at your nearest MEPS station.

Every new recruit in the Air Force regardless of the Specialty Code (or military job) needs to complete boot camp.

Air Force Basic Military Training lasts eight weeks and is what you would expect from a boot camp setting.

You get tested on physical and combat training to determine if you have what it takes for a military lifestyle.

After you complete AFBMT, it is time to prepare for Air Force Tech School.

Air Force Tech School is considered advanced training that is related to your Specialty Code.

Every member of the United States Air Force has a Specialty Code or military job they pursue while serving the military branch.

Air Force Tech School provides you with the tools and resources to train for your new career.

Tech School is different from Basic Military Training (AFBMT) because it is more of a learning environment, kind of like a community college.

In fact, you earn college credits while you are at Tech School and can continue to work on a degree while you progress in rank and expertise.

Consequently, the learning environment is a combination of classroom studies and field training.

Airmen also have more freedom at Tech School when it comes to personal liberties.

New AF recruits get weekends off as they progress through Tech School and other special privileges.

It is important to take AF Tech School seriously as it is your one opportunity to master a new craft and become as effective at your Specialty Code as possible.

It is important to take into account the phases because they come with different privileges.

Phase One begins the first day you arrive for tech school.

Meanwhile, Phase Three is toward the end of training and concludes once you graduate and receive your first permanent duty assignment.

The structure of Phase One is comparable to Basic Military Training where a lot of rules are enforced and recruits have very few privileges.

For example, you must remain on base at all times.

You also must follow a curfew and cannot consume any alcohol, even if you are of legal age.

Recruits cannot use a TV or stereo yet are allowed a personal electronic device (i.e. smartphone) inside the dormitory but only during non-duty hours.

Most recruits attain the level after 14 days of Phase One assuming they don’t have any disciplinary actions, which might delay progress to Phase Two.

During this phase, you also must follow a curfew and receive room inspections.

However, you can now consume alcohol (assuming you are of legal age) and can also operate a private motor vehicle during after duty hours.

Airmen in Phase Two are expected to follow, promote, and encourage all recruits to adhere to Air Force standards.

Airmen are expected to serve as a role model and leader for newer recruits.

Therefore, the Air Force provides less supervision and only performs random spot-checks to make sure you are following the rules.

There are fewer restrictions and the hours of curfew also get extended.

Once you complete Tech School, you graduate from the program and receive your first permanent duty assignment.

Air Force Tech School varies in length based on the Specialty Code.

The majority of training is conducted at one of four primary Air Force Tech School locations in the United States:

There are other secondary training locations (more information, below).

Where and when you attend Air Force Tech School is not always set in stone.

The Air Force is a little different from other military branches in that recruits have some leverage and say in where they would like to train as well as get stationed after graduation.

The USAF will take into account your wishes as well as examine the current needs before assigning a new duty station.

Your duration of time spent at tech school depends on the Specialty Code.

It can last anywhere from six to 72 weeks depending on the military job.

Ironically enough, many of the Specialty Codes in the Air Force also receive tech school training at Lackland AFB.

The other three primary locations include Goodfellow AFB, Sheppard AFB, and Keesler AFB.

The other Air Force Tech School training locations include:

The base was built in 1940 and is one of the most well known in the Air Force.

Keesler AFB in Mississippi is home to the 81st Training Wing as well as the 2nd Air Force, 403rd Wing.

The Air Force Base not only trains members of its own branch but also recruits of the Army, Coast Guard, Marine Corps, and Navy.

Lackland AFB is part of the Joint Base San Antonio.

In addition to serving as the only entry processing station for Basic Military Training, it also provides several tech schools.

Sheppard AFB is another legendary base that dates to the 1940s.

It is one of the four primary tech schools in the Air Force; however additional training sometimes takes place outside one of these bases.

Here are some of the most commonly asked questions about Air Force Tech School:

6. How long is tech school in the Air Force?

The length of Air Force Tech School depends on the Specialty Code or military job.

Therefore, tech school in the Air Force can last anywhere from six to 72 weeks.

After you complete a series of tests known as the Armed Services Vocational Aptitude Battery (ASVAB), you will know what Air Force jobs you qualify for in the military branch.

Every Specialty Code has a series of requirements including mandatory tech school training which varies in length.

For example, recruits in health management only attend tech school for 36 days, while recruits in cybersecurity need to spend 50 days in training.

Furthermore, you also get paid and receive all the standard benefits of other service members in the Air Force.

7. Do you get paid while attending tech school?

There are many benefits to joining the military with one of the most important being a free education.

The Air Force likes to mention that attending civilian trade schools for a similar occupation could cost you upwards of $35,000, before housing and food costs.

The pay is determined by your military rank, which for most new recruits is either E-1 (Basic Airman) or E-2 (Airman).

You also receive all the benefits of the Air Force including health insurance, housing stipends, food allowance, and other perks.

8. Can you live off base while at tech school?

No, Airmen are required to live on the base during tech school.

It is especially important for Phase One recruits, when privileges are limited, including the ability to leave the base at any time.

During Phase Two and Phase Three you do receive more privileges, including the opportunity to leave the base on weekends.

Airmen may have the option to live outside the base dormitory.

However, it is fairly rare since the military branch does not provide any housing assistance for airmen that wish to live off the base.

9. Can my girlfriend or boyfriend live on base with me during tech school?

The USAF only recognizes married partners as dependents and will not assign you with family housing unless you’re married. You may not have guests living with you in on-base dorms.

10. Can you leave base during Air Force Tech School?

The first two weeks of tech school in USAF are much like basic, with few extra privileges. You must remain on base during this Phase One of training.

11. What happens if you fail tech school?

If you fail tests during tech school, you may be assigned with extra study to prepare for retesting. If you fail the course entirely, you could be asked to retrain in a different specialty or discharged from the Air Force.

12. What happens after tech school?

Most Airmen that graduate from Air Force Tech School have the opportunity to request leave prior to reporting to their first permanent duty station.

The amount of leave is usually 10 days.

Airmen that have no accrued enough leave can request “advanced leave” to borrow from future days.

It does “leave you in the hole” but is preferred by many airmen to receive a short-term break prior to their first permanent duty assignment.

The only exception is for airmen that attend tech school during the holidays.

Those that already went on a Holiday Exodus during Christmas may not receive additional leave after completing tech school.

13. What’s the shortest tech school in the Air Force?

Some military careers in the Air Force only require six weeks of training.

These include Specialty Codes like Knowledge Operations Management (3D0X1) which requires approximately 37 days of tech school.

Other short term tech schools are for military jobs like personnel and health services management.

14. Can I bring my phone to tech school?

Yes, the Air Force allows you to bring your phone to tech school.

It even includes Phase One where recruits have very strict regulations.

But you can only use your phone during off-duty hours and in your dormitory.

If you abuse these privileges the Air Force may take away your phone so exercise caution.

15. Can I have visitors during tech school?

Airmen that are going through Phase One are not allowed visitors, even if they travel to the base.

It is important to make your family aware of this rule to avoid any type of punishment.

However, you can still speak with family members and friends over the phone.

During Phase Two, airmen can leave the base with visitors but must remain in uniform.

Phase Three allows you to not only leave the base but also without wearing your uniform.

However, keep in mind that a chain of command can change your privileges so these rules are not set in stone.

Air Force Tech School is an exciting time in the life of a new recruit.

Air Force Tech School is a combination of classroom learning and field training.

By the time you complete the required training for your Specialty Code, you’ll be ready to join a duty station in the U.S. or overseas.

Keanu C.
Keanu is currently an active duty airman in the United States Air Force. Born and raised in Columbia, Maryland, he's currently a Computer Networks and Cyber-security student at the University of Maryland. Keanu enlisted in the US Air Force in September 2013, and attended the Community College Of The Air Force, graduating with an Associates Degree in Transportation.

He currently resides in Tuscon, Arizona, and has plans to attain a Doctorate in Professional Studies In Cybersecurity. 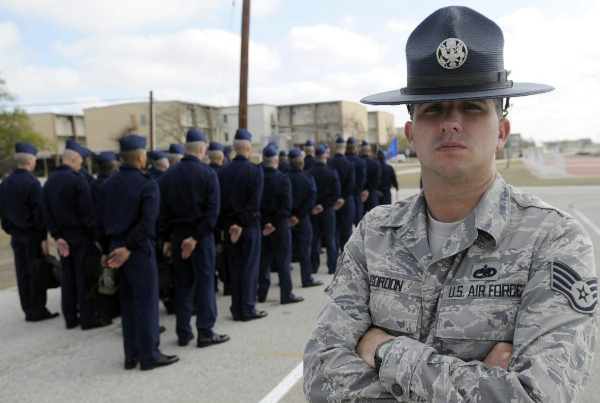