The Bronze Star is a military award that indicates a U.S. service member has performed heroically and/or meritoriously.

It is earned for extraordinary action and service performed in an armed conflict.

This medal was developed and instituted during World War II, and it has been awarded to thousands of recipients since for serving their country.

Here are 7 things to know about this prestigious military award.

Related Article – 12 Most Famous US Marines

1. What Is A Bronze Star Medal?

A Bronze Star Medal is the fourth-highest ranking award that a service member can receive in the U.S. military.

Recipients of this medal have performed a heroic and/or meritorious deed in armed conflict.

Those who have earned this medal are decorated and recognized for their sacrifice, achievement, bravery, and honor in service to the United States.

2. How A Bronze Star Is Earned

Service members earn a Bronze Star medal through a heroic act(s) in the field or through meritorious work.

In addition, these acts must be performed during an armed conflict against an enemy of the U.S.

There are three categories for which the medal is awarded:

The medal can be earned through heroic achievement or heroic service that shows extraordinary bravery and courage during combat operations.

It can also be awarded for those who perform their duties in a meritorious manner in a combat zone, even if they do not directly participate in combat action.

Here are other criteria for actions that determine how a Bronze Star is earned:

A Bronze Star with a “V” denote valor or bravery during combat actions against an enemy force.

There are only three combat military awards, currently, that rank higher than the Bronze Star:

The medal is awarded for acts of heroism or meritorious service which are of a lesser degree than those described by the Silver Star award.

4. History Of The Bronze Star

Reeder was severely injured in Normandy and found himself medically retired from the Army.

Though Colonel Reeder was awarded the Purple Heart, Distinguished Service Cross, and Silver Star when he returned home, he wanted small unit ground commanders to have an award to immediately bestow on ground soldiers in the field.

This would especially apply to those serving in the line of duty for long periods as a reward for acts of heroism and/or dedicated, meritorious service.

Reeder’s proposal for the “Ground Medal” was taken up by General George C. Marshall.

It was signed into order by President Franklin D. Roosevelt as the Bronze Star Medal and the award became part of the military award catalog in 1944.

In addition to establishing the Bronze Star as a military award, the order became a retroactive precedent for service members dating back to the attack on Pearl Harbor.

5. Description Of The Bronze Star

This medal is made of bronze and measures 1.5 inches in diameter, with a raised bronze star in the center whose rays coincide with the larger star.

The Bronze Star itself hangs from a ribbon that is 1  inches wide.

Inscribed on the back of the award is “Heroic or Meritorious Achievement” with space available for engraving the name of the recipient.

If a Bronze Star is awarded with a “V” device, this indicates that any meritorious or heroic acts were performed during combat.

The V device on the award is intended to reflect a recognition of valor among this medal’s recipients.

Other Bronze Star devices indicate the number of conflicts in which the recipient participated and received awards.

They may also denote additional achievements.

These devices can be worn on a ribbon bar or the ribbon of the medal itself.

The Bronze Star, awarded for meritorious service or acts of valor while serving in combat operations, is the ninth-highest military award in order of precedence of overall U.S. military decorations

This includes combat and non-combat awards.

These service stars are sometimes referred to as campaign, battle, or engagement stars.

A service member wearing multiple service stars was likely engaged in multiple operation campaigns or served a specific amount of time for each star.

It is important to distinguish that a service star is not an individual medal, whereas the Bronze Star is.

Service stars are approximately 3/16th of an inch in size and are attached to the ribbon of the respective campaign medal of the recipient.

7. Recipients Of The Bronze Star

The Bronze Star has been awarded to thousands of recipients for valor and achievement.

Service members have received the award during such conflicts as World War II, the Korean War, the Vietnam War, and Operation Iraqi Freedom.

To receive a Bronze Star, a commander must recommend the service member to receive the medal with a citation in their orders.

In unique cases, civilians serving with the U.S. Armed Forces in combat are also eligible for the award.

A civilian reporter and photographer, Joe Galloway, received this medal during the Vietnam War in 1965 for rescuing a wounded soldier under fire.

In addition, author Ernest Hemingway also received the Bronze Star in 1947 when working with troops from Normandy to the Battle of the Bulge. 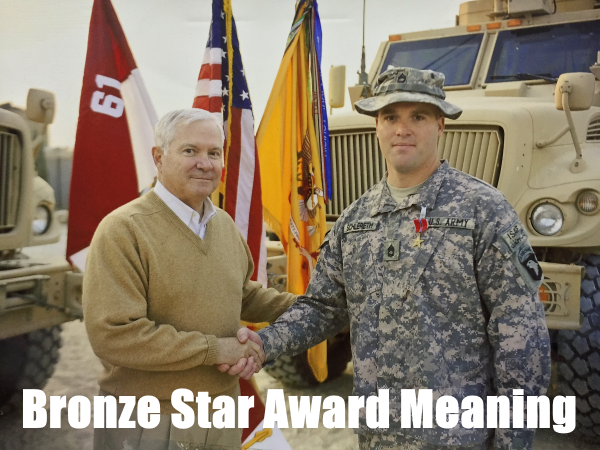 The Bronze Star is the 4th highest award given to a service member that performed a heroic or meritorious deed. Learn more about this military medal here.