If you’re thinking about joining the US military, but previously had a run-in with the law, you might have a few questions.

Every day in the United States, 1,000’s of young men and women are arrested and convicted of countless crimes and misdemeanors that can be detrimental to their future potential military careers.

So, can you join the military if you have a felony?

Well, the short answer is just like with anything else military-related: it depends.  Certain types of felonies, including aggravated assault, rape, 2 or more DUI convictions, drug distribution, and arson, are all examples of the types of felonies that make it impossible for you to join the military.  Other charges, specifically misdemeanors, generally do not provide any sort of problems with military enlistment.

Let’s examine each case specifically and see what the rules and regulations regarding military enlistment are.

Can I join the military if I have a felony conviction?

With that said, it is an uphill battle.

In general, the 5 branches of the military are looking for candidates with a “sound moral character“.

Often, a felony is looked at as a failure to meet that standard.

As discussed earlier, whether or not you can join the military with a felony conviction really depends on several factors.

Let’s discuss some of these individually to get an idea of what is an enlistment killer and what isn’t.

What Your Felony Conviction Was For

There are certain crimes and circumstances that, no matter how you go about it, are just not acceptable to the US military.

For these crimes, there is no waiver process or exceptions.

You simply cannot join the military if you committed these offenses.

The crimes vary depending on the branch of service you’re looking to join, but here’s a short list of some felony offenses that will not receive a waiver:

Again, this all depends on what branch of the military you’re looking to join.

For example, if you’re thinking about joining the Air Force, but have a felony DUI conviction, you likely won’t get in.

However, if you have a DUI on your record, the Marines will take you.

Related Article: Can You Join The Military With A DUI?

If you’re unsure as to whether or not your felony conviction is grounds for dismissal from consideration of joining the military, it’s best to speak with a lawyer or recruiter to get the full details.

Find A Lawyer Near You – https://lawyers.findlaw.com/

What Your Current Legal Status Is

If you are currently on probation or parole for your felony misdemeanor, none of the 5 branches will grant you a waiver.

Additionally, if you’re currently serving a sentence in jail or prison, or are currently facing criminal proceedings, the military will not grant you a waiver.

You have to be completely off of parole/probation, and not legally incarcerated at the time of application.

If you are caught lying on your application, it is immediate ground for dismissal.

With that said, it is possibly for you to have your probation period reduced in order to join the military.

It all depends on the judge presiding over your case, and whether or not he will grant the parole reduction.

Another important consideration is whether or not your felony charge was as an adult or juvenile.

Despite the notion that juvenile records are “expunged”, a military background check will be able to view any and all records as part of their security clearance.

These include both felonys and misdemeanors.

Regardless, felony cases involving juveniles are used in deciding whether or not a candidate can or cannot join on a case-by-case basis.

In some circumstances, it’s actually a way in to the military.

In lieu of a jail or prison sentence, a judge may decide that you can join the military instead, but this does not necessarily mean that the service must take you.

Again, it all depends on the circumstances.

How can I join the military with a felony?

Assuming you haven’t been convicted of one of the exceptions listed above, it is possible.

Joining the Army, Air Force, Marines, or Navy with a felony (like a DUI or drug charge) involves several steps, each of which depends on which branch you’re looking to join.

2. Getting letters of recommendation from character witnesses

3. Going through a “suitability review process”

The Air Force, in particular, can be exceptionally picky about their recruits.

Thus, it can be more difficult to join if you have a felony conviction.

Several of the other branches, specifically the Marines and Army, can lower the standard during times of war.

They have (and continue to) accept candidates with less-than-stellar records, depending on the countries current war-time readiness levels.

Can I Join The Military With A Misdemeanor?

Unlike felony convictions, having a misdemeanor conviction provide a much easier path to enlistment.

Again, it all depends on the circumstances, as well as the branch of the military you’re looking to join.

Just like with felonies, however, the 5 branches of the military are all looking for candidates with “sound moral character”.

Some of the misdemeanor convictions that do require a waiver include:

And minor convictions that do not require a waiver include:

Whatever your reasons for joining the military are, having a felony hanging over your head certainly isn’t easy.

If you’re concerned about your felony conviction ruining your chances of joining the military, know that there is hope.

There are too many factors involved that affect the outcome, but contacting a recruiter is your best bet.

In summary, if you have a felony DUI or drug charge, it is possible for you to join the military. 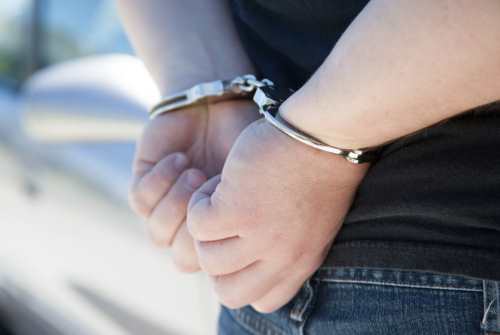 Thinking about joining the military, but worried that your felony conviction will be a problem? Check out our article detailing what felonies might disqualify you from serving in the Army, Navy, Air Force, Marine Corps, or Coast Guard.

23 Replies to “Can You Join The Military With A Felony?”