Joining the military is one of the greatest career aspirations among many young men and women.

However, hardly a day passes without the courtrooms witnessing a few driving under the influence (DUI) cases, with young adults as the main culprits.

However, it can have significant repercussions in your future military career.

So can you join the military with a DUI?

The military is very selective when it comes to picking recruits, as suggested by the various stringent policies found in most branches. Nearly all branches of the military classify DUI as a serious offense, as it is synonymous to substance abuse. For this reason, you may have a hard time joining the military with a DUI.

However, having a DUI conviction record is not the end of your aspirations to join the military. Your admission will depend on a number of factors such as how many DUI offenses you’ve had, the severity of the charges, any corrective actions taken, and at what age the offense was committed.

Related Article: Can You Join The Military With A Felony?

Additionally, different branches have specific criteria and requirements that you must meet to qualify for enlistment.

Jump To A Branch

Can You Join the Army with a DUI?

The abuse of alcohol is incompatible with US Army values. For this reason, it might be hard to qualify for positions in the army.

However, the army is perhaps the most lenient compared to other branches, when it comes to DUI offenses.

This is particularly true if you are a first time offender with no other conviction records related to DUI.

Notably, you may only apply if it’s your first DUI conviction.  If you had 2 DUI’s or more, you might not be able to serve in the US Army.

Related Article – 20 Health Conditions That May Disqualify You From Military

You may also have to meet an army recruiter to initiate a waiver request. Full disclosure is pivotal when requesting a waiver to join the army.

It is important that you disclose information about the incident and indicate any positive actions taken to make changes to your behavior.

Any future DUI misdemeanors will automatically lead to far-reaching consequences, including dismissal from the army.

Based on the information that you provide, the recruiter will be able to judge your character and either approve or reject your waiver request.

After joining, you must serve the army for at least three years before you may be considered for Officer Candidate School.

Can You Join the Navy with a DUI?

Joining the US Navy with a DUI is a long and tedious process. The good news is that you can get approval despite your past DUI conviction.

Just like with the Army, all you have to do is to apply for a waiver.

It’s important to note that the Navy will NOT under any circumstances allow a waiver for more than 2 DUI offenses.

In the Navy, they call these ‘Behind The Wheel’ (BTW) convictions, so it could be a a DUI in a car, boat, or even an airplane.

Nevertheless, before the recruitment officer can consider your application, your last DUI conviction must not be less than one year old from the date of the offense. Importantly, the waiting period of 12 months or 1 year is not waiverable. In addition, you must have completed your sentence, including community service, alcohol abuse classes and any other requirements pertaining to the conviction before you may request for a waiver.

Even though the Navy is lenient on DUI or Behind The Wheel adjudications, it is advisable that you learn from your first mistake and not commit a second offense. Having more than one or two convictions is a sign that your drinking has become a problem and you certainly need help. With this in mind, do not expect to join the navy if you have more than 2 DUI convictions.

Related Article – Can You Join The Military With A GED?

Can You Join the Air Force with a DUI?

The Air Force is more stringent when it comes to DUI offenses.

In any case, if the applicant cannot be trusted with driving a vehicle, it would be more difficult to trust them with flying an air force jet or even working on one.

Essentially, every time you attempt to drive a vehicle while under the influence not only puts your life at risk but also jeopardizes the safety of those around you. The risk is heightened when flying a plane.

For this reason, it is highly unlikely that your application to join the air force will be approved.

What is more discouraging to DUI offenders is that the air force has over 10,000 applications waiting for approval.

Out of these, a high number of applicants are of impeccable behavior.

This means that a DUI offender might have a hard time getting onto the waiting list, let alone finding a slot in the air force.

Nevertheless, in some instances, you may receive a waiver if you get hold of a high-ranking air force recruiter.

However, you have to be clean for at least 5 years after your last DUI conviction.

In addition, your application will still have to go through a flight chief, a squadron commander and a wing commander for approval. From the look of things, it is almost impossible to join the air force with a DUI.

Related Article: Can You Join The Military With ADD/ADHD?

Can You Join the Marines with a DUI?

The United States Marine Corps is undoubtedly the most popular branch of the military in terms of pay and benefits.

The US Marine Corps is actually one of the more prestigious branches of the US Military as well.

For these reasons, it is not surprising that most people often opt for this branch when seeking to pursue a career in the military.

On the flip side, the Marines only accept a handful of recruits every year.

For this reason, the recruitment process is normally very competitive, and it would get much harder if you already have a DUI conviction hanging over your head.

Just like any other military service, the U.S. Marine Corps only enlist people with high moral standards and qualifications.

With this in mind, it would almost take a miracle for you to make the list.

However, you may apply for a waiver so long as you are not under any form of judicial restraint within the past one year.

In addition, you must provide full disclosure about the offense in question for the recruitment office to consider your application.

Nevertheless, the processing of your waiver request might take ages, especially if you have a DUI record.

Even if your request is approved, you must go through drug and alcohol tests to ascertain your sobriety.

Can You Join the Coast Guard with a DUI?

The US Coast Guard is the strictest of all the branches of the military when it comes to recruitment.

The process of enlistment is extremely competitive, and the recruiters carry out stringent background checks to determine who qualifies for any slots in the coast guard service.

As if that is not enough, you must meet very high moral standards for you to qualify for a position in the Coast Guard Service.

This means that the chances for admission are very slim if you have a DUI conviction record.

Apparently, DUI offenders must remain sober with no other convictions for at least 5 years before you can apply for a waiver request.

In some instances, it might take even longer before a recruiter looks at your application.

Interestingly, joining a pre-trial diversion program may help expunge your DUI record before applying for enlistment.

However, you will still have a misdemeanor record, which may still hamper your chances for success.

In addition, most waiver requests are handled on a case by case basis, meaning that the recruiters will nevertheless find out about your attempt to water down your DUI record.

As mentioned before, the military classifies DUI as a very serious offense. For this single reason, your application to join the military may not even pass the first step of the recruiting process.

However, this does not mean that you should lie about your past record on your application.

Giving false information is not only a federal crime, but also reason enough for disqualification. The best you could do is to consult a recruiter for guidance on how to handle your situation.

The recruiter will offer meaningful insights that may increase your chances of success.

It is important to note that your behavior will be under scrutiny from the moment you apply to join the military. With this in mind, it is prudent that you conduct yourself to the highest standards of diligence to enhance your chances of approval. Essentially, you must be at your best behavior from the moment you submit your application onwards.

If the DUI conviction happened years ago, it is highly likely that you might join the military eventually. However, you may still need to apply for a waiver or seek letters of recommendation from a probation officer in case your sentence included community service. 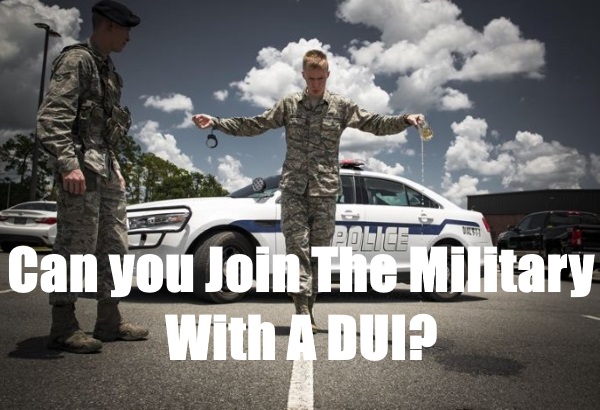 Learn more about the DUI policy for the US Army, Navy, Air Force, Marine Corps, and Coast Guard. The bottom line is, you can join the military if you've had a DUI.