Back in the day, joining the military was a simple and straightforward process. The requirements to join the service were relatively lenient, especially during wartime.

Nevertheless, this is no longer the case. Things have changed and the requirements have become tougher and stricter.

We have previously addressed several conditions, such as ADHD, Asthma, and Flat Feet, all of which can affect your chances of getting in to the military.

One topic we haven’t discussed until now is Autism.

If you were diagnosed with autism during your childhood, your condition might be a red flag for military disqualification. The good news is that you can still join, but you have to pass through a number of significant hurdles before you can make it into the military.

So can you join the military with autism?

Like most things in the military, the answer to this question is “it depends”.  It depends on the military branch you’re looking to join, what type of autism you’ve been diagnosed with, and what kinds of autism symptoms you’re displaying.

Let’s first dive in to the various types of autism, and then we’ll get to the specific policies for each military branch.

First, you need to understand the type of autism that you have, as it will determine your eligibility to join the military.

Autism is a condition that impairs the ability to interact and communicate with others. The disorder is characterized by rigid and repetitive patterns or behaviors that affect social interaction and language or communication skills.

The diagnosis of autistic and pervasive developmental disorders normally occurs during childhood, while that of Asperger syndrome occurs when one is in their teens or adulthood. (Source)

Out of these three autism spectrums, people with Asperger syndrome or high functioning autism are more likely to get enlistment.

Related Article: Can You Join The Military With That? 20 Potential Medical Disqualifiers

Increased chance of enlistment with high functioning autism is due to the fact that those falling in that category do not have obvious symptoms and display a higher level of cognitive ability than other people with autism do.

Nevertheless, you will still need to disclose your condition to the recruiter or medical examiner, and apply for an Asperger’s military waiver.

In addition, different branches of the military have specific requirements for applicants with autism. Here is a breakdown of what you need to know before submitting your application.

Can You Join the Army if you have Autism?

If you have autism, getting into the Army is much easier than enlisting with other branches of the military.

The Army is always under intense pressure to recruit to meet the demand for personnel in various bases around the world. For this reason, it is not surprising that you may join this branch of the military even if you have autism.

Apparently, the Army is somewhat lenient when it comes to handling applicants who have various medical conditions.

Moreover, autism is not necessarily a disqualifier for applicants joining the Army as compared to other disorders.

However, your chances of enlistment will depend on the spectrum of the disorder.

If you have PDD or autistic disorder, the chances of joining the armed forces are extremely limited, considering the fact that these particular spectrums might affect your work.

Nonetheless, things are a little bit different for people with Asperger autism since the condition is mild with no significant symptoms.

In addition, Army recruiters are often looking for bright, industrious recruits, and applicants with Aspergers often prove to fit the bill with their high IQ.

Even so, you might still need to apply for a military autism waiver.

The good news is that the probability of receiving a waiver a much higher in the army than any other branch of the military.

Can You Join the Navy if you have Autism?

The Navy is another branch of the military that has moderate policies as far as accepting autistics is concerned.

In order to join the Navy with autism, you first need to visit a specialist to determine the spectrum of the condition. The medical examiner will be able to discern whether your condition can affect your productivity at work or not.

Consulting a specialist before going through the recruitment process is important in view of the fact that various autism spectrums are disqualifying factors in the Navy.

Much like the Army, people with Asperger’s syndrome have the upper hand when it comes to joining the Navy.

As it is the norm with most recruitment processes, all potential recruits must undergo testing at the Military Entrance Processing Station (aka MEPS).

Here, you have to disclose to the recruiter about your condition and submit relevant documents to prove that you meet high mental, moral and medical standards despite your condition.

However, your diagnosis might first go through re-evaluation to determine your eligibility.

In addition, the re-evaluation report must indicate sufficient proof that your condition does not affect or interfere with your daily functioning.

You may also need to apply for a waiver, which might be determined on a case-by-case basis if the recruiter realizes that you have something to offer the nation.

Can You Join the Air Force if you have Autism?

Joining the Air Force might be a little bit tougher for applicants who have autism. The main reason behind this is that the Air Force requires higher entry test scores than most of the other branches.

In addition, you must have excellent social and communication skills to join the Air Force. The cold truth is that these skills are often rare in people with autism.

Nevertheless, the Air Force may allow you in if you can prove that you have outlived the condition over the years and that autism is not a hindrance in your daily life.

In addition, you must not be under any medications for at least one year before submitting your application.

However, that is not all… the Air Force may only enlist you if you have a special skill set that is urgently required.

It will also depend on whether they need more personnel or not. If the former is true, then you are likely to get a waiver if your condition does not display significant symptoms that may hamper operations.

Can You Join the Marines if you have Autism?

The United States Marine Corps is one of the most selective branches of the military as far as recruitment is concerned.

In addition, the fact that the Marines is the second smallest branch of the military branch after the Coast Guard further makes it harder for aspiring recruits to join.

Therefore, you might face an uphill task trying to join the Marines if you have autism or any other medical condition.

What is more discouraging is that waivers are hard to come by in the Marines.

This is because recruiters in the Marines normally regard applying for waivers as a professional risk, especially if it involves handling a case of autism or any other medical disorder.

For this reason, they might not process or approve your request unless there is a shortfall that the Corps is trying to overcome. In the unlikely event that you get a waiver, you may have to serve in a special r““““eserve unit rather than active units.

Can You Join the Coast Guard if you have Autism?

It’s not surprising that the recruitment process for Coast Guard officers is extremely competitive and selective, given it’s the smallest military branch.

You have to go through a rigorous assessment process before your application can even be considered in the first place.

The process gets even harder if you have a developmental disorder like autism.

However, like any other branch of the military, your eligibility to join the coast guard depends on the severity of the condition.

Apparently, if your autism is mild, then you can successfully apply for a waiver.

Nonetheless, a medical clearance is required to gain a chance of obtaining a waiver request.

Autism is a life-long condition that does not have a cure.

However, this does not necessarily disqualify you from serving in the military. It all depends on the range of the disorder.

If you can cope well in neurotypical environments without displaying significant evidence of autistic symptoms, then you can easily join any military branch of your choice.

Interestingly, many people with autism have managed to secure enlistment in the past even without disclosing their condition or applying for a military autism waiver.

This does not mean that you should lie about your condition, but it would be more logical if you do not disclose your health status to increase your chances of recruitment. Bear in mind that if you do not get a medical waiver and your condition is later discovered, you could be dishonorably discharged for fraudulent enlistment.

In any case, autism is very hard to diagnose, meaning that the military medical examiners will also have a hard time testing for the condition.

Nevertheless, the biggest question you should ask yourself is whether you are ready to handle the rigors the military requires with your condition.

Military life is hectic, and it involves taking orders, being loud and responsive – traits that most autistics loathe.

In the same breath, various studies suggest that autistic people tend to be significant assets in combat thanks to their ability to focus on the task at hand.

For this reason, your application to join the military may be granted despite your condition.

If you are able to cope with military life comfortably, then there is no reason why you should not give it a shot. 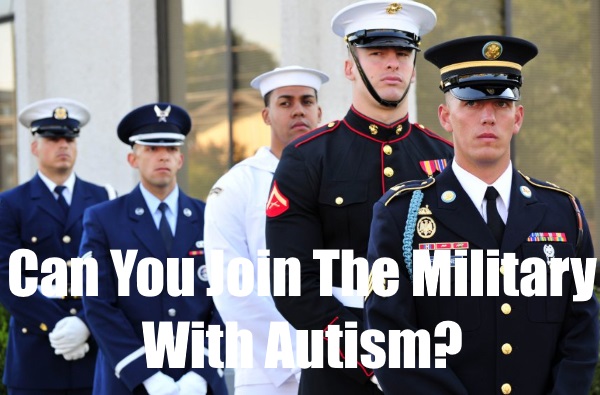 Find out if you can join the military if you have autism. Includes the official policy for the Army, Navy, Air Force, Marine Corps, and Coast Guard.