When someone is released from their contract to serve in the military and their service has come to an end, they are considered to be discharged.

This is different from a military retirement, although many civilians believe it is the same thing.

There are several different types of military discharge, and the one you receive can have a profound effect on your ability to receive veteran’s benefits or find employment within the government.

Most people will receive an Honorable Discharge or a General Discharge.

An Honorable Discharge is given to those who met or exceeded the standards of conduct during their time in the military, while a General Discharge might be given to someone who fails to perform their duties.

Some people may even receive an Entry Level Separation (ELS) if someone leaves the military before they’ve completed 180 days of service.

This type of discharge can happen for medical reasons or other circumstances beyond the individual’s control.

It’s neither good nor bad, although it can prevent people from being classified as a veteran for state or military benefits.

Throughout this article, we’ll be talking all things Dishonorable Discharge.

This includes a full definition of what it is, the reasons why you’d get one, its consequences, and 3 examples of a dishonorable discharge.

What Is A Dishonorable Discharge?

Reasons For A Dishonorable Discharge

What Are The Consequences?

What Exactly Is A Dishonorable Discharge?

In short, a Dishonorable Discharge is the lowest form of discharge one can receive in the military.

It is a punitive separation that happens as a result of doing something really bad, like rape, desertion, or even murder.

With a Dishonorable Discharge, you forfeit all of the typical benefits you would received from your military service.

An Honorable Discharge generally provides you with the benefits that come with being a military veteran, and a General Discharge usually won’t affect any future employment prospects.

However, it is possible to receive a Bad Conduct Discharge if you’ve been given a court martial for bad conduct.

A Bad Conduct Discharge is usually preceded by time in military prison and results in almost all military benefits being forfeited.

As bad as this can be, it is far from the worst type of military discharge someone can receive.

That would be a Dishonorable Discharge, which is considered to be the highest level of punishment that military personnel can receive.

A Dishonorable Discharge is reserved for truly reprehensible crimes such as murder, manslaughter, sexual assault, and desertion.

Those who receive a Dishonorable Discharge will lose all of their military benefits and are forbidden from owning firearms as civilians.

They may also find it very difficult to find employment in the civilian sector.

Reasons for a Dishonorable Discharge

There are a few reasons why someone might receive a Dishonorable Discharge, all of which involve crimes that are considered some of the most reprehensible a serviceperson can commit.

For example, a person might be dishonorably discharged if they are Absent Without Leave, or AWOL.

A person is considered to be AWOL if they intentionally leave their post or fail to return to their post.

Someone may also be dishonorably discharged for sedition, which means they attempted to convince other military personnel to disregard orders or may have even been involved in a plot to overthrow the government.

Murder, manslaughter, and sexual assault are also common reasons for a Dishonorable Discharge.

This of course does not apply to combat situations when a loss of life would be considered a casualty of war.

Sexual assault can include anything from unwanted touching to rape.

Basically, any unwanted sexual contact that is forced on another individual is considered sexual assault and can result in a Dishonorable Discharge.

Consequences of a Dishonorable Discharge

A Dishonorable Discharge can only be given by general court martial for charges of serious crimes or reprehensible behavior.

It is very serious and even considered to be shameful in the military.

Not only does it rightly end one’s military service, but it does not mark the end of an individual’s legal troubles.

Since a Dishonorable Discharge is often the result of a serious felony such as rape and murder, the discharged military member might face a prison sentence, fines, and other serious legal consequences that come with such serious charges.

One of the worst parts about receiving a Dishonorable Discharge is that it can affect your life long after your military service has concluded.

A person who was dishonorably discharged from the military typically cannot receive any of the military benefits that they would otherwise be entitled to.

In fact, a Dishonorable Discharge might even disqualify you from ever receiving government benefits, even those you would normally qualify for based on need.

Naturally, all of this would extend to financial aid that might be applied to college tuition, so you would have to pay for any college courses you want to take out of your own pocket.

Not only will you almost certainly be unable to qualify for any government benefits that you would need to survive, but you may have a lot of trouble finding employment with a Dishonorable Discharge on your record.

First of all, you almost certainly will be disqualified from any government jobs.

Second, your Dishonorable Discharge will show up on any background checks that potential employers run on you.

This may not disqualify you from finding employment, but many employers look at a Dishonorable Discharge in the same way that they look at a felony conviction.

You might be able to find an employer who will hire you just like an employer might hire someone who was convicted of a felony, but it will make your job search much more difficult.

On top of all of the legal and financial troubles that a Dishonorable Discharge can bring, you will also almost certainly be shunned by other military personnel.

Being part of the United States Military is normally a badge of honor, something that should make anybody proud long after their service is complete.

That won’t happen if you have a Dishonorable Discharge on your record.

You’ll be seen as a criminal, a traitor, or a deserter depending on the reason for your discharge.

We’ve talked a bit about what kind of conduct can result in a Dishonorable Discharge, but let’s talk about some examples.

First of all, there is the case of Bowe Bergdahl.

Bergdahl is a soldier who was captured in Afghanistan in 2009 by the Taliban.

Although he was held captive from 2009 to 2014, an investigation into his disappearance uncovered evidence that his capture occurred because he had abandoned his post.

According to some witnesses, Bergdahl may have been drunk when he was ambushed and captured by the enemy.

He was sentenced to a Dishonorable Discharge in 2017, although he won’t face prison time.

Another particularly heinous example of a Dishonorable Discharge occurred in 2010 when 23-year old Marine Joshua Kruzik was left to babysit his friend’s 19-month old daughter.

While the girl was in his care, Kruzik beat her to death.

Another fairly well-known example of a Dishonorable Discharge happened to Charles Ng, a Chinese immigrant who came to the United States with a student visa. Despite not being a United States citizen, he joined the Marine Corps using false documents in 1980.

He was later arrested and charged for stealing heavy weaponry and machine guns from the Marine Corps base in Kaneohe Bay, Hawaii.

He later escaped, so the court martial added attempted desertion to his charges.

He received a Dishonorable Discharge and was sentenced to serve 14 years in Leavenworth Federal Penitentiary.

He only served 18 months thanks to a plea bargain. Ng was later convicted of 11 counts of first-degree murder and sentenced to death in 1999.

He has been labeled a serial killer and is currently on death row in San Quentin prison.

What is a dishonorable discharge?

A dishonorable discharge is the lowest form of military discharge one can receive at the end of their military career. In the civilian world, it would be the rough equivalent of getting a felony.

How do you get a dishonorable discharge?

While there are various reasons, the most typical reason one would receive a dishonorable discharge is by committing a reprehensible act. This includes: rape, murder, going ‘AWOL’, and much more.

What happens if you get one?

The consequences of a dishonorable discharge are severe, and can result in a prison sentence, affect future employment, and cause a loss of civil rights.

What are the types of military discharge?

The 8 types of military discharge are: Honorable, General, Other Than Honorable, Bad Conduct, Dishonorable, Entry-level separation, Medical separation, and Separation for Convenience of the Government.

Can I appeal my dishonorable discharge?

While it’s possible, it’s very difficult to do so, and can be very costly in terms of time and money.

As you can see, a Dishonorable Discharge is a serious matter that is akin to being convicted of a felony.

It is considered incredibly shameful to other military personnel, and it will impact your ability to receive any financial assistance or find employment.

It’s also a charge that sticks with you for your entire life.

This is something that should always make you proud, and rightly so.

On the other hand, there are few things that are more shameful than violating the Code in the most despicable ways possible.

Whether it’s because you leave your post and go AWOL or you commit a violent crime against another human being, a Dishonorable Discharge will ruin your life, your military career, and your reputation.

As with any criminal action that can lead to serious legal consequences, this kind of discharge should be avoided at all costs. 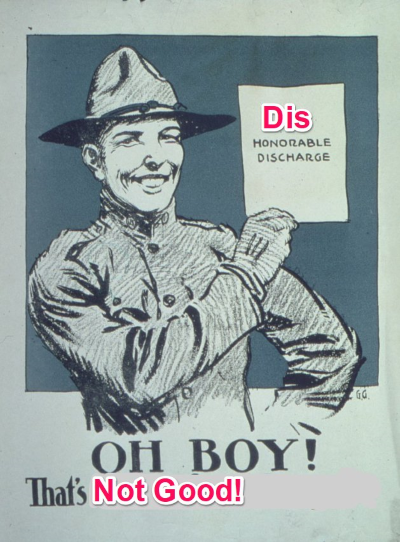 Learn more about dishonorable discharges, including what it is, reasons why you would get one, the consequences of having one, and 3 real world examples.