If you are new to the Army or about to join, you might have heard of Army CQ duty and wonder what it is all about.

CQ means Charge of Quarters in the Army, and it is an around-the-clock shift made up of two members.

Some soldiers do not mind CQ’s 24-hour shifts, but others find it tiresome and irrelevant.

As it happens, there are Army regulations that defined the expectations of Army CQ duty.

#1. Staff Duty Vs. Army CQ Duty: There Is A Difference

In some cases, Staff Duty and Army CQ duty are terms used interchangeably.

However, they are two separate duties.

Staff Duty takes place at the front desk of the unit building, and it is a 24-hour shift.

Army CQ duty is also 24-hours, and it pertains to keeping an eye on the individual barracks.

Typically, the Staff Duty person is of higher rank, typically an E6 or higher.

The CQ is lower in rank. However, that might shift depending on the personnel situation and the unit’s needs.

The Staff Duty NCO is responsible for the soldier on CQ duty.

The duties for Army CQ include securing the barracks and keeping a record of all events that occur during the 24-hour shift.

The Soldier on CQ records the daily activities in the DA Form 1594, which is a staff journal of events.

This form has space to note the time in and out and all messages, incidents, or orders handed down the chain of command.

Also, there is a section to note actions taken during CQ duty.

Furthermore, the soldier on CQ does security checks of the barracks.

In addition to the soldier on CQ duty, there is a runner and an NCO (non commissioned officer) on duty.

The runner is there to relieve the CQ person for eating and going through the security checks.

Essentially, the soldier on CQ duty is responsible for maintaining order in the area and noting the events as they unfold.

After the 24 hour shift, the relief shows up, and the soldier is free for at least 24 hours.

The CQ shifts rotate through the day with two recruits at a time taking on the duty.

Usually, the recruits handle who comes in and out, but they must be careful with who is let into the barracks. Not everyone has permission to enter.

The CQ can open the door, and if the person entering is of a specific rank, the CQ announces the arrival so the rest of the recruits are ready.

One of the recruits on CQ duty must inform the drill instructor of anyone entering or leaving the barracks.

While Army CQ duty is often not a coveted duty, there are several perks.

Also, since the shift is 24 hours, when your relief rolls up in the morning, you have the next 24 hours off.

It is also common that if your CQ duty happens just before your time off, you will find you have an extended amount of time to yourself.

Also, while staying awake for 24 hours is not ideal, it is often better than some of the other assigned duties.

A soldier often realizes CQ duty is a lot better than what everyone else has to do that day.

Speaking of sleep, one of the challenges of CQ duty involves being awake and alert for an entire day.

Although, you can bring things to entertain yourself in the middle of the night when there is not much else going on. Be prepared to fight boredom.

CQ duty is a fact in the Army, and you are likely to find yourself on this 24-hour duty shift at some point.

While on duty, you note activities and follow orders handed down by superiors.

Also, you do security checks.

During this shift, a CQ runner gives you a break for eating and performs the security checks.

There is plenty of downtime on this duty station, so prepare by having something to occupy your time, especially in the middle of the night when not much is happening.

Also, as you fight boredom, remember that you have 24 hours off once your relief shows up. 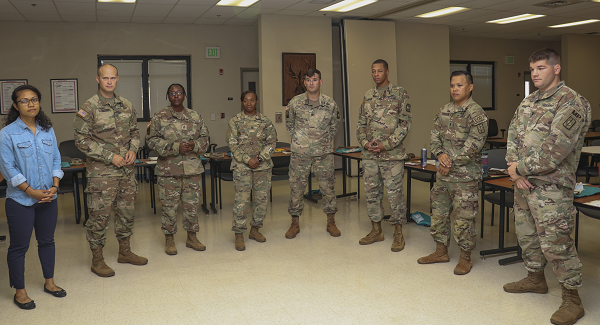 What is CQ Duty in the Army? Learn more about what it is, when it's used, and all of the good and bad things about it.