Washington State is home to 8 military bases. These bases are run by the Air Force, Air National Guard, Navy, and Coast Guard, with one base ran jointly by the Air Force and Army.

The military bases in Washington have varying missions, including combat, aviation, support, training, intelligence, and more.

Their histories vary as well, with one base starting in 1917 and another not having been put together until 2004.

Below, you’ll find a brief rundown of each of the military bases in Washington. If you’d like to learn more about any specific base, follow the link to its official site (also provided below).

Overall Mission: Fairchild Air Force Base as a whole contains many different missions.

Their largest mission is Air Refueling for both Active Duty and National Guard units.

The base is also home to the Air Force Survival, Evasion, Resistance, and Escape (aka SERE) School and the Joint Personnel Recovery Agency.

Its main duty is performing Intelligence, Surveillance, and Reconnaissance missions, while it also works in Combat Communications, Weather, Network Warfare, and more.

Overall Mission: This base is where all Electronic Attack Squadrons in the Navy are stationed.

Maritime Patrol and Recon Squadrons also make up a large part of this base’s mission.

The aircraft flown here include the EA-18G Growler, the P-3 Poseidon, the P-3 Orion, and the EP-3E Aries.

As a whole, the base aims to provide the highest quality services and facilities to local naval aviation.

Overall Mission: This station is located on a convenient deep-water port, one of only two navy deepwater ports on the west coast.

From this port, the base and its tenant units provide shore station support to US Navy and Coast Guard missions.

Overall Mission: This base is the largest Navy base in the Northwest and the 3rd largest in the country.

As a result, it’s also one of the biggest military bases in Washington state as well.

Because of this, their missions depend on the unit more so than the base.

Some of their best-known missions relate to logistics, maintenance, submarine, aircraft carriers, and engineering.

Overall Mission: This base is the Navy’s only West Coast deep-water ammunitions port.

Its main mission is the receipt, storage, and issue of munitions at Indian Island.

They aim to provide the finest logistics and ordnance support to their Fleet and to the Department of Defense.

Overall Mission: This is a joint base that serves both the Army and the Air Force.

The tenant units have varying missions, though the base as a whole focuses on state-of-the-art trainings and providing mobilization and deployment capable units when necessary.

The base is also home to the Madigan Army Medical Center.

At close to 87,000 acres in size, it also happens to be the largest military base in Washington state. 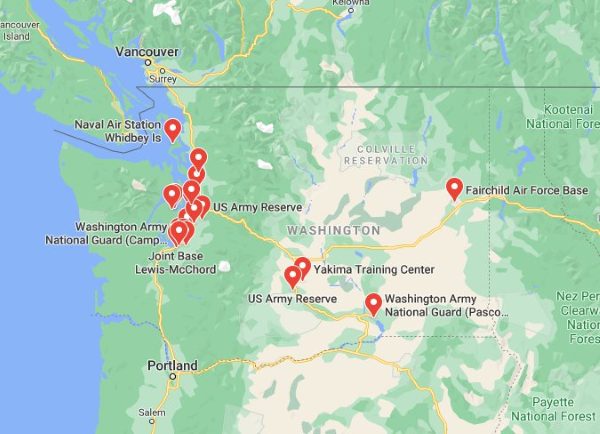 Washington state has a total of 8 military bases. These include bases for the Army, Navy, Air Force, and Coast Guard, but not the Marine Corps.