While America has a substantial number of military bases on the Homefront, there are also many bases abroad that help ensure defense and combat readiness of the nation.

In particular, the wide array of allied nations in Europe and location across the Atlantic help to enforce military dominance across the globe.

Allied nations such as Germany and NATO nations all help to support and house American troops throughout Europe.

Many American troops are based on International bases for allied forces, but we want to focus on the main bases that America has a larger stake in.

To maintain the international dominance that America has, it need the help of some allied nations to let us borrow their land to help both parties thrive.

Here are the US Military bases in Europe that are currently active.

US Army Bases in Europe

Overall Mission: USAG Ansbach is one of the primary US bases in Germany that is stationed for combat readiness when it is necessary.

Part of the larger set of bases in Germany, Ansbach is serving to support any troops located in Europe and makes sure they are ready for combat.

The base supports the needs of service members and their families to help provide a high standard of living of military units in Germany.

Overall Mission: USAG Bavaria was designed to help support combat readiness and to ensure community security for forces in Europe.

A part of Installation Command, USAG Bavaria I plays a vital role in supporting the military community in Germany as well as the rest of continental Europe.

This base also supports a wide array of training functions as it helps to keep units fresh among a network of other installations in the Bavaria region of Germany.

Overall Mission: Considered to be the premier strategic readiness installation in Europe, USAG Rhineland-Pfalz helps to provide mobilization and unit readiness support to the active community.

With a wide array of diverse military communities, this garrison is able to offer troops and their families all the support and comfort they need when in Germany.

The garrison utilizes the resources from each of its smaller able to form a powerful collective that gives army troops and their community the training, protection, and support they could need at any given moment.

Overall Mission: Similar to many of its German installations, USAG Stuttgart is home to a wide array of military and civilian personnel.

This is a join service military community that is comprised of a number of smaller bases where over 20,000 troops and civilians work together.

The base acts as a preeminent command and control platform for any potential operations that would need the full support of local troops.

Overall Mission: USAG Wiesbaden helps lay the foundation for service members stationed in Europe to help them stay ready and capable if the time comes for action.

Once of the premier garrisons in Europe, this network of installations works to support all of those currently serving and those who they call family.

This garrison is also home to a diverse ray of units that all work and train together to ensure the nation is ready for whatever threats may arise in the future.

Overall Mission: USAG Benelux is a joint operations garrison that is headquartered in Belgium with various operations being seen through across Europe.

As a multi-national garrison, this base is able to consolidate what was once a wide array of organizations into once centralized command for greater efficiency.

USAG Benelux helps to provide an Army presence across Europe and allows NATO allies to get the help they need when they need it most.

Overall Mission: USAG Italy helps to ensure troops and civilian operatives area bale to stay safe and move through the region without any issues.

Being one of the major USAG support bases, this garrison helps to facilitate a safe and supportive environment for Army units deployed in Italy.

The units of this garrison consist of two Army bases with an additional ammunition supply point that ensures troops in the region have access to whatever they need to be ready for deployment.

Overall Mission: This somewhat infamous air base is the home to a dedicated air wing and houses many aircraft that are designed for airlift and expeditionary force situations.

The base is also home to many facilities that are similar to neighboring German bases that emphasize community and working with civilian partners.

Very recently, Ramstein has been chosen as the future home for the NATO Space Center that will increase its importance dramatically.

Overall Mission: At this joint operations base that helps the USAF and NATO allies operate in Italy, this base is home to the 31st fighter wing.

The base has the facilities and resources necessary to operate and maintain their fleet of aircraft that are always training to be combat ready.

In addition to USAF fighter jets and pilots, the base is a location where many combat operations abroad are able to be launched from Italian airspace.

Overall Mission: This Air Force Base located in England is the only current point of deployment for US F-15 fighter aircraft and allows them to operate strategically across the world.

In particular, this base has been a primary center for deploying F-15 combat squadrons to middle east location where they are used for strategical combat missions.

This Air Force Base is also one of the primary areas where the European command for the United States is located and helps to deliver strategic capabilities to the other side of the world.

Overall Mission: This AFB was historically designed for large aircraft purposes and is still able to provide th4e space and facilities to assist essential support aircraft in the region.

A diverse array of units are active at this base and include the 100th air refueling wing that helps to keep other aircraft in the air for longer durations during operations.

This base allows for a strategic advantage for Air Force and allies nations as the refueling capabilities this base provides are vital for continuous air superiority in combat theatres.

Overall Mission: With an agreement between the American Navy and Spain, this naval station was founded to help support naval operations in the waters of Europe.

This Naval Station allows for American and NATO affiliated ships to safely come into port and get the necessary maintenance they need for operational readiness.

Three active piers and a diverse array of facilities allow this location to keep any fleet ready for deployment at a moments notice.

Overall Mission: Based alongside a Greek airfield on the island of Crete, this small yet important facility helps to support naval activities in the waters surrounding Greece.

The base is equipped with the necessary facilities and resources to help support Naval forces from the American and allied fleets when they enter the region.

The units stationed here are trained to help maintain the combat readiness of a diverse array of equipment and vehicles that are all vital to superiority in the surrounding waters and skies. 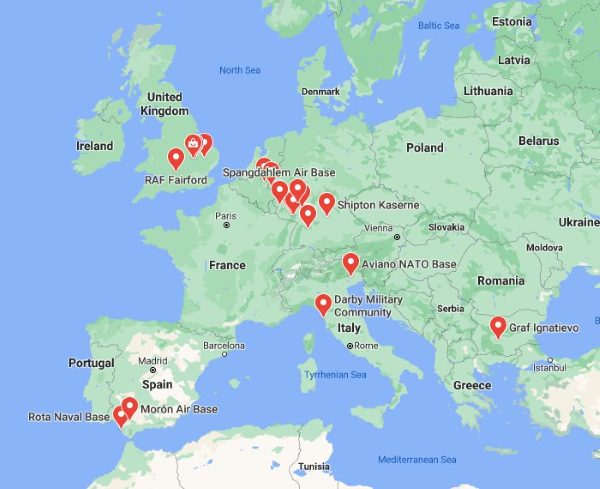 US Military Bases in Europe

Europe is home to 13 major US military bases, including bases for the Army, Navy, and Air Force. Learn more about each base, including when it was founded, its overall mission, and more.