As technology has taken over interpersonal communications through internet messaging and texting, it’s rare to find people who still exchange letters as traditional pen pals.

Yet, receiving letters from “home” has always been a significant part of the U.S. military in terms of documenting history, maintaining morale, and reflecting personal experience.

Though some would consider letter writing to be a lost art, such communication is still important to American military personnel throughout the globe.

If you are interested in becoming a pen pal with someone in the military, here are 8 things you should know.

1. What Is A Military Pen Pal?

A pen pal is someone you haven’t met that you exchange correspondence with, traditionally through hand-written letters.

The idea is to learn about each other and establish a friendship through written communication.

A military pen pal is just like a regular pen pal, yet they are serving in the Armed Forces on active or reserve duty.

A veteran is also someone who can be a military pen pal.

No matter whether the person is serving currently or has in the past, being a pen pal to a military member is a special experience for both parties.

There are many rewarding reasons to become pen pals with a service member or veteran.

Having a pen pal is unique in that you have the opportunity to get to know someone that, theoretically, you have never met.

This type of correspondence allows you to learn things about the other person and their life experiences.

Additionally, it gives you the chance to share things about your life.

Military personnel, in particular, benefit from having pen pals as it helps them remain connected to others and lets them know that people care, especially if they are far from home.

Here are just some reasons to become a military pen pal:

3. Who Can Become A Military Pen Pal?

Almost anyone can become a military pen pal.

If you are interested and willing to positively correspond with someone through letters, then you would likely make a great pen pal for a current service member or veteran.

Here are just some suggestions for those who would make great pen pals for military personnel:

Someone Looking To Join The Military

If you are thinking of joining any branch of the military, becoming a military pen pal is a great way to connect to someone with that experience.

Keep in mind that your pen pal is not meant to be an official guide or mentor for the military.

However, it is a good opportunity to get to know someone who has served and express your appreciation.

Relatives Or Friends Of Service Members Or Military Families

If you are a relative or friend of a service member or military family, chances are that you understand the challenges that come with military life and how gestures of support and gratitude can help.

Becoming a military pen pal to someone can certainly brighten their day and let them know you care.

You can even make writing letters a family project to give back to those who are or have served the nation.

Even the littlest family members can color a picture as their contribution.

Teachers can enhance their students’ writing and communication skills by becoming part of a military pen pal program.

This is especially beneficial for classes that are studying subjects in American history, social studies, and/or civics.

Students can write letters individually, in groups, or as a class.

These letters are sure to be appreciated by military members, and students will certainly appreciate and remember the experience of such a special correspondence.

This is an excellent way for former military members to connect and engage with current military personnel.

In addition to the commonality of understanding what it means to be part of the Armed Forces, veterans can offer unique support, perspective, and friendship for military pen pals.

4. How To Become A Military Pen Pal

Pen pal programs for the military are typically organized by volunteers, private veteran-friendly groups, and others.

The Department of Defense itself does not operate military pen pal programs.

However, some military posts or bases may have local programs through MWR (Morale, Welfare, and Recreation) and family/service member support centers.

Here are some reputable organizations to check out if you wish to become a military pen pal:

Social media is another potential avenue for finding a sign-up group for military pen pals.

However, caution should be used in case of potential scams.

Unfortunately, there are some websites that offer military pen pal programs that are not legitimate.

Many of these are actually scams that target good-hearted people wishing to support the military, including veterans, service members, and their families as well.

Here are some warnings to help you spot these illegitimate programs:

Remember that being a military pen pal is voluntary and straightforward.

Any organization that requests money, private data, or seems otherwise sketchy is likely a scam and should be completely avoided.

6. You Don’t Have To Be A Great Writer

Some people may worry that their writing skills are not good enough, especially if they have never written a letter to someone.

Thankfully, you don’t have to be a good or professional writer to be a great pen pal.

If you are worried about what to say in your initial letters, you can keep them brief.

The best approach is to think of what you would say to someone you have just met.

Tell them a little about yourself and make sure to ask general questions about them as well to show your interest.

If you are concerned about your spelling or grammar, you can look up information online before you write and/or have a friend or family member look it over.

Of course, the longer you are a pen pal, your writing skills and familiarity will grow and develop.

Ultimately, if your letters are sincere, kind, and respectful, they will be enjoyed and greatly appreciated.

7. It’s Important To Be A Patient Pen Pal

Most of us are used to the rapid response time of texts, instant messages, and even emails.

Being a pen pal requires a bit more patience, as letter-writing takes time.

In addition, your military pen pal may be located in a remote region in which the mail service is slower.

Another consideration is that military personnel often work long hours, and those who are deployed in dangerous settings may have few chances and/or resources for letter-writing.

The good news is that the pay-off for being a patient pen pal can be exciting and heart-warming.

First, there is the satisfaction of knowing that your letter is sure to boost your military pen pal’s morale, brighten their day, and be received as a significant gesture of support and care.

Second, when you do receive a letter in the mail as a response, it will be an exciting, interesting, and meaningful experience for you as well.

8. Things To Consider As A Military Pen Pal

Sending a letter to someone who is or was in the military is an act of kindness and appreciation.

Therefore, it’s important to be respectful not just in your written tone, but in the content of your letter as well.

For example, subjects such as politics, religion, sensitive topics, or any other potentially divisive material are not appropriate to include in a pen pal letter.

In addition, revealing deeply personal information or stories should be avoided.

The best way to approach being a military pen pal is with thoughtfulness, respect, and good manners.

That way, it’s a positive experience for everyone. 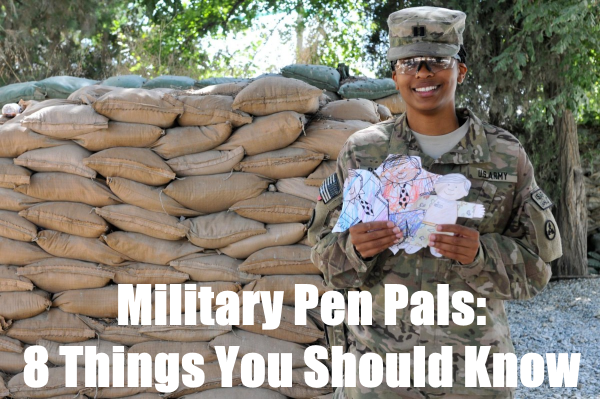 Find out how to become a military pen pal, including trustworthy organizations, who to write to, and more.