Military dog tags are one of the most recognizable features of a uniform.

The iconic piece of identification has origins with the military that dates back more than 150 years.

As a result, dog tags are generally considered one of the most symbolic features of military service.

Military dog tags earned their nickname for the manner they drape around the neck.

However, the main purpose of dog tags is far more morbid.

Learn everything you need to know about U.S. Armed Forces identification, including the 8 things that are on military dog tags.

What Are Military Dog Tags?

The U.S. Armed Forces needs a method to identify soldiers, including when they are deceased.

For this reason, military dog tags were created over 150 years ago for this purpose.

However, dog tags (given the nickname because of the manner they are worn around the neck) also serve as a source of pride.

While military dog tags are primarily designed to identify soldiers that are seriously injured or killed on the battlefield, they are also a testament to survival.

Consequently, many veterans value their dog tags with an incredible source of pride and honor.

For some, it becomes a sentimental token to a fellow soldier and friend lost in combat.

Reportedly, Hearst was not a fan of the concept and thus referred to dog tags in a derogatory fashion.

It includes personal information such as full name, blood type, and inoculation history (more information, below).

Military dog tags are rust-resistant and traditionally worn with a chain that hangs around the neck.

It’s normal for soldiers to wear a pair of dog tags with duplicate information.

The history of military dog tags is extensive.

For starters, you can trace the origins of identification tags back to the Spartans.

The legendary Greek warriors were known to carve their names on sticks which they then tied to the wrist.

Furthermore, Legionaries in the Roman army wore lead disks around their necks engraved with personal details.

Regardless, it was the Chinese military which became the first in the modern era to incorporate identification tags into the uniform.

In the mid-19th century, Chinese soldiers wore tags attached to belts that were made from wood.

Meanwhile, in the United States, military dog tags have origins from the Civil War era.

Sadly, due to the high causality rate, there was a pressing need for a standard identification system.

Later, metal tags or pins became more practical since they are durable and resistant to moisture and damage.

It wasn’t until the early 20th century that the U.S. Army made dog tags compulsory for enlisted personnel.

The original military dog tags consisted of 1) the name, 2) rank, 3) company, and 4) regiment of the soldier.

At first, it was mandatory in the U.S. Army to display dog tags around the neck.

However, regulations changed by 1916, including the new guidelines to wear 2 duplicate tags.

Eventually, in 1917, the U.S. Navy also made dog tags a mandatory piece of the sailor uniform.

The rest of the military branches of the U.S. Armed Forces would follow the same guidelines, shortly thereafter.

In the past, military dog tags looked a lot different then they do now (more information, below).

For example, in the WWII era it was the norm to also have your religious denomination displayed on the dog tag.

However, the Department of Defense (DoD) later found some of this information to be invasive, and rightfully so.

The WWII version featured a small notch that was designed for twisted intentions.

The rumor was the small notch allowed the tags to be stuck between the teeth (and therefore not lost) while the dead soldier was transported back home.

Fortunately, it’s just a rumor as the actual purpose behind the notch were far more wholesome.

It allowed the tag to be placed correctly in a machine which printed off the embossed letters.

During this era, military dog tags also included information such as:

After World War II, the DoD elected to drop the next of kin information from standard-issue dog tags.

Moreover, some of the personal details on the individual’s dog tags did change.

For example, the soldier’s service number was replaced with the individual’s social security number.

Later, in 2015, the military replaced the social security number with the soldier’s Defense Department ID number.

8 Things That Are on Military Dog Tags

“What are on military dog tags?”

Therefore, the information can be utilized to identify a victim that is badly injured or killed in combat.

Moreover, military dog tags are a symbol of the courageous service and dedication one makes to their country.

They are a token to that service as well as badge of survival.

Here are the 8 Things That Are on Military Dog Tags:

The first, and most critical piece of information, is the name of the soldier.

As a result, it’s not surprising that the soldier’s name composes the first couple of lines of a dog tag.

The name is generally displayed, as following:

Last name is first followed by the first name as well as initial of middle name.

It’s the official format for military dog tags now that they have become standardized.

The change is fairly recent having occurred in 2015 after military personnel complained about privacy issues.

Consequently, the Defense Department ID is a more confidential method for identifying personnel.

In general, the military branch is also presented on dog tags.

The military identifier is as follows:

Navy military dog tags are the simplest and most straightforward.

They generally do not even display the military branch.

Furthermore, the recently created U.S. Space Force has yet to develop their own version of dog tags.

Notwithstanding, military dog tags are also utilized by Special Forces including Navy SEALs and Army Rangers.

Related Article – How To Prepare For Army Ranger School

These tags are easily identifiable thanks to the red aluminum metal.

Emergency dog tags provide important information that needs to get relayed to medical professionals if the individual is unresponsive.

The information displayed usually depends on the conditions of each individual.

It’s like a medical bracelet that first responders and physicians can quickly access in an emergency situation.

The blood type of the service member is also usually provided on dog tags.

Of course, this information is prudent in the event of massive blood loss.

It serves a purpose similar to medical dog tags in that first responders can quickly locate the information.

The universal standard makes a tremendous difference where medical professionals often have minutes to save a life.

There are 4 ABO types:

Moreover, the blood type is determined by Rh status (Rh+ or Rh-).

All in all, there are 8 different blood types with each one being extremely unique.

The blood type determines who the individual can give and receive blood from in the event of an emergency.

It’s often displayed on dog tags like “A POS” or “O NEG”.

The last piece of essential information on modern dog tags are vaccinations.

It’s important for medical personnel to have quick access to inoculation history in the event of an emergency.

Military dog tags provide medical with which vaccinations the injured soldier has received in the past.

While vaccinations have become more controversial in recent memory, they are still a good idea for preventing serious disease.

Thus, the most common vaccinations administered in the military include:

The most recent controversy has been whether military personnel should be required to have the COVID-19 vaccine.

It reminds us of another controversy that once surrounded military dog tags.

Related Article – 19 Vaccines Given By The US Military

In the past, your religious preference was displayed on dog tags, whether you liked it or not.

It was easily one of the most controversial items that existed on WWII dog tags.

However, the original intention was that the denomination would assist with religious burial requirements.

Military personnel were generally classified as “Protestant”, “Catholic”, or “Hebrew”.

Of course, the religious designation not only seemed invasive but also failed to ignore a variety of other religious practices and denominations.

As such, it varies on military branch whether religious preference is stated on dog tags.

Furthermore, service members have the option of selecting “None” for religious preference.

It’s also worthwhile to mention that the Department of Defense does not have any list of “approved” religions.

Therefore, military personnel are allowed to claim any religious belief they desire including “Agnostic” or “Atheist”.

As previously mentioned, soldiers are required to wear 2 different dog tags, each with the same information.

The purpose of duplicate dog tags is for the gruesome reality of warfare.

In the event of serve injury or death, it allows for one of the tags to be removed while the other remains with the body.

Soldiers usually elect to carry the duplicate dog tag on the same chain while others bury the second copy inside their boots.

There is no uniform requirement so long as you have the second dog tags somewhere on your possession.

Some argue that military dog tags are no longer necessary in the era of advanced DNA technology.

However, it’s a tradition that many refuse to dismiss given that dog tags represent the incredible sacrifice and commitment each solider makes to their country. 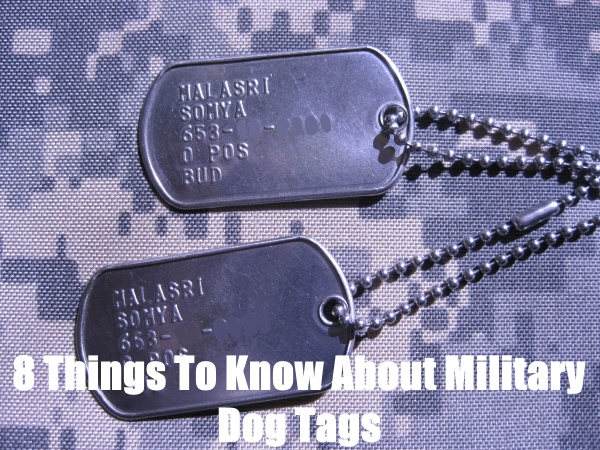 What Are On Dog Tags

What personal information is displayed on military dog tags? Learn more about the history and purpose of military identification.