There is a strong impulse among most American civilians to thank members of the Armed Forces, especially when we see them in uniform.

However, there are many people within military families who don’t wear uniforms, yet deserve gratitude as well.

Military spouses are at the top of the list of those deserving appreciation for all that they do to support service members, their families, and the military itself.

Here is everything you need to know about Military Spouse Appreciation Day.

1. What Is Military Spouse Appreciation Day?

There are established dates built into the U.S. calendar year to acknowledge and express gratitude towards those in military service, past and present.

These include Veterans Day, Memorial Day, and Armed Forces Day.

What the military has learned across time is that appreciating and caring for military family members is important as well.

This has a strong impact on morale, readiness, and mission success among troops.

In addition, the level of happiness among service member spouses can be a determining factor in the decision to reenlist and/or continue to serve in the Armed Forces.

Therefore, Military Spouse Appreciation Day is intended to recognize spouses of Armed Forces service members for the impact they have on the military community.

Though most military spouses would probably say that they don’t need a formal appreciation day, it’s a positive gesture to recognize the sacrifices they make and the support they give.

2. When Is Military Spouse Appreciation Day?

It was established by Proclamation 5184 and intended to recognize the “countless sacrifices and contributions” that have historically and consistently been made by military spouses.

Since then, the sitting president will usually recognize this special day and U.S. military bases and posts typically hold annual celebrations to honor these women and men.

May was established as Military Appreciation Month in 1999, and this included official recognition of Military Spouse Appreciation Day on the Friday before Mother’s Day.

In addition, nearly three-quarters of active duty military spouses have children at home that are under age 18, compared to less than two-thirds of civilian spouses.

In most cases, life as a military spouse is very different from that of their civilian counterparts.

They are usually stationed far from their original home, lacking direct or in-person access to support from family and friends.

In addition to supporting the military and their service member spouse, military spouses provide care and support for each other, creating what many consider to be a shared military family.

Here are just some of the additional reasons that military spouses deserve appreciation:

Deployments And Time Away From Family

Service members are deployed for many reasons, meaning they are mobilized for action somewhere that their families cannot go.

This often leaves the military spouse as a single parent, if there are children, and with full responsibility of running the household for the entirety of the deployment.

In addition, not all deployments mean that the service member will face combat situations, but a good portion of them include serious risks.

This can add even more tension to an already difficult and stressful deployment period that can potentially last for six months to over a year.

Military members are frequently away from home even when they aren’t deployed, for field and training exercises, military education courses, and other missions.

Therefore, important events and milestones such as holidays, anniversaries, and birthdays are often spent while separated.

Such distance and time apart can put a strain on spouses of service members as they work to maintain their marital relationships and family stability in addition to their own health and well-being.

Most service members are relocated to different geographical areas every three years, on average, and sometimes more often.

In addition, military families are likely to move to remote areas, including different countries overseas.

This frequent PCS (permanent change of station) brings with it many challenges such as:

Moving is a stressful life event under any circumstances, and frequent military relocations can cause aggregate stress—especially for military spouses.

Perhaps the greatest reason that military spouses should be appreciated is the fact that they typically sacrifice many of their own life goals and pursuits while in the role of supporting their military family.

As a spouse of a service member, it’s often difficult to maintain a consistent, personal career due to frequent moves—especially if the career comes with demanding hours or a heavy workload.

In addition, military spouses tend to put their goals for higher education and/or earning a degree on hold due to the demands that come with their spousal role.

Overall, one of the best examples of the self-sacrificing nature of military spouses is the way in which they support each other, through happy times as well as unexpected tragic events.

Of course, military spouses generally have a great deal of appreciation for their service member, their larger military family, and the military itself.

There is a great sense of pride and service among this group, though they often remain behind the scenes.

As a result, most service member spouses willingly and happily make the sacrifices and choices they do for their own families and the military family as a whole.

However, it’s nice to acknowledge and express appreciation for this important group of military family members.

Therefore, whether you personally know any service member spouses or not, you can keep a good thought for these women and men on the Friday before Mother’s Day, Military Spouse Appreciation Day. 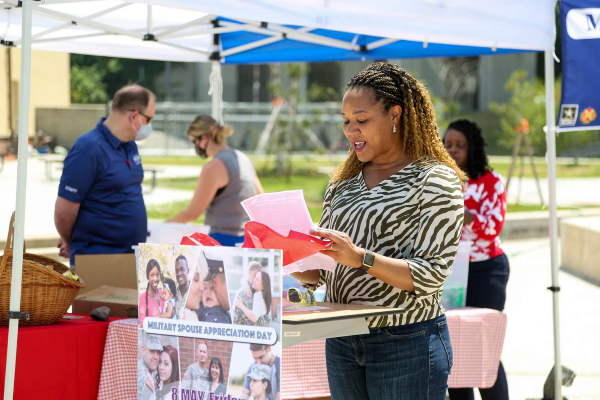 Military Spouse Appreciation Day are established dates to acknowledge and express gratitude towards those in military service, past and present.