There are many duties associated with a career as a Navy Cryptologic Technician-Networks (CTN), and those duties all revolved around computer operations on global networks.

This career has evolved since its inception in 2004.

Currently, approximately 1,900 service members serve in the Navy with a CTN rating.

As a CTN, you progress as you continue to learn and grow from an Apprentice to a Journeyman, while finally progressing to a set of skills at Mastery.

These skills are highly marketable and necessary for national intelligence needs.

Related Article – How To Join The US Navy

Requirements and Qualifications for Navy CTN

There are a few requirements to be considered a candidate for a position in the Navy as a CTN.

You must have graduated from high school.

However, without a high school diploma, an equivalent degree is necessary.

Along with the equivalent degree, you must have successfully completed the tenth grade.

Also, applicants must be U.S citizens.

Furthermore, immediate family members of the candidate must be either citizens or from a country with a low rating on the Intelligence Community Directive Number 704’s list of low-risk countries.

Applicants must be of good character without moral turpitude charges.

Also, those who were members of the Peace Corps may not be a Navy CTN.

There are scoring requirements for the ASVAB test, as well.

One scoring option is a total of 255 between arithmetic reasoning, mathematical knowledge, and general science.

Another scoring option is a total of 235 between the verbal score, which is a raw score of the word knowledge and paragraph comprehension sections, as well as arithmetic reasoning, mathematics knowledge, and mechanical comprehension.

Also, the final scoring option that would qualify an applicant is a score of 235 between arithmetic reasoning, mathematical knowledge, and general science coupled with a 65 on the cyber test.

Also, applicants should possess an interest in electronics and advanced technology.

This training is called Class “A” and is 26 weeks in length.

There is a tremendous amount of on the job training for those in this career.

Also, this training leads to professional credentials and opportunities both in the Navy and as a civilian.

Working Conditions for a Navy CTN

A Navy CTN can work around the world.

Often, NTN’s find themselves on an aircraft, surface ships, submarines, or onshore.

Other CTNs may be linked to a Special Warfare team.

Usually, a Navy CTN works in an office or a lab-type situation.

However, it is not unusual to work in a maintenance shop or a similar secure location.

In many cases, a Navy CTN works with a small team.

However, it is also likely a Navy CTN works independently without very much oversight.

This field in the Navy does not have a defined sea/shore rotation.

A Navy CTN may find themselves re-touring in the same command depending on the operational needs of the Navy.

The benefits in the Navy are competitive and include low-cost health coverage, including long-term care coverage, vision, and dental, to name a few.

Also, the professional credit earned in this field translates into college credit hours through the American Council on Education.

Furthermore, a Navy CTN may be eligible for up to $65,000 student loan repayment for those who join the service with student loans.

The Navy Also offers competitive pay for their members.

However, the Navy pay system depends on rank and time in service.

The Cryptologic Technician community has a wide variety of tasks; therefore, these tasks break down into different branches.

The Navy Cryptologic Technician-Networks is one such branch with its own set of duties.

A Navy CTN is responsible for analyzing collected information and conducting computer network operations, all while protecting the vulnerability of those networks.

A Navy CTN must mitigate the risk of networks and determine vulnerabilities.

Also, all of these computer network operations services to support the Navy and the Department of Defense.

Reviews reveal satisfaction in this career, with most members concerned about finding a work-life balance with moving around frequently and rotating shifts.

Also, there is some concern that highly-skilled enlisted members realize their earning potential is high as a contractor or civilian while they are still enlisted. 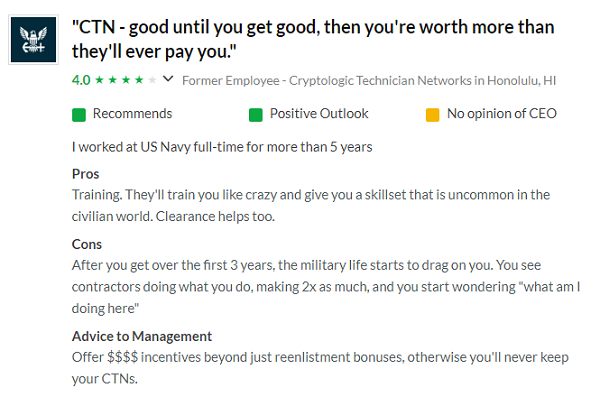 There are many civilian opportunities related to this career path.

Because of the security clearance necessary for this career, upon leaving the Navy, service members might consider a variety of federal jobs.

Typically, those who serve as a Navy CTN look for positions as civilians in the U.S Intelligence Community, the Federal Bureau of Investigation (FBI), the Central Intelligence Agency (CIA), or even the National Security Agency (NSA).

There are other well-paying civilian options, as well.

This field requires a master’s degree, but with the educational benefits available in the Navy, service members have time to plan for their careers after the Navy.

The outlook for this career expected growth is 17 percent, which is much faster than average.

Computer and Information Systems Managers have a typical earning potential of $142,530.

The projected job growth in this position is 11 percent, which means the outlook is fantastic.

The recommended education is a bachelor’s degree, as well as at least five years of work experience in the field.

The growth in this field is average at five percent.

To work in this field and to earn the typical wages, having a bachelor’s degree and five years of experience is necessary.

There are many reasons to consider a career as a Navy CTN.

There are requirements to qualify as an applicant in this field, including character, citizenship, education, and aptitude.

The working conditions for this field are varied, and navy CTns find themselves all over the world.

The pay and benefits depend on rank and time in service.

However, there is a student loan repayment benefit for those who go into this field with existing student loans.

A Navy CTN works with sensitive information and mitigates the risk and vulnerabilities of networks.

After the military, this career path is highly lucrative as either a federal or a private employee. 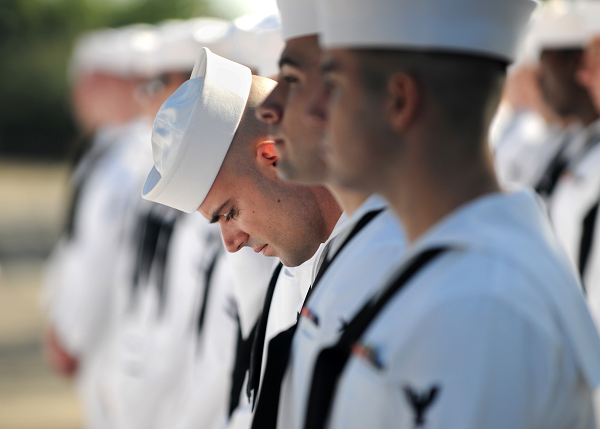 Learn more about what a CTN in the Navy does, the requirements to become one, training, day to day life, and much more.