The United States Navy has an impressive fleet of aircraft carriers (some of which are nuclear-powered).

Aircraft carriers are not only impressive in stature but well-oiled machines.

The crew that works on Navy aircraft carriers amount in the thousands and work hard to keep operations precise and effective.

Once you board a Navy aircraft carrier flight deck you will notice that the crew has different color uniforms.

What do all the colors on a Navy aircraft carrier flight deck represent?

The United States Navy currently has over 40 active aircraft carriers that are placed around the world.

Additionally, the largest carriers in the world belong to the U.S. Navy.

Some of its nuclear-powered vessels are capable of supporting approximately 80 fighter jets as well as thousands of crew members.

While there are many different job duties aboard a Navy aircraft carrier the primary purpose remains the same – to put aircraft into the air and safely recover the aircraft.

Navy aircraft carrier personnel are distinguished by the color of their uniform.

Everyone that serves on the flight deck has a specific job:

The United States Armed Forces can easily segment crew members based on the color of their shirt since they are noisy and dangerous places to communicate in a traditional way.

Flight deck crew also wear a colored float coat and helmet to signify their responsibilities on the ship.

Furthermore, military personnel gets distinguished by the pattern on their trousers which represents their rank:

Continue reading to get a better understanding of what each color shirt represents on an aircraft carrier:

Crew work on fixed-wing and rotary aircraft while performing operations aboard an aircraft carrier.

Navy Green Shirts are primary behind the scenes personnel that help launch and recover aircraft with impressive efficiency.

Life on the flight deck is impressive to watch yet also hard labor.

However, the work is some of the most rewarding you can experience in the U.S. Navy.

Yellow shirts represent officers and other positions where crew act as supervisors.

They include the following aircraft carrier jobs:

The Navy Plane Director is responsible for the movement of all aircraft on the flight/hangar deck.

If you see on aboard a carrier, make sure to treat these officers with respect and courtesy.

Along with the challenges that crew members face on the deck, they also have to deal with the elements.

While serving the U.S. Navy on an aircraft carrier does allow you to see the world, you’ll also have to learn to deal with the elements.

Flight deck crew deal with the added challenges of operating a ship at high sea.

They also work long hours and at an extremely fast pace.

Here are some of the job roles of red shirts:

Red shirts not only observe ordnances but also do damage control in the event they need to recover aircraft from the sea.

Their shirt color indicates that they are emergency personnel capable of operating with amazing effectiveness.

Purple shirts are unique in that the shirt color only represents one type of job duty.

Thus, purple shirts are associated with an Aviation Fuel Handler.

Aviation Fuel Handlers are also nicknamed “Grapes” because of their shirt color.

Grapes need to operate at maximum efficiency which makes time of the essence.

Their objective is to refuel aircraft as quickly as possible to get the various types of aircraft back to the air.

For this reason, you rarely see Grapes standing around for too long because they got a busy job.

Related Article – List Of Navy Bases In The US

Pri-Fly is in the tower of the aircraft carrier.

Those crew members are responsible for communicating with handlers as they orchestrate launches and recoveries.

Consequently, the deck crew serves as the nexus between the internal command and control and deck operations.

Chocks and Chains are entry-level flight deck workers that answer to yellow shirts.

They do a ton of dirty work in the trenches and don’t get a lot of glory for their hard work.

White shirts have a few different responsibilities in the U.S. Navy.

There is also medical personnel that wear white shirts with a Red Cross emblem on deck.

Lastly, some officers wear a white shirt and are separated from their counterparts by khaki pants (compared to blue pants).

You can find the following Navy ratings donning white shirts:

White shirts are a little more confusing to distinguish just because the color can represent a few different functions.

Brown shirts are the final color that you will find on a flight deck.

This type of personnel has a couple different purposes.

Regardless, you are dealing with an officer when you associate with a brown shirt.

They are a squadron leader that prepares aircraft for flight.

Related Article – Navy Tattoo Policy: What IS And What ISN’T Allowed

How dangerous is it to work on the flight deck of an aircraft carrier?

The flight deck of an aircraft carrier is extremely dangerous.

Personnel has to deal with incredibly loud sounds as well as hot exhaust.

Furthermore, the crew has to account for the rapidly changing weather of the sea.

They also perform functions during the day and night, each of which presents different challenges.

In conclusion, serving aboard a Navy aircraft carrier is not for the faint of heart yet a once in a lifetime experience.

Why do pilots salute before takeoff?

There is a long and proud history between ground crew and flight crew.

The flight crew recognizes the hard and thankless work of the flight deck members.

Therefore, they present a salute to the ground crew as they prepare to depart from the carrier.

Additionally, the military salute certifies that the pilot checked the aircraft and that it’s ready for launch.

For this reason, the salute to the Catapult Officer indicates that the pilot is ready for takeoff.

How long is the landing area on an aircraft carrier?

Pilots that take off and land on aircraft carriers are extremely skilled.

Landing on a flight deck is one of the most difficult tasks a Navy pilot will ever accomplish.

The traditional aircraft carrier only has 300-500 feet of runway space for landings.

It’s a stark contrast compared to a conventional runway that provides more than 2,000 feet of runway space.

Therefore, taking off and landing a jet on an aircraft carrier poses a series of challenges that ground crew help accommodates to make each maneuver safe and efficient.

No, Navy Shooters are not pilots.

Navy Shooters is a nickname for Catapult Officers.

Catapult Officers are naval aviators or naval flight officers who ensure the safe and efficient launch and recovery of aircraft.

They have a tremendous responsibility as every pilot puts a lot of their trust and faith in Navy Shooters.

It enables the crew to quickly distinguish themselves aboard the busy and noisy flight deck.

Each shirt color on an aircraft carrier has a different meaning and is something you’ll learn about if you decide to pursue a career that involves a ship. 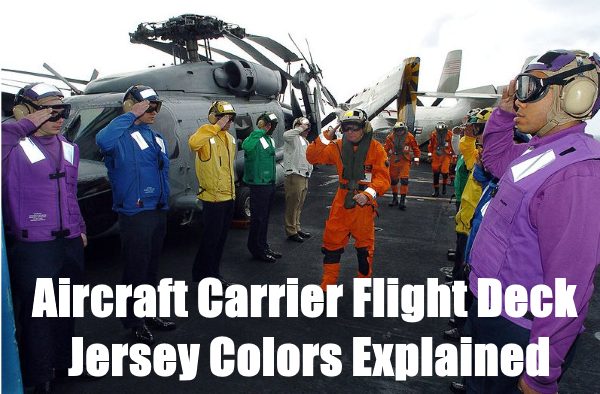 Each jersey color on an aircraft carrier has a specific duty. Find out what each flight deck crew color means and more.