The U.S. Army organizational structure can be confusing at first glance, and you may find it hard to follow charts on platoon size and how the U.S. Army is organized.

Learning the organizational structure of the U.S. Army allows for an understanding of the overall size of the Army and each of its components.

The U.S. Army structure flows together as each component being an integrated part of the unit above it.

The field army is one of the largest units in the organizational structure, consisting of 90,000 soldiers, and each subsequent unit falls under a Field Army command.

Related Article: 3 Steps For Visiting An Army Recruiter Near You

The smallest unit is called a fire team and consists of 4 soldiers.

Organizational structure from the field army to the fire team consists of corps, division, brigade, battalion, company, platoon, and squad.

Once soldiers reach Specialist (SPC) rank, they can manage other lower-ranking soldiers in units.

Lower units, such as the fire team, will be lead by Corporal or higher-ranking officers.

As soldiers rise in rank, they can command higher-level units.

Army units, size, general purpose, and commanding rank can be found below.

Note: These are listed in order of largest to smallest.

Here’s a chart of exactly how the US Army organization breaks down.  Below this chart are details on how large the elements are, what their rank structure is, who commands them, and more.

A Field Army is made up of two or more corps and can hold around 90,000 soldiers.

It is run by a General, which is generally a 4-star General.

Field Army is used in wartime in support of theater of operations and generally covers a specific geographical area.

Field Army can be part of an Army Group.

Corps are a component of the Field Army.

Currently, the Army is made up of three corps with headquarters in the Continental United States.

A lieutenant general is in command of Corps with the function of providing command, control and logistic support.

The lieutenant general is a three-star general and is generally concerned with administration over operations.

A command sergeant major assists the lieutenant general in addition to Corps staff.

The Corps are considered a deployable level of command used to sustain combat operations.

They are the highest level of command that can provide operational direction.

Divisions can be made up of anywhere from 3 to 4 brigades and are a component of the larger unit, Corps.

Divisions are run by a major general with a command sergeant major as the NCO assistant.

A division major general is assisted by two principle brigadier generals with respective duties with either maneuver or support.

The purpose of a division is to perform major tactical operations with sustained battles and engagements.

A division can be either cavalry, armored, infantry, airborne, or artillery.

A brigade is made up of a few battalions and is part of a division.

The size will vary based on the number of battalions but can range from 1,500 to more than 3,000 soldiers.

A colonel is in command of a Brigade and the colonel is assisted by a command sergeant major.

A brigade can be independent or semi-independent.

Brigades include the primary combat arm, with sustainment, maneuver or supporting functions.

A battalion consists of 3-5 companies and is part of a brigade.

They can have up to 1,000 soldiers in a Battalion.

A battalion is commanded by a lieutenant colonel with a command sergeant major as an assistant.

Battalions are tactically and administratively self-sufficient with the ability to perform independent operations.

When a comparable size unit consisting of an armored or air cavalry units exist, they are called squadrons instead of battalions.

To improve mission capabilities, a battalion can be expanded to a battalion task-force, which is a battalion-sized unit with additional companies attached.

Related Article – How To Join The US Army

A company consists of 3-4 platoons and is part of a battalion.

They can range from a few dozen soldiers to up to 200.

A company is commanded by a captain with a first sergeant as the assistant.

The captain is responsible for the direction, training, and welfare of those below him.

Companies are built around a function (specialties such as signal repair or reconnaissance) or around a weapon (infantry, tank).

If the unit is field artillery or air defense artillery, it is actually called a battery versus company and if it is an armored air cavalry or ground unit, it is called a troop.

Platoons are made up of a few squads and fall under a company.

They can have up to a few dozen soldiers and are ran by a lieutenant.

Generally, in infantry, the platoon consists of 3 infantry squads, a weapons squad and a platoon headquarters-with a platoon radiotelephone operator.

The platoon is a task-organized unit that deploys squads based on the mission from the above company command.

A squad, also called a section, consists of about 9 soldiers.

A staff sergeant is in charge of a squad.

The squad is made up of two fire teams and a leader.

The role of the squad is to balance the two fire teams as the fighting element.

Squads have different capabilities but can be used to conduct a fire and movement, provide security or establish a base of fire.

The role of the squad leader is to direct the team leaders (the two leaders in the respective fire teams), communicate locations, control movement of the squad, controls distribution of fire and selects location.

The role of the fire team is to be the movement and the fighting element.

Having a small firing team is effective because it allows for maneuverability and stealth, not easily achievable with larger groups.

Fire team is generally made up of four soldiers.

The fire team runs under the squad leader, who will control their objectives.

A fire team does have a team leader, who will control aspects such as positioning and ensuring all members are meeting their responsibilities.

The team leader is generally a corporal or sometimes a sergeant.

Fire teams can have a grenadier, automatic rifleman and a rifleman.

What are the sizes of units in the US Army?

In ascending order of size, these units currently used by the US Army are: Squads, Platoons, Company, Battalion, Regiment, Brigade, Division, and Corps.

What is a platoon in the Army?

An Army platoon consists of a handful of squads, comprising 16 to 44 soldiers under the command of a lieutenant with a non-commissioned officer serving as second in command.

How big is an Army company?

A company consists of three to four platoons and operates as part of a battalion. Companies can consist of a few dozen soldiers up to 200 under the command of a captain with a first sergeant as second in command.

How many soldiers are in an Army battalion?

Up to 1,000 soldiers serve in a battalion. Under the command of a lieutenant colonel with a command sergeant major as second in command, a battalion comprises up to five companies.

How many soldiers does an Army general command?

Generals usually command a corps. Corps comprise up to five divisions, with anywhere from 20,000 to 40,000 soldiers.

When learning the Army organizational structure, it can be confusing to understand where an individual soldier belongs.

A soldier is not just a component of one unit, but rather every unit.

A unit in the Army organizational structure falls under a larger combined unit.

One of the largest Army units is the field army and the smallest is a fire team.

Each unit is ran by a different ranking soldier, can hold anywhere from 90,000 (field army) to 4 soldiers (fire team) and has individual functions.

Understanding how the Army structure works provides a respect for how large the Army is, and how well each component works together.

US Dept. of Defense 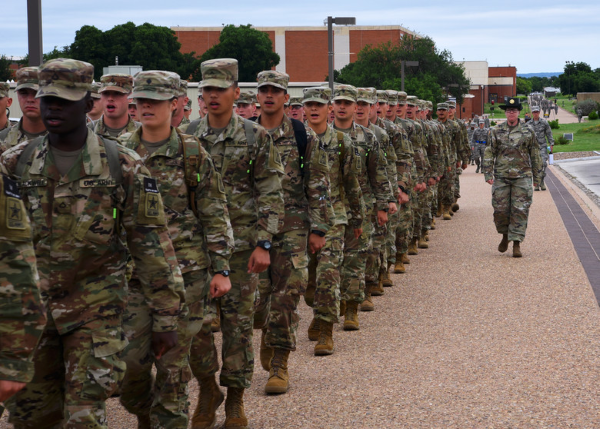 Learn more about how the US Army is structured, as well as how big a platoon is, what comprises a fire team, and much more.