When you join any branch of the military, your first week at boot camp involves immunizations, including the famous ‘peanut butter shot.’

In general, vaccines are essential for ensuring you remain healthy, especially with so many people living in close quarters as they do in boot camp.

However, receiving your shots is a rite of passage all members go through, and some recruits have a much harder time than others.

Related Article – What to Bring to Navy Boot Camp

1. What is the Peanut Butter Shot?

The peanut butter shot is what the military calls an injection of bicillin. Bicillin is another name for penicillin, and it is used to both prevent and treat bacterial infections.

This painful injection would cause recruits to pass out.

Also, no one looked forward to the excruciatingly long needle plunging into their rear cheek.

2. Why is it called the ‘Peanut Butter Shot’?

This injection received the moniker ‘peanut butter shot’ for a couple of reasons.

First, the color is reminiscent of peanut butter.

Also, the liquid does not just quickly absorb into your system like you think it should.

Instead, it is thick and deep in your muscle tissue, where it sits like an angry lump. Every time you shift and move, that angry lump reminds you of its unwelcome presence.

It did not help that it took forever for the injection to finish due to the medicine being so thick.

3. Was the Peanut Butter Shot Discontinued?

While rumors are going around that this shot is no longer given to new recruits, this is not exactly true.

There is some discussion that there are times the military switches to oral medication as a substitute.

However, the pills are known to have their own set of side effects that are not much better than the peanut butter shot.

Related Article – What to Bring to Marine Boot Camp

4. Did the Peanut Butter Shot Hurt?

Unless you enjoy not being able to sit and move comfortably because of this injection, receiving this injection is a terrible experience.

The injection site stays red and large until the thick medicine has time to fully absorb. It seems as though it takes days to diminish.

Furthermore, the shot is given high on your buttock, so pretty much all movement, including sitting, reminds you of that large, red, and angry lump.

Fortunately, you do not spend much time sitting in boot camp.

However, every other movement is uncomfortable, as well, because the injection is given deep within your muscle.

Also, the exam room where the shot occurred had padded floors.

The extra padding is for those who pass out so they have a soft landing.

5. What Shots Do They Give You in the Military Now?

The peanut butter shot is not the only injection of which to look forward.

When it is time to do your medical eval the first week of boot camp, all recruits line up with their sleeves rolled up.

The injections are given in both arms and are often done simultaneously.

You take a step, receive your first round of injections before stepping to the next round of shots.

Often, recruits hold a gauze pad in each hand to press over the injections site before sitting down on the floor in case you pass out.

There are many immunizations that all branches give new recruits.

If it is flu season, all recruits will receive the flu immunization.

Measles, mumps, and rubella are also given to all recruits.

If you are in the Air Force, you will also receive an injection for hepatitis A and yellow fever.

Those in the Coast Guard, Navy, and the Marines will receive yellow fever injection, as well.

Also, the Coast Guard inoculates against the Adenovirus.

There are other immunizations available to service members, but they are dependent upon where you are stationed or where you are deployed.

If you find yourself on the receiving end of a peanut butter shot, do not look at the needle.

It will feel like the injection takes forever, and that is because it takes a long time to plunge the thick substance into your muscle tissue.

You can expect lingering pain, but if you massage the angry lump, you might be able to encourage it to absorb faster. 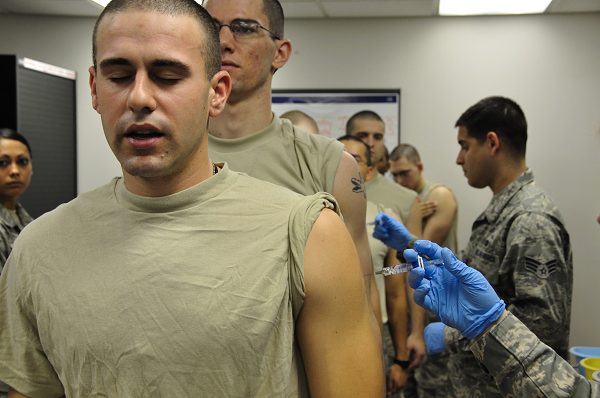 The Peanut Butter Shot is a vaccine that is given to all new recruits in the US military. Learn more about the shot, including what it's for, when it's given, and why it's called the 'Peanut Butter Shot'.