Also, when you think about Army Special Forces, you might think about Special Operation Forces and Special operations.

These two groups are not the same.

Special Operations Command includes the Special Forces, which are the Green Berets, Army Rangers, and the Night Stalkers.

However, sniper rifles, which we discuss later, are in a different category than Special Forces rifles.

The MK 12 is a semi-automatic marksman rifle extensively in use with Special Operation units.

This rifle is gas-operated with a rotating bolt.

Furthermore, it fires up to 667 rounds a minute.

This rifle is shorter than other rifles, and the rifle came about because the Army and the Navy both wanted an effective range weapon that is shorter.

Also, the MK 12 is a modular weapon, meaning the optics, sights, and everything else is swappable with other accessories for a fully customized experience.

A shooter can even use night vision devices.

The MK 12 has the designation of SPR, which used to stand for Special Purpose Receiver.

However, now the rifle setup is a whole system, and the acronym means Special Purpose Rifle.

The MK 15 SCAR-L is a lightweight option for special forces weapons. The -L stands for ‘light.’

This modular rifle has three different barrel options, including 10, 14, and 18 inches.

Lastly, the MK 16 SCAR-L is a modular weapon that allows for several options for accessories and configurations.

The M4 is gas-operated and air-cooled.

Also, this magazine-fed special forces weapon has a telescoping stock.

Furthermore, the M4 is a standard weapon in the Armed Forces and replaces the M16.

The Army infantry units use the M4 as their primary weapon.

The M4 Carine has several modifications and different variants.

One variant, the M4A1,  is a popular Special Forces weapon.

The M4A1 is a fully automatic M4 rifle with an automatic trigger.

Sniper rifles are a necessary part of Special Forces weapons when a standard rifle won’t due.

Typically, anytime there is a need for long-range accuracy, a sniper rifle is necessary.

The M107 has an incredible range and is well-known for its precise firing.

This sniper rifle has a dual chamber and barrel springs.

Furthermore, the M107 has a power day sight as well as front and rear sights. Both sights fold, and the carrying handle is removable.

Also, a monopod socket comes out from the end of the stock right behind the rear grip.

The detachable bipod has spike feet, and even the muzzle break detaches.

This semi-automatic weapon is air-cooled, and instead of gas, it relies on a short recoil.

The M24 Sniper Weapon System (SWS) consists of fiberglass, Kevlar, and graphite with an aluminum block.

The M24 is the military version of the Remington 700.

Also, the Army took on the M24 as its standard rifle for snipers.

The rifle has the name Sniper Weapon System (SWS) because it comes with accessories, including a telescopic sight, although there are backup iron sights.

Remington manufactures the M24, and there are other variations of this rifle, including the M24A2, M24A3, and the M24E1.

The maximum firing range of the M24 is around 4,400 meters, but the effective range is closer to 1500 meters.

Also, the record range with this sniper rifle is just over 1000 meters.

The M110 is an American-made semi-automatic marksman rifle and once won an award for best invention.

This sniper rifle is lightweight and gives snipers a tactical advantage with its advanced scope’s high magnification.

Also, this weapon allows rapid-fire with a quick reload.

The rifle is gas-operated and is known for its accuracy.

Also, the M110 has a power day optic sight, a highly effective and quick to attach and detach suppressor.

The rifle is ambidextrous and has rail mounting capabilities.

Usually, Special Force Weapons primarily include rifles, but a pistol is handy as a secondary weapon.

Plus, there is a running joke that the pistol use is primarily to fight your way back to the rifle you should have never laid down.

That said, a handgun has many uses and has a place as a Special Forces weapon.

The M9 Berreta is a widely available and used weapon in most military branches.

Also, this semi-automatic weapon has a short recoil.

Furthermore, the M9 Berreta is popular with both left and right-handed shooters.

The weapon resists corrosion because of its chrome barrel and overall coating, making it easy to care for.

As a whole, it is a reliable handgun.

While the Berretta is typically the official Armed Forces handgun, the Glock 19 is the go-to handgun for those who have a choice about what they carry.

The Glock 19 is an easy-to-conceal weapon, and it packs pretty much everything the Glock 17 offers but in a smaller handgun.

There are other variations of magazine size, but the standard 15 round magazine is a favorite for this compact option for special forces weapons.

Also, the Glock 19 is reliable due to its near nonexistent chance of misfiring and its safety features.

The safety features of this handgun include a trigger safety that disengages once the trigger is fully depressed.

Also, a firing pin safety keeps the firing pin in place until the trigger safety disengages.

Lastly, the drop safety prevents any of the few internal moving parts from moving until the trigger safety disengages when pulled.

When you think about special forces weapons, you might not consider the uses of a shotgun.

However, shotguns help breach obstacles and are handy in close combat firing.

There are different configurations for the M4.

Also, there is an M1014 option for military use.

The M1014 is a semi-automatic shotgun for use in close combat situations.

Benelli is responsible for the invention of the auto-regulation gas system (ARGFO).

The gas drives the pistons, which operate the action of the shotgun.

As the pistons drive the bolt and eject a shell, the hammer cocks ready for the next round.

This gas design significantly reduces the recoil of this powerful shotgun.

The firing is accurate, which is ideal for close-quarter fighting.

There are three Mossberg 500 series shotguns, and the 590A1 is a common sight in the Armed Forces.

The Mossberg 590A1 is a pump-action shotgun, and it is the only pump-action to pass the MIL-S-3443G United States Military Specification that defines the expectations for shotguns.

While the barrel length typically depends on the owner’s desires, the military-grade 590A1 usually has an 18.5-inch barrel.

This shotgun is all-metal, durable, and can handle some rough conditions.

Special Forces weapons are only part of the equipment utilized by Army Special Forces. There are several other valuable gadgets and pieces of equipment, as well.

The M67 grenade is a standard military piece of equipment since the late 1960s.

Also, the M67 is a fragmentation grenade, which means it shatters, and when the grenade explodes, it sends steel fragments out close to 50 feet.

The M67 is fatal within 16 feet and causes injury beyond that.

Also, this grenade launcher is high-tech. You can program both the weapon and the ammunition.

The MK47 is about 40 pounds alone, but with its tripod and fire-control, it is 90 pounds.

Limited visibility is no obstacle for the Enhanced Night Vision Goggles (ENVG).

Even with limited light, Special Forces soldiers can see.

The ENVG uses thermal sensors to help in low-light situations, including smoke or even dust.

Also, the thermal ability of the ENVG makes this piece of valuable equipment during the day, as well.

The ENVG weighs just under two pounds and works for up to 15 hours.

When a Green Beret is not in their green berets, you might find them in their Future Assault Shell Technology helmet (FAST).

The FAST helmet is shell-shaped and extends over the rear occipital bone.

Also, the engineering of the FAST helmet is meant to distribute weight, so the helmet is comfortable.

Furthermore, this helped allows for the addition of lights, cameras, and night-vision goggles. 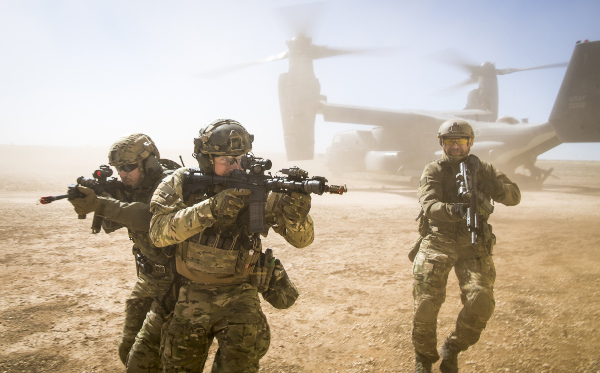 US Army Special Forces employ a wide array of weapons, including tactical rifles and shotguns, as well as pistols and other equipment.