Delta Force, or “The Unit”, has an outstanding reputation within the military ranks.

Learn more about the various Delta Force weapons and gear to find out what elite operatives rely on in the field to engage the enemy.

However, the firearm can look completely different depending on how each operative decides to customize the weapon.

The M4A1 traditionally features a SOPMOD II upgrade which adds accessories to the assault rifle like handgrips, rails, scopes, and magnifiers.

The carbine is generally fed from a 30-round STANAG magazine.

Additionally, Delta Force likes to use the MK18 variant of the Colt M4.

The MK18 variant is a shorter version which is ideal for close-quarters combat (CQC).

The extremely reliable M4A1 and MK18 variant are personal favorites among Delta Force weapons and gear.

It was used heavily during the conflicts in Afghanistan and Iraq, including the invasion that killed Osama bin Laden.

The HK416 Carbine is heavily influenced by the legendary Colt M4 / M4A1.

Delta Force worked closely with Heckler and Koch (HK) – a German firearms manufacturer – in the production of the HK416 Carbine, like the M4A1.

As a result, the HK416 Carbine is known for being less prone to malfunction compared to the standard-issue M4.

The primary change in the design is a short-stroke pas piston system which is renowned for its reliability.

Today, Delta Force weapons and gear alternate between the HK416 and M4 as its primary carbine.

Delta Force is known for liking to use the weapon along with other special forces like DEVGRU.

The HK415 assault rifle is easy to customize and even supports an AG416 40mm grenade launcher attachment.

The M3A1 sub automatic machine gun is a throwback to the early days of Delta Force.

While it is not relied upon heavily anymore due to its low muzzle velocity and rate of fire, the M3A1 has a terrific history within elite forces.

The “grease gun” was used during World War II and its specs are ideal in support of hostage rescue missions, one of the primary duties of Delta Force.

The .45 ACP rounds have fantastic stopping power (especially for the era it was invented) and are interchangeable with pistols from the same generation.

Additionally, the low muzzle velocity prevents the rounds from passing through walls or other obstacles that may detour hostage rescue missions.

Nonetheless, most members of Delta Force prefer something more modern when hitting the battlefield even if you cannot ignore the history of the M3A1 Grease Gun.

The M16 assault rifle is another popular choice within special operations forces.

It has a long history having first appeared in the U.S. Armed Forces in the early 1960s.

Today, special operatives such as Delta Force continue to turn to the M16 for its dependability even if the M4 is preferred.

The M16 automatic rifle is the most popular produced 5.56 mm caliber firearm in the world.

The weapon was a mainstay for jungle warfare during the bloody Vietnam War.

The Walther MP was the first 9 mm submachine gun used by Delta Force.

It is worth noting since the Walther MP was invaluable in helping with the evolution of the special operations unit.

The Walther MP was able to bridge the gap between the M3A1 Grease Gun and the Heckler & Koch MP5.

The MPK is shorter and known for its folding tubular stock.

The block back design of the firearm is produced from an L-shaped bolt.

For this reason, the Walther MP is incredibly compact and capable of being concealed under clothing.

It can also get fitted with a sound suppressor for special reconnaissance.

The Beretta M9 is the standard-issued pistol of the U.S. Army.

It has gradually replaced the Colt 1911 which has a long tradition within Delta Force.

The M9 semi-automatic pistol offers a short recoil with a single action or double action version.

The pistol produces 15 rounds of 9 mm ammunition and is often upgraded to the M9A1 variant.

Glock is a well recognizable name in handguns.

Fittingly, Delta Force has adopted Glock firearms into their arsenal even if the U.S. Army prefers the standard issued Beretta M9.

The semi-automatic Glock 9mm pistol is sporadically used within Delta Force and other elite units like Army Rangers.

Glock pistols are available in a variety of sizes and calibers.

The Glock 22 is a popular modern version that is more compact and effective compared to the Glock 17.

Lastly, Glocks are well known for dependability, especially in adverse conditions such as settings with a lot of sand or dirt.

The Colt M1911 is a legendary firearm within Delta Force weapons and gear.

The design of the sidearm has remained relatively unaltered since the M1911 was first introduced in 1911.

It was a welcomed introduction to the firearms market and the U.S. Army quickly inherited the pistol for its needs.

The stopping power of the Colt M1911 is important as .45 ACP rounds were groundbreaking at the time.

Additionally, the Colt M1911 is interchangeable with the M3A1 Grease Gun which helps keep it relevant even if most special operatives have adapted to something more modern.

Delta Force personnel often alter the presentation of the Colt M1911 with different accessories such as grips, sights, and trigger upgrades.

The Benelli M4 Super 90 is a popular choice when Delta Force needs to turn to the assistance of a powerful shotgun.

The semi-automatic weapon is the first gas-operated firearm produced by the Italian manufacturer Benelli.

It eliminates the need for more complex mechanisms that are traditional on most gas-actuated automatic weapons.

For this reason, Delta Force likes to rely on the Benelli M4 Super 90 for hostage rescue and special reconnaissance.

Like most of the Delta Force weapons and gear on the list, the M4 Super 90 can get reconfigured with many different settings.

Delta Force operators have the support of a talented team of gunsmiths that help personalize their weapons and gear.

In addition to having an arsenal of automatic rifles, shotguns, sniper rifles, and handguns – Delta Force is also trained on explosives.

The M203 grenade launcher is popular among special forces.

The single-shot 40 mm grenade launcher inflicts a ton of damage.

It’s versatile and compact for a grenade launcher as the weapon can mount to various rifles, including the M4 and M16.

There are also stand-alone variants of the M203 grenade launcher for Delta Force.

The M136 AT4 is an incredibly destructive rocket/missile launcher.

The AT4 packs serious punch with a single-shot 84 mm unguided missile that can destroy tanks and other infrastructure.

Despite its capabilities, the AT4 is fairly portable for a rocket launcher which is why it’s so popular among special forces.

It is one of the leading ways to take down a tank in the field or destroy any type of armored resistance.

While the M136 AT4 is generally ineffective against modern main battle tanks (MBT) it can take down just about anything else.

The FGM 148 Javelin is a slightly more modern version of the M136 AT4 with a stronger capability of taking down the latest tanks and armored vehicles.

As a result, it is a regular among Delta Force and other Army special units.

The Javelin consists of a disposable launcher tube along with the command launch unit (CLU).

The CLU features an optical viewer and infrared targeting for devastating consequences.

It has the ability to lock onto targets through heat thermal technology.

All in all, the FGM 148 Javelin is a “fire-and-forget” system which means once the missile is launched, the operator does not need to do anything to control or monitor its flight.

Delta Force operatives bring along a variety of other equipment in addition to their weapons.

For example, it is common to find night vision goggles, breaching materials, explosives, GPS devices, and other accessories on just about any type of mission.

Delta Force has an especially strong need for breachers given their hostage rescue and special reconnaissance demands.

Army Delta Force relies on everything from simple door charges to shotguns, hooligan tools, blowtorches, and chainsaws to penetrate a door.

Delta Force is arguably the most secretive special unit not only in the Army but the entire U.S. Armed Forces.

As a result, Army Delta Force keeps much of its information separate from the civilian world.

While it is rare to find legitimate photos of Delta Force online we have learned a little about their presentation over the decades.

Delta Force regularly wears camouflage since many of its missions involve special reconnaissance, hostage rescues, and other covert operations.

Delta Force camouflage is traditionally multi-color with different uniform variations depending on the details of a mission.

Army Delta Force generally conducts missions against high-value targets which makes the need to blend in all the more important.

Additionally, most members of Delta Force carry additional equipment and gear depending on the job.

Army Delta Force weapons and gear supplement operatives while they fight to keep the nation safe and protected.

The variety of weapons and gear allows Delta Force personnel to engage the enemy in many different ways.

Delta Force traditionally relies on the M4 assault rifle along with the HK416 Carbine and M3A1 Grease Gun.

Sniper rifles, shotguns, pistols, and explosives provide additional means for defense along with protective gear like camo and armor.

All these weapons and gear are necessary to continue and make Delta Force one of the most specialized and highly trained forces on the globe. 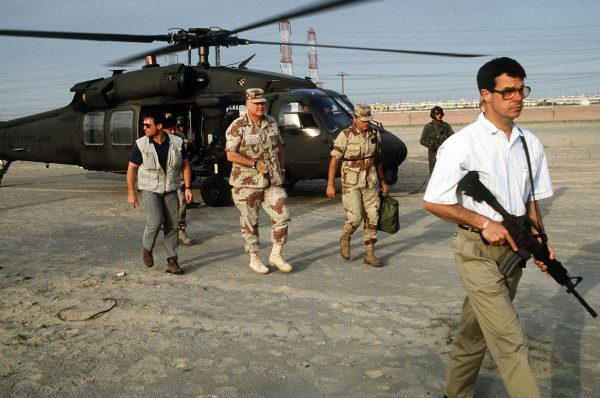