Army soldiers, no matter their rank, age, or gender, are required to take and pass the Army Combat Fitness Test (ACFT).

The ACFT is made up of six events, designed to test physical fitness and ability as a determining factor for combat readiness.

The sprint-drag-carry (SDC) is the fourth event of the ACFT.

During the sprint-drag-carry event, a soldier is tested on their physical ability to move quickly through five “shuttles.”

The goal is to perform each shuttle correctly in the shortest amount of time.

This event is an assessment of a soldier’s quickness, cardiac and muscle strength, endurance, and speed.

These abilities and movements are important for combat readiness. For example, a soldier may find the need to:

The SDC is the fourth of six overall ACFT events, taking place after the hand release push-up and before the leg tuck / plank events.

SDC is a field test requiring two 40-pound kettlebells and a 90-pound sled.

Description Of Each SDC Shuttle In Order:

Step 1 (Starting Position): – Assume the prone position with the top of your head behind the start line.

Step 2: Once you hear the command ‘Go!’ quickly stand up and sprint 25 meters down, and 25 meters back. Be sure to remain in your lane and touch the 25m line with your foot and hand before turning.

Step 3: Grab each of the sled’s strap handles. Move and pull the sled steadily backwards until the entire sled is over the 25m line; then turn around and do the same thing to cross the start line.

Step 4: Face one side for a lateral run for 25m, touch the 25m line with your foot and hand and then return to the start line facing the same direction. Do not cross your feet during laterals.

Step 5: Pick up a kettlebell in each hand and run to the 25m line. Step over the line with one foot and run back to the start line, holding the kettlebells at all times. If you drop one or both kettlebells, pick them up and continue.

The scoring system for the ACFT and its individual events is gender neutral.

This means that the scoring scale for each test, such as the sprint-drag-carry, is identical for males and females.

A soldier must correctly complete all five portions of the SDC event in exactly three minutes for a minimum passing score of 60 points.

If a soldier performs something incorrectly during the sprint-drag-carry event, the grader will call them back to the start and have them repeat the shuttle.

This counts against the soldier’s time for the test.

Here are some of the incorrect procedures that will result in a soldier having to repeat the shuttle:

Any score below 60 points for this particular test is considered below the Army minimum standard.

If a soldier fails to achieve the minimum of 60 points for SDC, they not only fail the individual test but the ACFT as a whole.

This means that the soldier will have to retake the entire ACFT to meet Army standards.

How Can I Prepare For The Sprint-Drag-Carry Test?

Training for the sprint-drag-carry test should include exercises to strengthen the body’s core and legs in addition to improving speed and conditioning.

There are ways that you can prepare for the SDC in order to get the best possible score on this test.

Some helpful preparatory exercises include:

Additional strategies to practice in preparation for this event are:

The sprint-drag-carry test mimics a soldier’s ability to quickly cover distances both while carrying or dragging heavy loads and while not carrying anything.

These actions may need to be performed effectively during combat or other operations.

Related Article – What To Bring To Army Basic Training

The sprint-drag-carry test is part of the ACFT’s overall purpose in a soldier’s military training for combat readiness.

Some jobs and/or units in the Army may have varying minimum requirements for passing this test.

Ultimately, the SDC event is designed to measure a soldier’s strength, agility, endurance, and anaerobic capacity.

Meeting the passing standards for this test, and the ACFT as a whole, indicates that a soldier is physically fit, able to properly fulfill their job duties, and dedicated to their training and readiness. 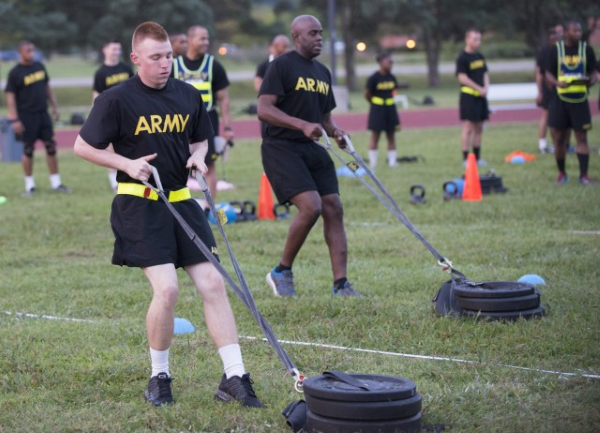 The Sprint Drag Carry is the 4th event in the Army's Combat Fitness Test, or ACFT. Learn more about the test, including how it's scored, how to prepare, and more.