The U.S. military awards prestigious medals to recognize valor, heroism, and meritorious service (going above and beyond the call of duty) in combat conditions.

In addition, military members can earn medals for acts of non-combat heroism, campaign, expeditionary, and service.

Military medals can be awarded by the U.S. Congress, Department of Defense, and even by each individual military branch: Army, Navy, Marine Corps, Air Force, Coast Guard.

Since there is an order of precedence to these awards, here are the top 15 military medals ranked in descending order.

The Purple Heart is a military medal that dates back to 1782, originally a heart-shaped piece of cloth.

During the American Revolution, George Washington created this heart-shaped Badge of Military Merit to recognize enlisted soldiers for extraordinary gallantry and/or fidelity.

However, it wasn’t until 1932 that President Herbert Hoover reinstated Washington’s badge design as the Purple Heart.

This decision came about in part due to the many service members wounded during World War I who had received the Army Wound Ribbon.

The intention was to officially establish a military medal to be awarded for merit or receiving wounds in action against an opposing military force.

In 1942, the War Department officially designated the Purple Heart medal for those U.S. military members wounded or killed in combat.

This indicates their valor in the line of duty and honors their bravery.

The Purple Heart is ranked behind the Bronze Star and ahead of the Defense Meritorious Service Medal in order of precedence.

The Bronze Star is awarded by the military to service members who have displayed heroism and valor, excluding aerial flight.

Authorized in 1944 as a ground equivalent of the Air Medal, the Bronze Star can be presented for valor or meritorious service.

This means that service members can earn a Bronze Star for military actions that are not associated with valor.

However, in instances of valor, the Department of Defense recognizes this by bestowing a “V” device to be worn as part of the Bronze Star.

Military members may distinguish themselves by receiving the Bronze Star with heroic or meritorious service while:

Non-Combat Heroism medals were established to recognize heroism and meritorious service that takes place other than on the battlefield.

These awards are meant specifically for service member actions that did not happen in combat.

Non-Combat Heroism medals are part of the Personal Decoration class.

They can be awarded to members of the Army, Air Force, Navy, Marine Corps, and Coast Guard.

The Soldier’s Medal was established by Congress in 1926 and is awarded to Army personnel who have risked their life in service that does not involve combat and/or conflict.

In 2001, 28 service members received the Soldier’s Medal for risking their lives in action to assist fellow soldiers following the terrorist attack on the Pentagon.

The Navy and Marine Corps Medal is awarded for voluntary, life-endangering acts in service to the nation.

This medal was first bestowed during World War II, and is of a higher prestige than the Silver or Gold Lifesaving Medal.

President John F. Kennedy was awarded this medal while serving as commanding officer of Motor Torpedo Boat PT-109 during WWII.

The Airman’s Medal is bestowed in honor of those that heroically risk their lives to save others or in service to the country that does not involve actual combat.

This medal can be awarded to a member of the Air Force, any other branch of the Armed Forces, or friendly nation while serving in any capacity with the U.S. Air Force.

The Coast Guard medal is a military decoration given to members serving in capacity with the U.S. Coast Guard that distinguish themselves through acts of heroism not involving actual enemy conflict.

The act of heroism must be voluntary and at great personal risk or danger, to stand out distinctly beyond normal expectation.

In 1926, the Air Corps Act established the Distinguished Flying Cross medal to recognize heroism and/or extraordinary achievement for actions in aerial flight.

The first recipient of the Distinguished Flying Cross medal was Captain Charles A. Lindbergh of the Army Air Corps Reserve.

In 1927, President Calvin Coolidge signed an executive order that stopped the military from awarding the Distinguished Flying Cross to civilians.

Therefore, Amelia Earhart was the last civilian to receive this medal.

The Distinguished Flying Cross is the highest award for extraordinary aerial achievement.

It ranks fourth in order of precedence as a valor decoration, awarded to those who have shown heroism while participating in aerial flight.

The Defense Superior Service Medal (DSSM) is awarded by the Department of Defense as a senior U.S. military decoration.

It is bestowed upon Armed Forces members to recognize exceptionally superior service and honor a person’s accomplishments across a sustained period of time.

The DSSM is frequently presented in the name of the Secretary of Defense to senior flag officers and general officer grades.

The Defense Superior Service Medal is comparable to the Legion of Merit, though it is awarded for service in “joint” duty capacity.

The Legion of Merit is generally awarded to senior officers in command or high staff positions in their respective services.

However, it can also be awarded to officers of lesser rank as well as senior enlisted members, though less frequently.

The Legion of Merit honors exceptionally meritorious conduct in performance of outstanding services and achievements.

It is unique for these reasons:

The Silver Star is the third-highest military combat decoration that can be awarded to a U.S. Armed Forces member for meritorious service and “gallantry in action against an opposing armed force” (DOD).

Though the Silver Star is the third-highest award exclusively for military operations involving conflict, it ranks fifth in the precedence of military medals.

This award grew from small stars called the Army’s Citation Star and the Navy Commendation Star, which were worn on the ribbons of other campaign decorations.

The Silver Star replaced the citation and commendation stars in 1932.

However, the original medal design is at the center of the Silver Star.

The Silver Star is the highest award for combat valor that is not awarded by a specific branch of service.

In fact, it has been received by members of the Army, Navy, Marine Corps, Air Force, Coast Guard, and Merchant Marines.

The Silver Star can be given by any of the branches to their own members as well as members or other branches, foreign allies, and civilians in support of U.S. military combat missions.

These medals are awarded for exceptionally meritorious service to the U.S. government in a duty of great responsibility.

Such duty can represent service outside of war.

However, during time of peace, there must be evidence of a distinct, significant achievement of meritorious service.

In addition, this service must be of great importance in order to earn a Distinguished Service Medal.

Awarded by the Department of Defense (DOD), the Defense Distinguished Service Medal is a military decoration presented to Armed Forces members for exceptionally distinguished performance of duty.

This duty includes contributing to the national security or defense of the U.S.

In addition, this medal is the DOD’s highest non-combat related military award and the highest joint service decoration.

It is awarded only while assigned to joint activity, usually held by the most senior officers such as:

The medal can also be awarded to other service members for exceptional contributions in value and scope to national security or defense.

The Distinguished Service Cross, The Navy Cross, And The Air Force Cross

This grouping of medals, based on military branch, represents the second-highest military decoration awarded by the U.S. Armed Forces.

Service crosses are awarded by military branches for “extraordinary heroism in connection with military operations against an opposing armed force.”

This is per the Department of Defense.

The three variations of service crosses include:

This medal is the second-highest award bestowed by the U.S. Army.

It is given for valor and heroism in combat, but below the Medal of Honor.

The Distinguished Service Cross was first awarded during World War I.

However, many awards were created for actions by the Army before WWI such as the Certificate of Merit for gallantry.

The Navy Cross is given for extraordinary heroism in combat, in which Medal of Honor merits are not reached.

Since 1942, this medal has been awarded to service members of the Navy, Marines, and Coast Guard at an elevated status just below the Medal of Honor.

When the Air Force became a separate entity, this award was established for personnel that showed extraordinary heroism in combat.

The first Air Force Cross was awarded posthumously in 1962.

1. The Medal Of Honor

Also referred to sometimes as the Congressional Medal of Honor, the Medal of Honor is the highest military award that a service member can receive.

This award is presented to recipients by the President of the United States in the name of Congress at a formal ceremony in Washington, D.C.

Service members may only receive this medal by distinguishing themselves “through conspicuous gallantry and intrepidity at the risk of life above and beyond the call of duty” (Department of Defense).

There are variations of the Medal of Honor for three different branches of the U.S. Armed Forces.

The version for the Navy was the original Medal of Honor, established in 1861, and now entails the Navy, Coast Guard, and Marine Corps.

The Army version was created in 1862, and the Air Force variation was established in 1965.

To date, there have been 3,493 recipients of this highest military award. 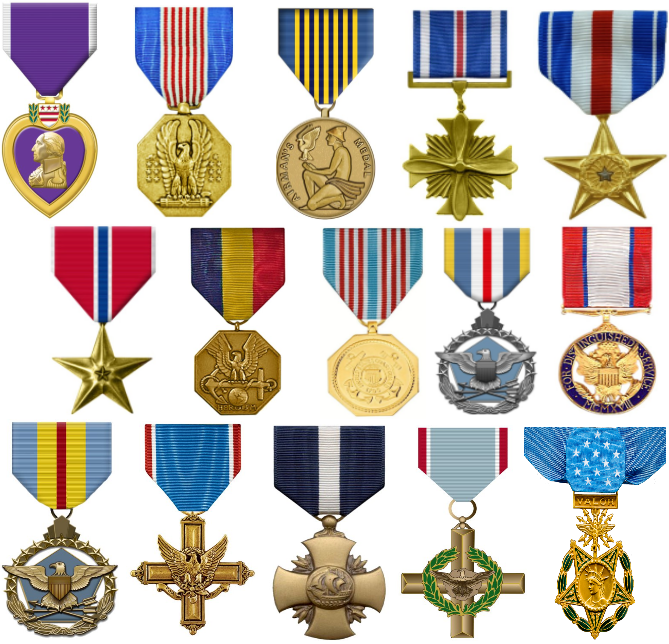 Learn more about the military medal rankings in order of precedence, as well as a detailed description for each award.