Just like Air Force missions and tactics change over the years, so do the building, road, runway and other physical structure requirements on bases.

Air Force bases need structural changes for such reasons as modernization, security, and changes in force structure and manning.

That’s why the Air Force needs many engineers to help plan, budget, construct, and oversee the building of base facilities, roads, and other structures.

As an 3E5X1, Air Force engineers must wear many hats to make this all happen.

One day they might be on the computer doing CAD drawings and the next day be at a building site talking to a contractor.

Not much gets done on an Air Force base as far as physical changes are concerned without an Air Force Engineer being involved in some way, shape or form.

It’s an important Air Force position that comes with much responsibility.

3E5X1 is an Air Force specialty that also offers many civilian employment opportunities when those that do it leave the service.

Here are the preliminary requirements that one must fulfill before they undertake training to become an Air Force Engineer.

• Minimum ASVAB Score of 49 in the general category

• Be between the ages of 17 and 39
• Possess a GED or high school diploma
• Have a general knowledge of computer operations, software applications, and mathematics
• Possession of a valid driver’s license so one can be approved to operate government motor vehicles
• Normal color vision
• Be able to lift 50 lbs.
• Successful completion of 8.5 weeks of Air Force Basic Military Training held at Joint Base Lackland in San Antonio, TX (Not required of those with prior military experience or training)
• Some Air Force Engineering jobs may require completion of a current Single Scope Background Investigation (SSBI) that leads to the ability of an Airman to be granted access to Secret or higher-level material

Here are the initial training steps it takes in order for a recruit to perform the duties expected of them as an Air Force Engineer in the field.

The technical training required for an 3E5X1 takes 2 ½ months to complete.

It’s done in conjunction with other branches of the service and takes place at Ft Leonard Wood.

This large Army base is located near St. Roberts in the Ozark Mountain region of Missouri.

This military technical training course will lay the foundation for the knowledge required to be an Air Force Engineer.

They will learn such core engineering skills as surveying, CAD drawing, blueprint reading, and materials testing.

New recruits will also learn how to handle engineering requests, fill out related forms and how to requisition materials.

They will also be taught the strict safety standards that the US Air Force expects their many engineers to adhere to.

On the Job Training

This is a very broad Air Force career field that touches upon many different areas.

That’s why technical training cannot begin to get into the specifics of the engineering duties that each new airman will perform when they arrive at their first permanent duty station.

This means that each new Air Force Engineer can expect several months of hands-on training when they get to their next base.

It will be training that will be conducted by superiors that have many years working as engineers in the US Air Force.

This on the job training period will also be focused on the specific tasks that the newly trained Air Force Engineer will be doing at their new duty assignment.

How Much Are Air Force Engineers (3E5X1) Paid?

As with all military enlisted positions, a new Air Force Engineer’s base pay will be determined by rank and time in service.

Those without prior military experience or other relevant career-related experience will most likely be initially classified as an Airman Basic (E-1).

New Air Force personnel with construction experience or other relevant training may start out at the rank of Airman (E-2) or Airman First Class (E-3).

Other forms of pay and incentives that a new recruit may receive include such things as:

All health care requirements for Air Force enlisted members are always 100% covered too.

Here is a list of the duties that a new Airman will be expected to perform while serving as an 3E5X1:

• Perform various duties that center around drafting such as interpreting rough engineering sketches, CAD design, and blueprint readings.
• Aid in the production of several different types of working drawings such as architectural, civil, mechanical, structural, and electrical drawings.
• Do many tasks that are associated with surveying which may include such things as site location, construction, and mapping surveys.
• Air Force engineers must be able to collect, convert, and present the field survey data that they generate for engineering projects.
• Must have a good working knowledge of GPS systems and how they relate to surveying instruments and the data derived from them.
• Have a good understanding of geographic information systems (GIS)and how they help produce maps when using a standard GIS interface.
• Oversee base construction projects and act as a liaison between base contractors, support personnel, and commanders during construction projects.
• Coordinate, evaluate, monitor, and document those contracted activities that fall under their area of responsibility.
• Make recommendations for modifications that are necessary for ongoing projects.
• Conduct contractor acceptance inspections during different phases of ongoing projects to include final inspections.
• Have the ability to take soil, asphalt, and concrete samples and then interpret the collected data.
• Support base contingency operations by helping to develop plans to do such things as house TDY personnel, aircraft, munitions, and other support equipment in times of crisis.
• Some Air Force Engineers will be tasked with such duties as maintaining and evaluating runway pavements, runway markers, navigational aids, and safety arresting devices.
• In the event of war, Air Force Engineers must be familiar with ways to quickly repair runways and perform other recovery operations after base facilities have been damaged.

There can be some frequent temporary duty travel with this Air Force specialty, but other than that it’s not a bad Air Force job to have if you are raising a family.

Here is what some current Air Force Engineers had to say about their time spent in the service doing this job. 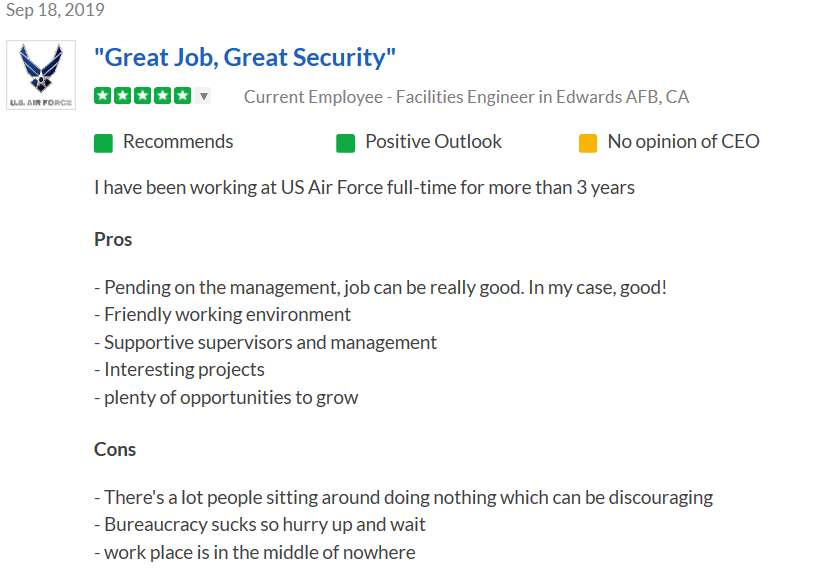 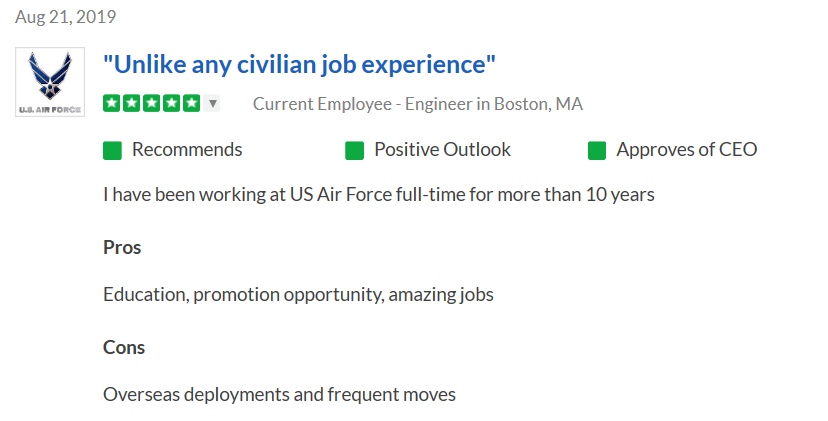 The training that Air Force Engineers receive while in the service will most likely transfer very easily into employment opportunities in the civilian world.

Here are some of the types of civilian jobs that those with relevant Air Force engineering experience should be candidates for: