Sadly, plane crashes are part of the military despite the U.S. Armed Forces offering the very best in aviation.

Military plane crashes have occurred during training exercises as well as in combat.

Consequently, servicemen have lost their lives in various conflicts including Japan and Vietnam.

What are the 15 worst military plane crashes of all-time?

Unfortunately, military plane crashes have occurred in the past, and continue to happen.

For starters, there are a multitude of mechanical failures and other issues that can cause a military plane to go down at any moment.


Moreover, several other types of military plane crashes occur during times of conflict, per the norm.

As such, pilots in the U.S. military face obvious dangers on the battlefield along with during traditional/normal operations.

Since the 1950s, there have been several notable military plane crashes, including:

Military plane crashes occur in all types and forms.

The Arrow Air Flight 1285R incident is far and away the most devastating military plane crash in U.S. history.

It was an international charter flight that was transporting U.S. Army personnel from Cairo, Egypt to their home base at Fort Campbell (Kentucky).

It crashed shortly after takeoff on the morning of December 12, 1985.

The horrible plane crash claimed the lives of all 248 passengers on board, as well as 8 crew members.

Currently, it remains the deadliest aviation accident to take place in Canada.

Additionally, it’s the second deadliest incident of all-time, only behind the Nigeria Airways Flight 2120 crash.

The 1968 incident ranks among the deadliest military plane crashes in U.S. history.

Moreover, it’s also the deadliest aviation incident that occurred during the Vietnam War.

The U.S. Air Force Lockheed C-130B Hercules was participating in the evacuation of South Vietnamese civilians during the Battle of Kham Duc.

Tragically, everyone on board the C-130 Hercules was killed, including 183 Vietnamese civilians and 6 servicemen.

It’s not the first military plane crash that have involved in a C-130 Hercules.

In fact, more than 15% of C-130 Hercules crashed or were loss during the Vietnam War.

In 1975, a Lockheed C-5A Galaxy participating in Operation Babylift, crashed during an emergency landing.

The tragedy occurred at the landing strip of Tan Son Nhut Air Base in South Vietnam.

Later, the cause of the plane crash was connected to loss of flight control due to structural failure and explosive decompression.

It was the first fatal crash involving a C-5 Galaxy as well as one of the deadliest military plane crashes in Vietnam.

The air disaster occurred during the summer of 1953 during which a Douglas C-124 departed from Tachikawa, Japan.

However, 3 minutes later the military plane went down and killed all 129 people on board.

It was the deadliest military plane crash in U.S. history for over a decade until the Kham Duc shootdown in 1968.

At the time, it was the deadliest military plane crash in history.

Of the 115 people on board the military transport aircraft, 87 perished.

What’s even more depressing is the transport plane was part of “Operation: Sleigh Ride” which was designed to bring servicemen from the Korean War home for Christmas.

Nonetheless, seconds after taking off, the C-124’s left wing struck the ground, cartwheeled, and exploded causing the disaster.

The Fairchild C-123B military plane crash was another terrible incident to occur during the Vietnam War.

The events are not as well documented as other military plane crashes yet remains significant.

In fact, there were several military planes crashes that occurred during the era involving C-123 aircraft.

However, the incident on December 11, 1965 ranks among the worst.

The C-123 was en route to Tuy Hoa Air Base when the aircraft struck trees over the top of a ridge and caused it to spin out of control.

The Boeing C-135 military plane crash is often connected to the Fairchild C-123 incident, since both crashes happened the same year (with comparable fatalities).

During this incident, the C-135A aircraft was transporting Marine Corps personnel from MCAS El Toro to Okinawa.

However, poor weather conditions resulted in takeoff being delayed until the night hours.

Then, after takeoff, the pilot failed to make a prescribed left turn and instead collided into Loma Ridge, directly ahead.

The contact sent pieces of the airplane flying in all directions as well as burst into flames.

As a result, 12 crew members and 72 other personnel on board the C-135 lost their lives.

The tragedy occurred near the conclusion of World War II and was among the deadliest at the time.

A B-24 Liberator was taking part in a training exercise when the pilot suddenly became overwhelmed by poor weather conditions.

For this reason, the B-24 aircraft went down and crashed into the village of Freckleton, England.

The incident left 3 servicemen dead along with 58 individuals on the ground.

In 1952, a Douglas C-124 Globemaster II was transporting military personnel over Alaska.

Unfortunately, the military transport plane crashed into Mount Gannett, a peak within the Chugach Mountains.

Consequently, all 52 people on board the C-124 aircraft were killed in the accident.

A B-25 Mitchell Bomber was partaking in a routine flight from Massachusetts to New Jersey during the summer of 1945.

However, thick fog enveloped the military plane and caused it to crash in the world’s tallest building at the time – the Empire State Building in NYC.

The devastating military plane crash resulted in the 10-ton aircraft colliding against the north side of the skyscraper, between the 78th and 80th floors.

The collision caused massive wreckage yet firefighters were able to distinguish the fire before it got worst.

Nonetheless, 3 servicemen aboard the bomber and 11 others perished during the incident.

In 2001, when terrorists deliberately flew 2 airlines into the World Trade Center (more information, below), those that were old enough to recall the B-25 crash immediately compared it to the incident.

There are many horrible events that have occurred outside the U.S. military.

For example, many of the worst military plane crashes in history involve aircraft that was operated by another military force (i.e. 2003 Iran Ilyushin II-76 Crash).

Thus, here are some of the worst non-military related plane crashes in U.S. history that contributed to military involvement:

American Airlines Flight 11 was the first flight involved in the September 11 attacks.

For this reason, this flight (and the 3 others, more information below) are affiliated with the military since 9/11 triggered a reaction.

The War in Afghanistan and Operation Iraqi Freedom were both a response because of the 9/11 attacks.

The first plane to crash in the World Trade Center – American Airlines Flight 11 – claimed the lives of the 87 passengers on board.

Meanwhile, countless more were injured on a day that claimed nearly 3,000 lives.

United Airlines Flight 175 was the second plane to crash into the World Trade Center on 9/11.

The Boeing 767, like American Airlines Flight 11 was destined for Los Angeles yet never made it far.

A group of hijackers took control of the plane and redirected the flight toward the twin towers, killing all 60 people on board (and the 5 terrorists).

Within two hours, both towers of the World Trade Center collapsed contributing to the deadliest terrorist attack in world history.

The third plane, American Airlines Flight 77, crashed into the Pentagon.

The flight had departed that morning from Newark International Airport and was en route to San Francisco.

However, it switched directions after the cockpit was overtaken by al-Qaeda terrorists.

The crash resulted in the death of all 59 civilians on board along with the 5 terrorists.

The impact of the Boeing 757 also killed 125 people within the Pentagon.

United Flight 93 was the last of the 4 commercial planes involved in the 9/11 attacks.

It remains the most mysterious after crashing into an empty field in Somerset County, Pennsylvania.

Authorities believe that hijackers were attempting to target The White House or U.S. Capitol in Washington, D.C.

However, the plane never made it there as brave passengers and crew members stormed the cockpit.

It’s believed that their heroism saved the lives of countless Americans.

Nevertheless, all 44 people aboard United Flight 93 perished in the aftermath of the crash.

All in all, the 4 plane crashes associated with September 11 claimed the lives of 265 Americans (including 8 children).

In total, nearly 3,000 people died that day along with an indeterminate number of injuries.

The Reno Air Races, like most air shows and other aviation events, are designed to entertain and have a good time.

Nevertheless, these events can also turn tragic as was the case in 2011 at the Reno Air Races.

When “The Galloping Ghost” made a tight turn around a pylon, it suddenly pitched up at 17 Gs in acceleration.

The extreme pitch incapacitated Leeward which caused the military aircraft to roll then nose-dive toward the crowd.

Today, the Reno Air Races disaster is an example of what can go wrong at an air show.

The tragedy claimed the life of the pilot along with 10 speculators.

Additionally, more than 60 others were injured during the incident.

The worst military plane crashes of all-time are gruesome and difficult to comprehend.

Nonetheless, it does come with the territory of operating something as powerful as military aircraft.

Thankfully, many of these instances have occurred long ago in the past.

However, with September 11th and other recent episodes serving as an example, devastating plane crashes occur all the time.

Thus, it’s important to honor and remember the lives lost, including all the courageous pilots that take a risk every time they board their aircraft. 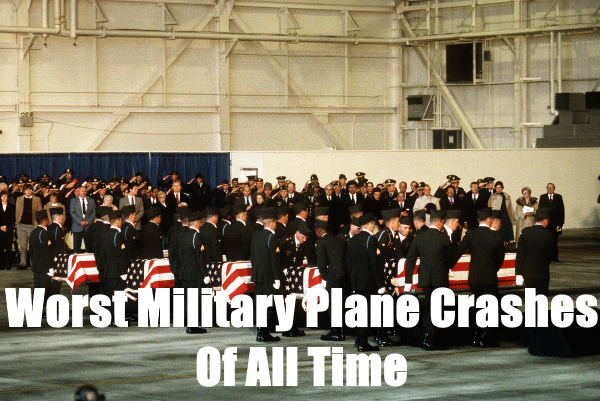 Our list of the 10 worst military plane crashes of all time includes some of the worst accidents in US military history.