No matter what weapon system you are employing, the four Marine Corps weapons safety rules can be applied.

Firearms are dangerous and need to be respected to keep yourself and those around you safe from accidents.

Those who do not respect their weapon are more likely to have a negligent discharge.

Risk management and safety are top priorities for Marine Corps leadership, and they strive to mitigate risk whenever possible.

The 4 USMC Weapons safety rules are designed to mitigate risk and lower the chances of injury and death due to negligent discharges.

If they violate any of them, they will be corrected and may be removed from the range for being a safety violator.

Below are the 4 USMC weapons safety rules:

#1. Treat every weapon as if it were loaded
#2. Never point a weapon at anything you do not intend to shoot
#3.  Keep your finger straight and off the trigger until you’re ready to fire
#4. Keep the weapon on safe until you intend to fire

Let’s go into a more detailed discussion on each one of these weapons safety rules to give you a better understanding.

#1. Treat Every Weapon as If It Were Loaded

The first weapons safety rule is to treat every weapon as if it were loaded.

This safety rule was created to ensure that Marines stay alert while handling weapon systems.

When Marines are careless, mishaps may happen, and they could lead to death or injury.

Weapons may not have been cleared properly and still have a live round in the chamber.

By treating every weapon as if it were loaded, Marines can avoid negligent discharges and keep those around them safe.

Weapons must always be checked to see if it is loaded every single time it changes hands.

It is a Marine’s responsibility to ensure that it is unloaded and clear.

They will not accept verbal confirmation on the state of a weapon without physically verifying it themselves.

To properly pass a weapon, a Marine will clear it, look in the chamber, verbally state clear, and the other Marine will do the same after they take control of the weapon.

#2. Never Point a Weapon at Anything You Do Not Intend to Shoot

The second weapons safety rule is to never point a weapon at anything you do not intend to shoot.

If your weapon is loaded or has no rounds in the chamber, the second safety rule applies.

This safety rule is about muzzle awareness, and when it is kept, even if there is a negligent discharge, no one will be harmed.

Much like the first safety rule, it is about keeping the Marine responsible and vigilant to ensure that they are as safe as possible.

This safety rule especially applies to when a Marine is in condition one (bolt forward and round in the chamber) while on the range or in a combat scenario.

There are training events that will require Marines will point their weapons at training combatants.

Some exercises will have Marines use simulation rounds which are like 5.62mm paintball rounds.

Simulation rounds are still projectiles and can still injure a person if misused due to their velocity.

Other events use blank rounds where an adapter is placed in the barrel to prevent projectiles.

During these training events, weapons are cleared before use and afterward to ensure the weapon is clear.

In a combat environment, a Marine will ensure that they have positive identification of their target before engaging as part of their rules of engagement.

#3. Keep Your Finger Straight and Off the Trigger Until You’re Ready to Fire

The third USMC weapons safety rule is to keep your finger straight and off the trigger until you’re ready to fire.

It is simple, if your finger is not on the trigger, you can not fire the weapon.

Marines are constantly moving through obstacles, conducting drills, or moving to an objective.

It could be easy to accidentally hit the safety of a weapon and set it on fire.

A negligent discharge may occur if a Marine accidentally pulls the trigger while a weapon is unknowingly on fire.

Finger disciple may seem like a basic task at first, but for those who have formed bad habits over the years, it may be a hard one to break since it feels natural.

By having your trigger finger extended on the slide or frame, you are ensuring weapon disciple.

#4. Keep the Weapon on Safe Until You Intend to Fire

The fourth weapons safety rule is to keep the weapon on safe until you intend to fire.

Depending on the weapon system that is being used, the safety will be different.

For example, on an M16A4 or M4A1, the safety switch can be quickly accessed by a right-handed shooter’s right thumb, but for an M249 squad automatic weapon, it has a push safety.

It is essential to know where the safety is located on any weapon system used for maximum safety.

Some weapons have multiple safeties that need to be engaged to fire the weapon.

This is the case for pistols like the Springfield XD9, where the pistol has a safety lever, a grip safety, and a trigger safety.

If one of the three safeties is not engaged, the pistol will not fire.

If all else fails, if the safety is on, there is no chance for a mishap.

Negligent discharges can cause serious harm, damage, or death to Marines and property, and the best way to combat them is by adhering to the 4 USMC weapons safety rules.

The 4 rules are the core concepts to keeping Marines safe and can be used for anyone who is hunting or at the range.

It is essential to understand that you are the one who is responsible for weapons safety and careless can kill.

Even if you do not hit someone directly in front of you, it is possible that the round can go through a wall.

There are other things to consider when thinking about safety, such as knowing the weapon system being fired, its capabilities, and where the safety is located.

It is essential to become familiar with all the weapon safety rules by memorizing them and using repetition during practical application.

Over time it will become second nature for those who had to break bad habits. 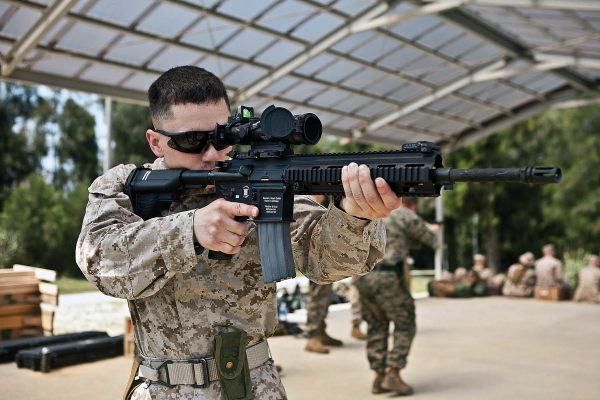 The Marine Corps 4 weapons safety rules and conditions are put in place to make sure there aren't any accidental discharges, as well as help with risk management.