The United States Marine Corps is not only highly prestigious but very misunderstood.

There is perhaps no other branch of the U.S. Armed Forces that has more urban myths and stereotypes linked to it.

In fact, one of the biggest misconceptions tied to the Marines is that it’s not for females.

Quite the contrary, as there were more than 600 females serving the Marines in previously all-male units in 2019.

The United States Marine Corps report an increase of 60% since the military branch became more inclusive in 2018.

Are you interested in serving the U.S. Marines as a female?

Learn more about the top-recommended female Marine jobs by reading the full article below.

The United States Marine Corps currently lists more than 120 Military Occupational Specialties (MOS), all of which are open to females.

Marine MOS fields range from Personnel and Administration, Intelligence, Logistics, Communications, and so much more.

All of these military specialties are open to females and the branch has witnessed a spike in enrollment over the last several years.

While there is not a single occupation that women cannot serve in the U.S. Marines, one of the highest recommended is Marine Cybersecurity Technician (MOS 0688).

It really shouldn’t be a surprise to anyone that the future of fighting crime and handling foreign policy is through digital technology.

As a result, Marine Cybersecurity Technician (MOS 0688) is one of the most thriving positions in the military branch.

These service members are at the “front line” of the battlefield on the web.

They work diligently to secure the communications networks of the Marine Corps.

Furthermore, the career path has a phenomenal civilian outlook as cybersecurity jobs are in high demand and pay extremely well.

There are some requirements for attaining MOS 0688.

First, the position is only open to the rank of sergeant and higher so it’s not an entry-level position.

Nonetheless, after completing a couple of years of service (along with the Information Assurance Technician Course in California) and you are well on your way.

The military career does require top-secret military clearance so you will want to make sure your background check doesn’t have any serious red flags.

It is a good idea to consider enlisting in MOS 0651, MOS 0656, or MOS 0659 for consideration of Marine Cybersecurity Technician (MOS 0688) after a couple of years of service.

Fiscal / Budget Technicians serve as bookkeepers and accountants for the U.S. Marine Corps.

There are many positions of advancement for an entry-level military role that does not have a ton of pre-requisites (like other Military Occupational Specialties).

Resource Analysts also have the task of preparing financial reports, overseeing the ledger, and other accounting tasks.

New recruits must achieve a score of 100 or higher on the General Technical (GT) of the Armed Services Vocational Aptitude Battery (ASVAB).

Moreover, the U.S. Marines require that individuals serving MOS 3451 quality for secret security clearance from the Department of Defense.

The Department of Defense can get rather invasive with this procedure, scouring personal records for how you’ve managed finances in the past along with the personal character.

Civilian companies are known to take an interest in Marine Fiscal Technicians once they leave the military.

If you can manage a budget as large as the United States Marines it will garner the attention of many prominent corporations.

The traditional front-line soldier in the military (while still important) is gradually being replaced by digital soldiers on the internet.

Consequently, Marine Counter Intelligence / Human Intelligence (MOS 0211) positions are in high demand and can earn you a stellar reputation within the ranks.

More and more foreign affairs are being combated through the digital medium which makes the role of Marine Corps MOS 0211 so vital.

As a result, Marine Counter Intelligence / Human Intelligence (MOS 0211) is not only one of the best female Marine jobs but among the most desirable overall.

The Marine Corps Intelligence Community utilizes voices throughout its network to remain a step ahead of foreign adversaries.

For this reason, Intelligence personal (MOS 0211) identifies as well as addresses hostile combatants and foreign intelligence organizations seeking to infiltrate the U.S. government.

In terms of preparation, it does serve you well to learn and specialize in a foreign language.

As a result, the intelligence gathered from MOS 0211 personnel is instrumental in the planning and coordination of air, ground, and special operation missions within the U.S. Marines.

There are numerous requirements necessary to perform the duties of Marine Corps MOS 0211.

The position is open to the rank of corporal or sergeant.

Secondly, Marines must pass an interview and receive a recommendation from CI/HUMINT personnel.

Marines must perform well on the ASVAB (GT score of 100 or higher) as well as pass a polygraph test.

Thirdly, Marines need to pass the Defense Language Aptitude Battery (DLAB) and receive top-secret clearance from the Department of Defense.

While the requirements for joining Marines MOS 0211 are demanding, it’s well worth it for eligible female recruits.

The position has tremendous potential and the ability to assist the Marine Corps moving forward.

Consequently, it is easy to understand why MOS 0211 is one of the top recommended female Marine jobs available.

The Marine Corps not only depends on these supplies but on the correct order.

These individuals are trained in Automated Information Systems (AIS), the inventory model for the U.S. Marines.

Marines use AIS to account, track, and interface movement data along with load-planning software.

While it may look simple to load aircraft and massive ships there is actually much that must go right in order to avoid a disaster.

For this reason, Marine Logistics Specialists assist in every stage of preparation from planning to execution.

Marine Logistics / Mobility Chiefs (MOS 0491) must receive a score of General Technical (GT) 100 or higher on the ASVAB.

Marine MOS 0491 is only open to individuals that earn secret security clearance from the Department of Defense (expect an intensive background investigation).

Cyberspace Operations Chiefs are deemed senior staff for non-commission officers that are directly connected to the Cyberspace Officer.

Fort his reason, you not only are connected to the latest technology but also the organization leaders of the department.

Cyberspace Chiefs have extensive information on the Joint Operational Planning Process within the Marine Corps.

As a result, they can develop or assist with the creation of detailed plans and orders to combat cyber attacks.

Furthermore, they are tasked with understanding the complex Defense Information Network (DODIN) Operations and Cybersecurity system.

There are many opportunities to progress if you demonstrate the understanding and instinct to combat cyber attacks.

Cyberspace operations are the future of military organizations as they move online to fight future attacks.

You will not only achieve an impressive reputation within the Marine Corps but have the portfolio to earn major bucks in the civilian world once your time in the military concludes.

The best female Marine jobs include opportunities in cybersecurity, logistics, and financials.

The Marine Corps has become much more open-minded to female recruits in the last several years.

As a result, women are earning titles and reputation within the branch that was previously not available.

Whether you want to work on the traditional front-lines as a Marine, or behind-the-scenes in cybersecurity – opportunities await.

While these 5 positions are among the best female Marine jobs, it is not just limited to these opportunities.

Women can achieve anything and are proving so in the 21st century serving the U.S. Marine Corps. 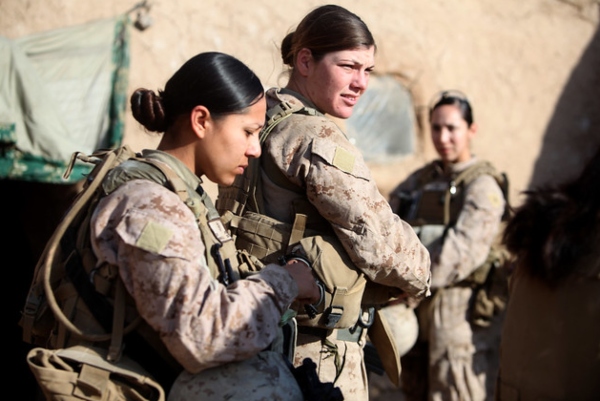 Check out our list of the 5 best jobs for women serving in the US Marine Corps, including cybersecurity, counter-intelligence, logistics and mobility, and more.