To best understand the Air Force Promotion Timeline, you need to know how rank is categorized in the Air Force.

The Airman level is E-1 through E-4 with the letter ‘E’ meaning enlisted.

Also, a level of E-5 and E-6 is the Non-Commissioned Officer (NCO) level.

E-7 through E-9 are known as Senior Non-Commissioned Officers.

Afterward, the officer level is O-1 through O-9.

Also, some promotions are automatic, while others take effort and accomplishments into consideration.

It is essential to know promotion in the Air Force is dependent upon many factors, including skill level.

Also, the skill level relates to the level of skill gained in on-the-job training.

Furthermore, the skill level typically corresponds to the rank itself.

For example, If you are awarded a three-level, you are eligible to become an Airman First Class.

How does Time in Service (TIS) and Time in Grade (TIG) impact promotions?

Time in Service (TIS) is the amount of time spent in the Air Force. This date starts from the day you went to basic training.

Also, Time in Grade (TIF) is the amount of time spent in your current rank.

There are four levels of airmen.

First, unless you have earned an advanced rank, everyone enters the Air force as an Airman Basic (E-1).

Next, after six months of TIG, you automatically advance to Airman (E-2).

Furthermore, to become an Airman First Class (E-03), you need 10 months of TIG.

However, if you initially enlist for six years, you will receive your E-3 designation after completing technical training.

Also, For promotion to E-4, Senior Airman, you need 24 months of TIG.

While the promotions through Airman are automatic, there is more to consider for further promotions.

Promotion from Senior Airman to Staff Sergeant requires you to go through a size week leadership school and a course of professional military education before promotion.

Furthermore, Staff Sergeant needs three years of TIS, six months of TIG, and have a skill level of 5.

Also, there is a rating system where Senior Airman gather points for promotion over five factors:

To promote from a Staff Sergeant to a Technical Sergeant, you must have 23 months TIG.

Also, to become a Technical Sergeant, you face the same rating system before consideration for promotion and a skill level of seven.

The rank of Master Sergeant promotion requires a skill level of seven.

Also, this promotion is the same as moving from a Staff Sergeant and Technical Sergeant, but it requires eight years of TIS and two wears of TIG.

The promotion o this rank is highly competitive because public law state only 2 percent of the force may be in the Grade of E-8.

Therefore, for promotion, you must have 11 years of TIS and 20 months of TIG.

The promotion board discusses potential promotions.

Also, these promotions are scored based on performance, competence, leadership, responsibilities, achievements, and level of education.

Chief Master Sergeant (E-9) is the highest of the enlisted ranks and is also competitive.

There are regular opportunities for Air Force Officers, as well.

The rank of Second Lieutenant is the lowest offer crank in the commissioned officer classification.

Also, there are several paths to becoming an Officer in the Air Force.

These paths include college ROTC programs, attending the Air Force Academy, attending Officer training school after college, or working through the enlisted ranks.

First Lieutenant, Captain, and Major, and Beyond

To move from Second Lieutenant to First Lieutenant, you will need 24 months TIG.

The promotion to Captain requires 24 months of TIG, as well.

Also, to become a Major or any rank beyond, there is a highly competitive set of selection criteria.

We addressed some frequency asked questions to help make the promotions timeline as clear as possible.

How Can I Achieve Advanced Rank When I First Enlist in the Air Force?

There are a couple of ways to enter the Air Force with advanced rank.

First, if you participated in the Junior ROTCD training, you would enter the Air Force as an E-2.

Also, you can enter as an E-2 if you have 20 college credits or are an Eagle Scout or Girl Scout Gold.

Furthermore, those who have three years of Junior ROTC training or 45 college credits may enter the Air Force with a rank of E-3.

How Does the Points System Work for Promotion in the Air Force?

After the promotions cease to be automatic at the beginning of service in the Air Force, the Weighted Airman Promotion System, or WAPS, is essential.

This exam is 100 questions revolving around responsibilities or leadership, history, and customs. The maximum points are 100.

This test is also 100 questions with a maximum score of 100. This test involves career development, and the materials studied to earn the skill level of 5.

You will receive a half a point for each month of service up to 60 for TIG.

Also, TIM earns you two points for each year in the service for a maximum of 40.

Also, you will receive points for military decorations and awards.

Lastly, the yearly performance reports from supervisors’ factor into the overall rating, as well.

When you first enter the Air Force, your promotions coordinate heavily with TIG and TIS.

As you progress in your military career, the promotions include a point system that takes into consideration your personal accomplishments and your effort.

These extra considerations are necessary due to the internal structure of the Air Force and the availability of higher up ranks. 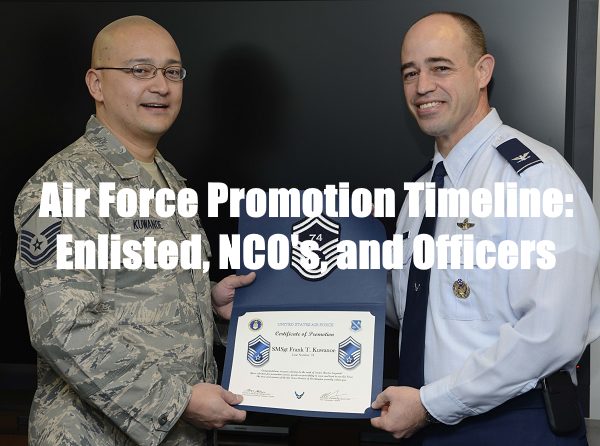 Find out what the promotion timeline is for enlisted and officers in the US Air Force, as well as how the point system works.