Even though Hawaii is a smaller state, its important location in the Pacific makes it a prime spot for military bases.

The state has 6 bases, spread across the island of Oahu and the Big Island of Hawaii.

The bases all serve different purposes, and their histories are different as well. Most were founded in the early 1900s, while one was built much later in 1955. They served through important times, including World War II and the aftermath of Pearl Harbor.

Along with typical bases, Hawaii is home to a state-of-the-art medical facility and an “open base” that is used for education and recreation.

Below, you’ll find a brief rundown on each of the six Army bases in Hawaii. In case you’d like to learn more about any specific base, links to the official sites are provided as well.

Read our full article on military bases in Hawaii here.

Overall Mission: This Army base hosts the US Army Pacific. It “commands, controls, and supports” all US Army troops who are currently deployed or stations in the Asia/Pacific areas of the world. It serves as a training facility for these soldiers as well.

Overall Mission: This is a former base that is now mainly used for tourism and recreational/educational purposes. It is an open base, unlike most that are extremely secure. It is home to the US Army Museum of Hawaii, the Center for Security Studies, the Fort DeRussy Chapel, a hotel, and a recreation building.

Overall Mission: This base aims to train its infantry division for deployment, combat, and counterattack. They also work with Fort Shafter in supporting deployed troops around the world.

Schofield Barracks is also considered the biggest Army base in Hawaii.

Overall Mission: This base is the home of Army Medicine. It aims to provide “responsible and reliable” health care first. It also works to be readiness is improved, lives and saved, and wellness levels are enhanced for US military members, their families, and their entire patient body.

Overall Mission: This is a joint base that is run by the US Air National Guard and the US Army. It focuses on “Command and Control” of nearby airspace and air operations. It is also used for training, ground operations, and is home to air defense teams.

Army Bases on the Big Island

Location: The island of Hawaii, between the volcanic mountains Mauna Kea, Mauna Loa, and Hualalai.

Overall Mission: The Pohakula Training Center (PTC) fills many roles for the US Army. They provide airfield support through Bradshaw Army Airfield, as well as logistics, public works, environmental, and cultural support. They have a vision of training soldiers that are “warriors and leaders,” and their ultimate training goal is to “deploy, fight, and win.” 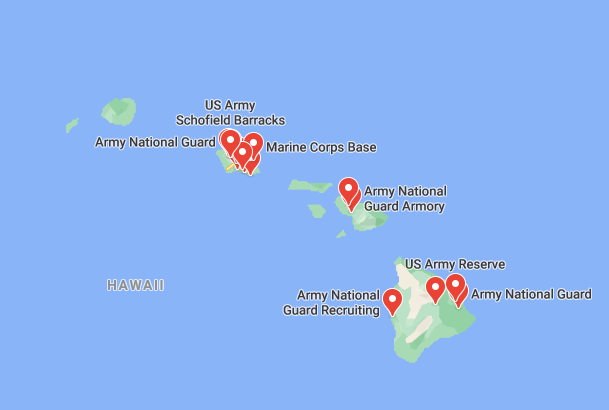